Foliage in Northwest New Jersey is different than that of New England because of our wide variety of trees. New England forests are dominated by sugar maple, which, dependent only on the first frost, provides a vivid and consistent foliage bloom, but one that is always the same. In a good year, the deep hues of oak and hickory, a pinpoint splash of scarlet oak, the mahogany color of ash, the brilliant yellows from tall, fast-growing tulip poplar, the golden leaf of the black hickory and the splendid glow from several varieties of maple, combine to produce an effect that is more spectacular.

Where can you find the most diverse panorama of tree species? An arboretum of course! That's exactly what an arboretum is: a place where many varieties of trees are grown for research, educational and ornamental purposes. In the mid 1940s, George Bloomer (1898-1978) ran a nursery along Route 31, between Clinton and Flemington. A self-taught disciple of nursery management, he, along with a dozen workers, installed groves of ornamental and native trees and shrubs that included holly, Cryptomeria, sweet gum, weeping cherry, mountain laurel, boxwood, and flowering crabapple, along with an assortment of pine, oak, spruce, and maple. Bloomer's 63-acre nursery became the foundation for today's 135-acre Hunterdon County Arboretum. Bloomer once suggested to his granddaughter, ÒThink of the landscape as a canvas.Ó He would be proud of the canvas his place provides for the annual fall foliage bloom today. 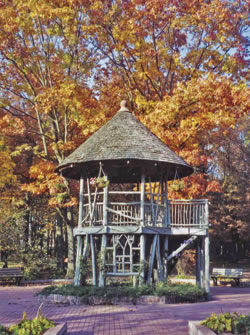 The 1893 two story gazebo at the Hunterdon Arboretum came from a farm in Flemington Junction owned by Hiram Deats (1870-1963). Back then, it was called a summerhouse.

Walking towards the deer security fence from the Arboretum parking lot, the first tree that visitors might notice is a dawn redwood, one of the few deciduous conifers in the world. Pyramidal in shape, its feathery leaves are green in summer and orange to yellow in autumn. Next to it are gray birches with branches that droop as the trees get older. Their triangular-shaped leaves have serrated margins that turn yellow. Close by are several flowering dogwood trees. These deciduous specimens have oval-shaped opposite leaves that turn to a beautiful rich red-brown color during foliage. Since they are an understory species that can achieve 30 to 40 feet in height, the colors can make an interesting backdrop against taller trees.

Inside the deer security fence of the gardens is an interpretative sign explaining the historical background of George Bloomer's nursery. Providing shade to the sign is a large cherry tree with weeping branches and foliage that changes to a green and yellow hue during cooler weather. A few minutes after walking up the gravel path, look to the right. It's not hard to miss a row of mature ÒCrimson KingÓ Norway maples and a row of Katsura trees thriving in the sun. The Norway maples, which grow 35 to 45 feet, have distinct leaves that are purplish-green color in summer and deepen to a maroon color before turning brown and falling from the branches. In contrast, the multi-stemmed Katsura trees, one of the largest hardwoods in Asia, native to Japan and China, grow to a height and spread of 50 feet in the forest. In autumn, their unique small, heart-shaped leaves, glow with bright yellow colors before changing to an orange-red mixture.

In a short distance, picnic tables are scattered among a grove of red oaks and pin oaks. Growing between 50 to 75 feet tall, the pin oaks with their broad, lobed leaves blaze with brilliant red or copper colors during the foliage season. Northern red oaks, New Jersey's state tree, have foliage that is just as spectacular in the fall. They can grow to an average height of 120 feet in forests, but have larger trunk diameters in open terrain. Oak trees have a tendency to change color later in the season than maples.

Blending into the scenery is an 1893 rustic-style gazebo that was relocated from a Flemington Junction estate to this site in 1979. As a centerpiece for the gardens, the gazebo creates character to the landscape when photographed with the pin oaks. Beyond the gazebo and the garden areas are meandering trails bathed in the richness of its season's splendor. As leaves waft gently from the trees and float on the surface of the water of a small man-made pond, look around on the banks and see the curled leaves of the rhododendrons turning yellow. The leathery evergreen leaves are shed individually from time to time over several years, but it is not uncommon to find individual rhododendron leaves that are still green, healthy and functional after several years.

The adjacent trail connects to the Outer Loop Trail, a section of which was a dirt road for pick up trucks and tractors that once worked the nursery. Along this path, there are massive plantings of sweet gum, amur cork trees, sycamores, and more. Sweet gum, with its galactic star-shaped leaves has one of the most unusual and dazzling spectrums of color: a combination of red, yellow, and orange. Further along are a few amur cork trees, named for their bark's rough texture. Found in northeast Asia, these ornamental trees grow to an average height of 30 feet. Their pinnately compound leaflets turn bright yellow during the foliage season.

Several sycamore trees grow in a floodplain not far from an unnamed stream. These towering giants can mature to a height over 100 feet, and their flaky mottled cream bark is striking. The leaves are large, averaging 4 to 9 inches across, turning yellow-green and then brown by the end of the season.

There is nothing quite so stirring as an expanse of forest at the peak of its foliage color change. The Interstates take you quickly through a wide variety of terrain and, therefore, color. Take any loop north or south on a county road and you'll find a radiant maple standing solitary in a farmer's field. Or get up high on a ridge and look over breathtaking vistas you'll remember for a long time. And don't forget an arboretum especially built for color!

This story was first published: Autumn, 2008