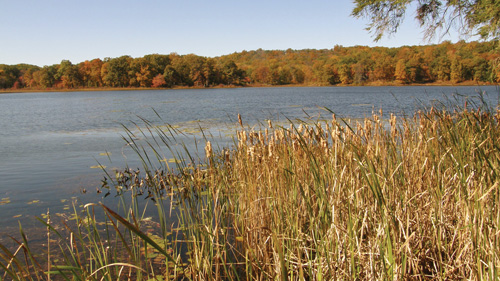 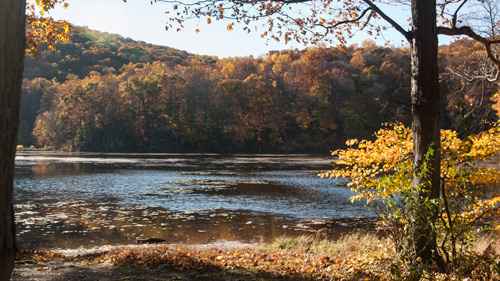 It is, except for the completion of a few bridges, now possible to hike a continuous distance of nearly 50 miles on public trails through Sussex and Warren counties on the Paulinskill Valley Trail.

Trails along the Delaware River lead to the “Ice Cave” and a vista overlooking the narrows north of Phillipsburg and Easton.

Visitors have the chance to help in environmental studies by merely carrying a turtle or lending a fish on the end of your hook. 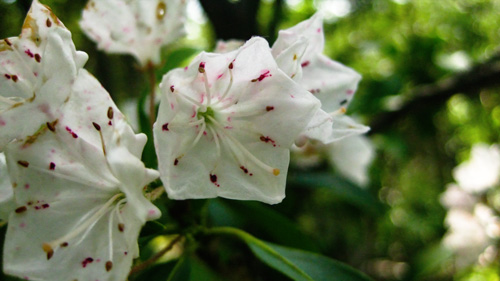 Native perennial wildflowers bloom briefly, anywhere from one to four weeks, depending on the species. That means a regular visit to particularly robust nature preserves can reveal different wildflowers blooming each time. Jenny Jump State Forest has a magical variation in elevation and terrain that makes it a rewarding site for spring forest flowers. 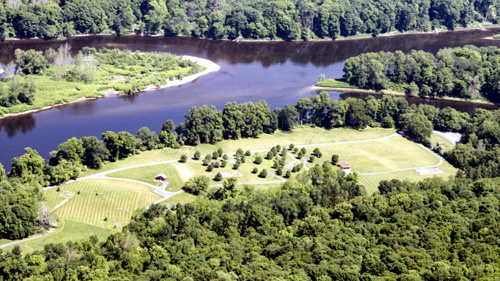 Few of the hikers, campers, canoeists, and nature lovers that visit Worthington realize that industrial pumps are responsible for the preserved wilderness and natural wonders that they enjoy there. Charles C. Worthington, a prominent and very wealthy New York socialite, sportsman, fisherman, and skilled rifleman, assembled this park in the late nineteenth century. He called it Buckwood Park. 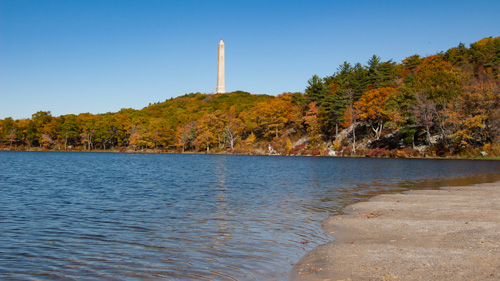 I found my thrill walking the Monument Trail in High Point State Park recently. The path along the forested mountain top at the top of New Jersey at 1,800 feet offered me palettes of color and texture that only the shallow-soil ridges of High Point can. Golden vistas of New York, Pennsylvania and Sussex County await the woodland explorer seeking gorgeous views and an enchanting w 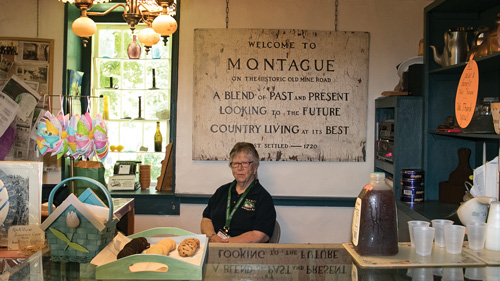 One autumn day you are likely to find yourself headed to New Jersey's northernmost corner in search of fall adventure. You may be guided by way of either of two well-known parks that converge at the top of the state in the township of Montague, and although few visitors care what zip code they're in, some exploration beyond the park borders can be quickly rewarded.

Confusing (or better, enhancing) the boundaries of where the Skylands can be found, the New Jersey State Botanical Garden at Skylands is certainly quarters for some of the best of what Northwestern New Jersey represents.

The Sparta Mountain Wildlife Management Area (WMA) lies in Sussex County off Route 517 and Glen Road near the Town of Sparta, and along the Highlands Trail. 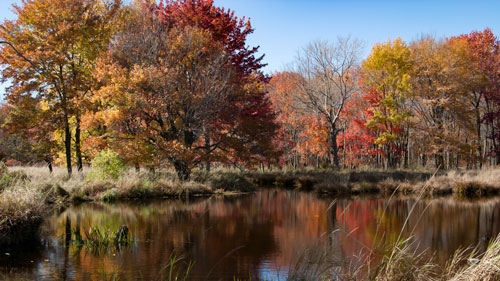 On the north side of Branchville near the top of New Jersey is a 15,482-acre playground known as Stokes State Forest. 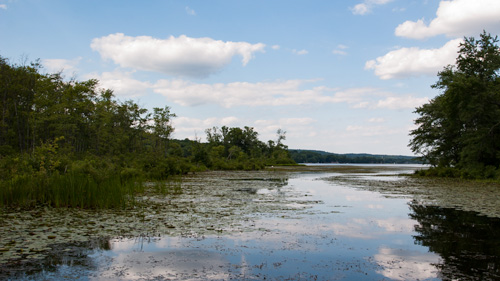 The lake is a 550 acre hole dug out by glaciers, and is surrounded by 10,000 acres of Kittatinny Mountains, its watershed.

As a major watershed, wedged between the Appalachian Valley and Ridge to the west and the Highland Ridge System to the east, the Wallkill River provides migratory and nesting habitat for waterfowl, which use the valley as a conduit between eastern Canada and the Atlantic coast and between the Delaware and Hudson rivers. 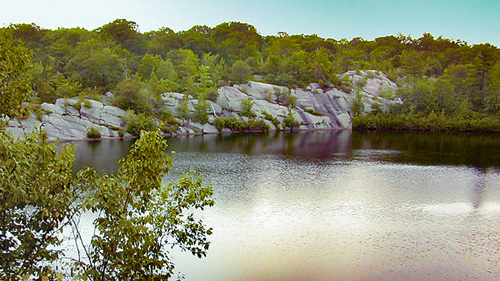 As wild as its name, the land of "winding, winding water" is home to Indian shelters and some of the best bear dens in NJ, a lake to swim and boat on, great gobs of pudding stone to climb, rock to scramble, ledges for leaping, primeval forest, 20 miles of Appalachian Trail and so much more

Today the canal's route provides a 67 mile corridor of recreation and wildlife that invites your pleasure by foot, bike or canoe.

The Great Swamp is a place where "open space" have been magic words for a long time.

On the Banks of the Wild Six

When the Jersey sky hangs white in summer haze, head to the woods at Six Mile Run in Franklin Township, Somerset County.

Opening Doors to the Natural World 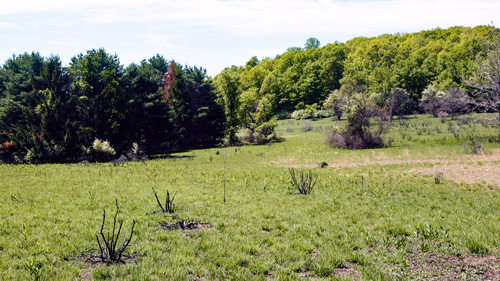 The eight miles of trails at the Schiff Nature Preserve in Mendham Township are generous with beautiful vistas, challenging terrain, and a variety of natural habitats. 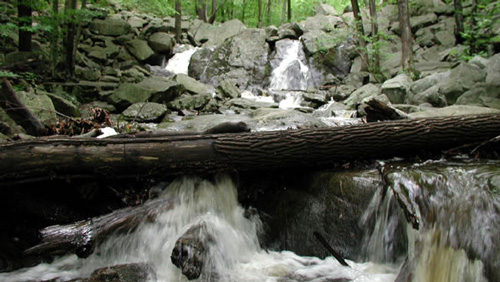 Hacklebarney State Park is 892 acres of glacial valley, with gorges carved by the Black River and two tributaries that feed it, the Rinehart and Trout Brooks. There are over 5 miles of trails. 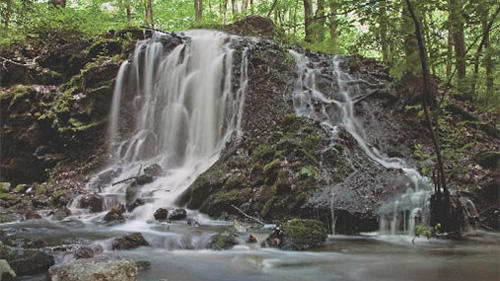 The story of one of the Northwestern New Jersey’s largest and more improbable natural treasures, a fist shaped swath of land designated in 1987 as the Pyramid Mountain Natural Historic Area, nearly 1,500 acres of wooded terrain dotted with brooks, swamps, glacial deposits, rock outcroppings glens and vistas.

View from the Tourne 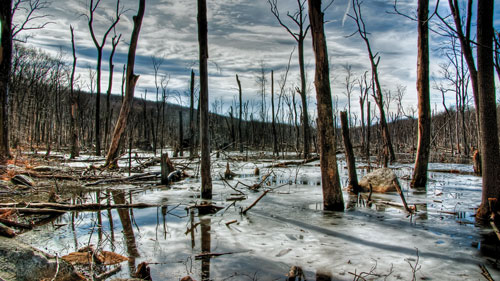 Rising beyond the eastern shore of the Rockaway River, a Passaic River tributary, stands the Tourne, a modest mountain known for its rocky terrain and spectacular New York skyline views. 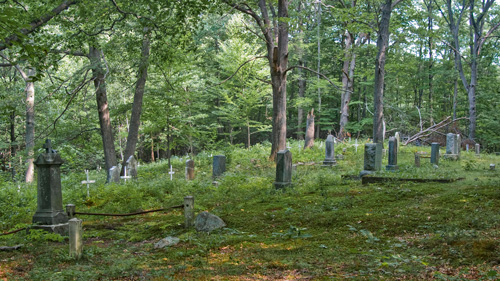 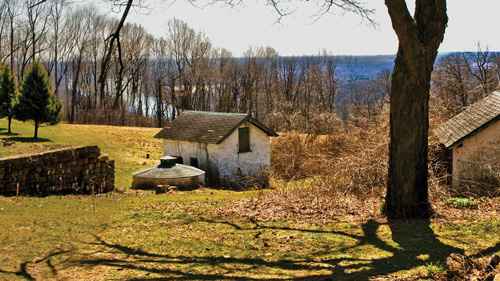 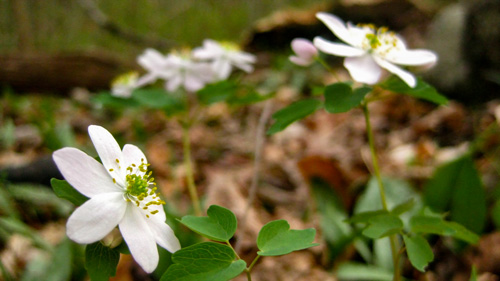 Broadly speaking, the most diverse forest ecosystems are ones with the fewest human interventions dating from modern times. Untouched land in New Jersey is rare if not non-existent. Musconetcong Gorge Reservation has a special mix of natural and human history that makes it a rewarding botanical site in the late spring months of May and June.

Foliage in Northwest New Jersey is different than that of New England because of our wide variety of trees. Where can you find the most diverse panorama of tree species? An arboretum of course!

My family and I have enjoyed many hours boating on the reservoir and exploring the terrain. 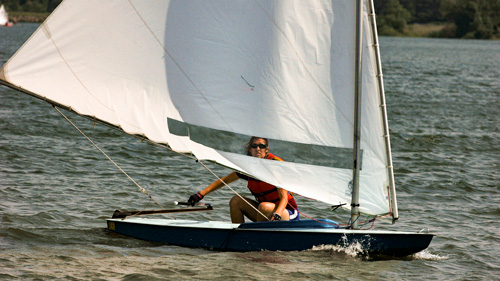 The Sunfish bucked and cavorted at the ramp, looking about as quiet as a rodeo horse and as sturdy as the balsa wood models my brother made as a boy. It occurred to me, not for the first time, that the boat was little more than a dinghy with a sail. Wind blew waves across the ramp. Cold crept in under the personal flotation device as vestiges of ancient sailing lessons crossed my brain. My first mistake: raising the sail at the launch ramp. The second: imagining I could do this alone. 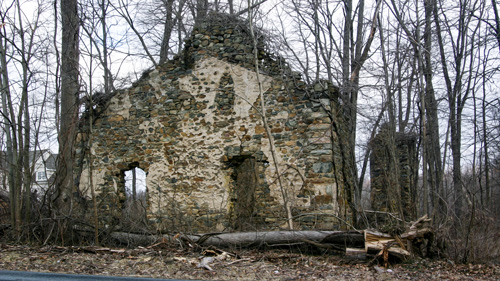 A tour along Schooley’s Mountain back roads through parks, lore, and legends.

Fishermen love these huge man-made lakes with a passion, as do campers, birders, boaters and folks out for a good hike. Within twenty miles of one another, Merrill Creek, Spruce Run and Round Valley can satisfy either the most avid outdoorsman looking for trophy fish or the casual daytripper in the market for a nice view. 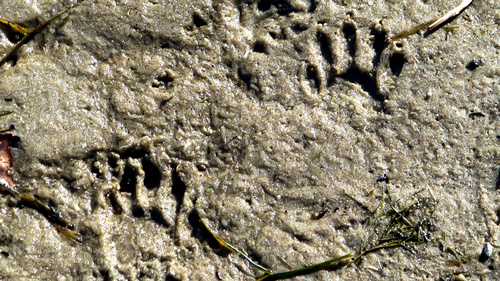 You'll have to excuse me, but when I go for a hike in a forested park, it's probably not the same walk many of you would take. That's because I am a tracker.

Along the Old Mine Road 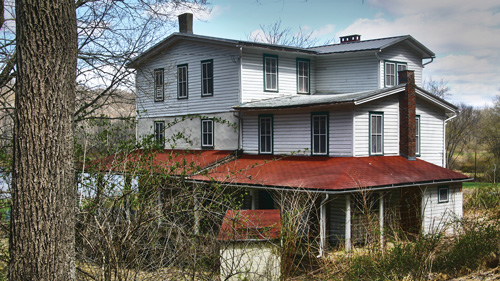 In the 1600s Dutch miners discovered copper ore in a beautiful ravine located about seven miles north of the Delaware Water Gap. To access the ore and to transport it to Kingston, New York, they constructed a road, now known as the Old Mine Road. Primitive by present standards, it was a major undertaking in its day, and legends of the road and its Dutch miners have persisted for over two centuries 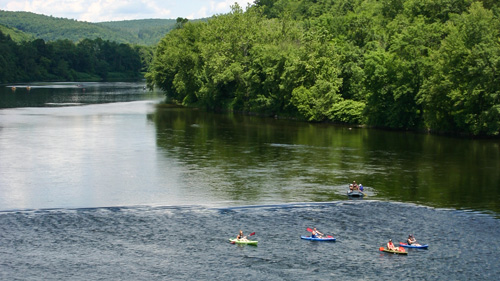 The main stem of the Delaware, 331 miles from Hancock, NY, to its mouth at Cape May Point, NJ, is the longest free-flowing river in Eastern United States.

From the wrap-around porch of the Delaware View House you can see clear across the valley just about to Bushkill, PA.

The famous notch that characterizes Warren County's western skyline is where the Kittatinny Mountains have given way to eons of gentle persuasion by the Delaware River, creating one of the most majestic of New Jersey's natural features between Mount Tammany and Mount Minsi in Pennsylvania. 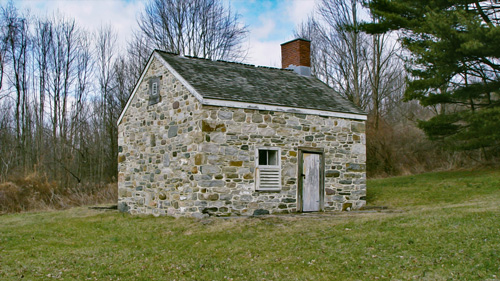 Trace a line of forts that protected New Jersey's northwestern frontier along the Delaware River during the French and Indian war.

Millbrook Village, part of the Delaware Water Gap National Recreation Area, is a re-created community of the 1800s where aspects of pioneer life are exhibited and occasionally demonstrated by skilled and dedicated docents throughout the village 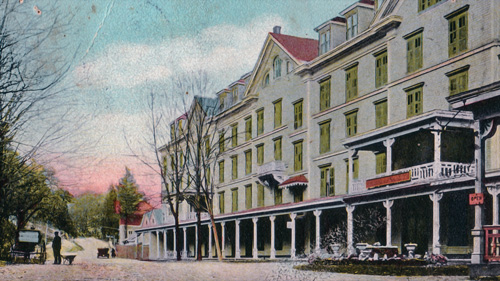 All along the Water Gap’s historic Kittatinny Park in Pennsylvania.

Mohican provides a base of operations for a wide range of trail work projects carried out by AMC in cooperation with the National Park Service.

Kim Pollard's photographs recall the wreckage left by the Tocks Island project, as well as Jean Zipser's efforts to preserve the heritage of the Delaware River Valley. 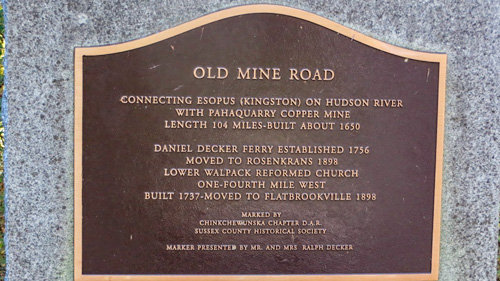 In many places along the Old Mine Road within the state of New Jersey, neglect and the sharp edge of the budget axe have scraped the pavement off the surface, and revealed the powdery and pocked dirt origins of this ancient trail, said by some to be the oldest commercial road on the North American continen 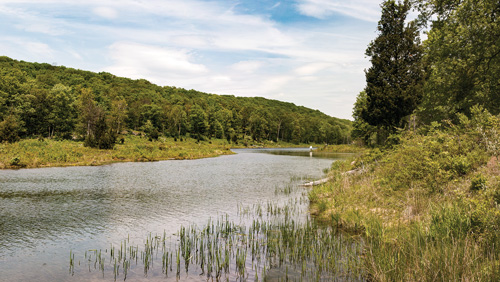 The pristine aura at Blue Mountain Lake yields scant evidence of the ambitious development for which it was created. Ironically, the land on which the community was built is still, to this day, a wilderness escape. 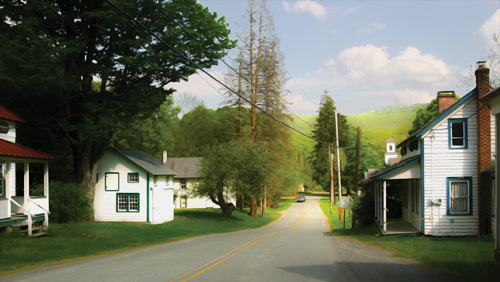 The fiftieth anniversary of Delaware Water Gap Recreation Area in 2015, which coincides with the hundredth anniversary of the National Park Service in 2016, invites reflection on the past—and a focus on the future. 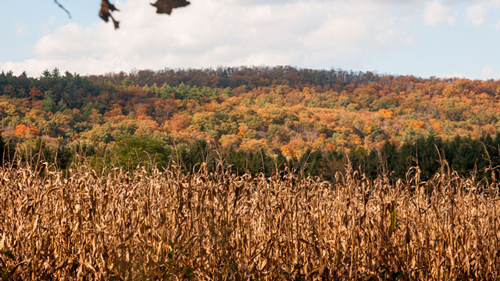 A wild and scenic countryside in Northwest New Jersey Skylands. 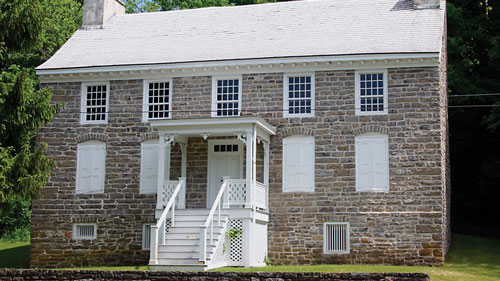 The Delaware Water Gap National Recreation Area (DWGNRA) covers a 40-mile stretch from the Delaware Water Gap to Port Jervis, NY. Interesting and scenic old roads can be found throughout the area, but none possess more mystery and legend than New Jersey’s Old Mine Road

There are waterfalls scattered throughout the Skylands region, but nowhere so plentiful than in the Kittatinny Mountains, where streams find their way down steep slopes to the Delaware River.