Strides in the business of telecommunications made by the Vails of Morristown are well known. Alfred Vail was instrumental in the invention of the telegraph in 1838 at Speedwell Village. And Theodore Vail standardized and consolidated national phone service under the AT&T umbrella in the 1880s. Today, when even many children have their own cell phone, it's hard to envision a time when phone service was totally unavailable, and even more difficult to imagine the lengths that people went to establish any type of phone service. Even in the Vail's backyard.

Sussex County had a its own telephone pioneer, a country doctor who wanted to serve patients on both the New Jersey and Pennsylvania sides of the Delaware River. In the 1890s, when Dr. James N. Miller settled in Layton, in Sussex County's northwest corner, he was frustrated by intermittent mail delivery, a railroad that was 20 miles away, and no telephone service. Situated on the eastern side of the Delaware, ice made wintertime travel across the river impossible. He tried to build his own bridge, buying the rights and franchises to an old bridge that had once stood on the spot, but he could not interest enough stockholders. He strung cable across the river and pulled himself from one side to the other in a car suspended from the cable. Later, Miller became a stockholder in the company that finally built the bridge.

In an attempt to solve some of his other communications problems, Dr. Miller set up his own telephone system. He purchased equipment from Sweden, one of the few places in the world other than the US that had telephones. He installed the battery that powered the entire system in his basement, and, to avoid patent problems with Bell, called it an "Acoustic Telephone." He strung 18 miles of wire fastened to trees from his office in Newton across the Delaware to his office in Dingman's Ferry.

This time his efforts were quickly rewarded. His venture was incorporated as the Sussex Telephone Company in 1897 by some New York City businessmen with Miller as a major stockholder. Lines were built from Layton to Branchville and connected to Dingman's Ferry. Telephone exchanges were also established in the towns of Newton and Sussex. Meanwhile, Miller sold his medical practice and moved to Newton to pursue some serious entrepreneurship. In 1900 he purchased all the interests of all the other stockholders, becoming sole owner of the phone company.

Early customers of Sussex Telephone were held largely responsible for their lines. Before the company would provide them with service, most even had to provide and set up their own poles. Still, the demand for telephone service grew, and, by 1910, the company served 450 subscribers. In 1911, the replacement of the magneto board in Newton with a modern common battery board provided the area with the most modern service available.

Shortly before Miller's death in 1929, he sold the concern to a holding company. The subsequent owners initiated a number of improvements, including the first dial office installed at the Lake Mohawk resort area in Sparta. By then the operation served 1900 customers; so successful that larger phone companies traveled to Sussex County to study the service and the economy of operating tributary offices in outlying districts. By 1932 the company operated 2,500 telephones, eventually converting all of its equipment to dial service. 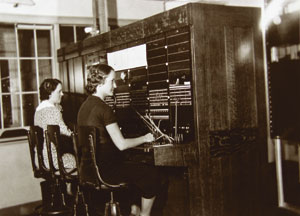 The big board at Sussex Telephone

After its acquisition by United Utilities in 1953, Dr. Miller's company grew in leaps and bounds. Through a series of subsequent acquisitions, United Telephone eventually became a part of the nationwide telecommunications company, Sprint. In 2006 the former local telecommunications division of Sprint became a part of EMBARQ, which has since morphed into Century Link.

The company offers residential customers reliable local and long distance service, high-speed Internet, wireless and Dish Network Satellite. The company also has a comprehensive range of flexible and integrated services designed to help businesses of all sizes. Dr. Miller would be proud indeed to see his efforts to satisfy his own need for reliable communications develop into a nationwide corporation, serving the communications needs of customers in 18 states.