Sometime before dawn on the second day of November the little black came into the world. Like his littermates, he was born with eyes closed, and over the next fourteen days remained utterly dependent upon his mother, a good-natured five-year-old Lab. Neither top dog nor runt, the little black spent the following six weeks under her watchful eyes while rough housing with his four siblings, especially his sister, Lemon, the only female of the litter, whom he came to favor. He shared a red-and-white cloth toy with one of his brothers, a pup the breeder named Little Bobby, and was curious, but only mildly so, when one morning he found the frail pup gone.

The little black was vaguely aware of the breeder and her husband, and a few others of their kind, who came and went, making reassuring sounds, caressing him with affection that over time he came to enjoy.

One afternoon, a woman whose scent he now knew, carried the little black to her truck. The puppy whimpered during the twenty-minute drive, but the anxiety he felt from the foreign smells was quickly forgotten when the woman lowered him to the floor inside her home, a man quickly gathering the little black in his arms, the man’s face close to his, the man’s smell non-threatening.

Before he could explore his new surroundings, one of his own kind, a large Retriever, rushed into the room. The older dog was a male, younger than the little black’s mother, but solid, with broad shoulders and a strong head. He bore a serious expression as he approached the young dog, causing the little black to back in between the man’s legs. During the next hour, the two dogs danced around the man and woman, sniffing each other as they established the boundaries of what would become a lifelong relationship.

Snow fell a few days after he arrived at his new home and continued through January and all of February. By Valentines Day, the little black had become self-assured, having experienced in that short time lessons that would carry him through the remainder of his life. He spent part of each day sparring with the older dog, their mock battles accompanied by flashing teeth, loud grunts and ferocious growls. There were times when the woman would break them up for fear that they might go too far, but the little black no longer feared the older dog. Quite the opposite, he gave as good as he got, aware that the big dog would give up the fight at the slightest squeak, a signal that the puppy had had enough.

While the two dogs shared the water bowl, a single snap of the jaw taught the little black to leave the older dog to his food. The woman seemed to be there whenever it was time to eat, adding water to a bowl when it was low and changing his litter pan when it was damp. The man, who was gone for long periods of time, tended to lower himself to the floor whenever home, allowing the little black to have his way with him.

There were cloth toys to play with and bones of different shapes and sizes stacked in a wicker basket that the little black shared with the older dog. On occasion, he’d nibble on the basket or a wooden leg of a chair until either the woman or the man (more often it was the woman) made noises that would not stop until the little black lost interest and moved back to one of the toys.

During that first February, the little black came to enjoy the snow in which he and the older dog romped without restraint. The white flakes melted into his thick coat while freezing to his whiskers that curled alongside his snout making him look like a tiny walrus. Songbirds flew into the air in great waves whenever he approached their feeders, the little black coming to know a family of crows that complained about his presence from the limbs of a dogwood tree. 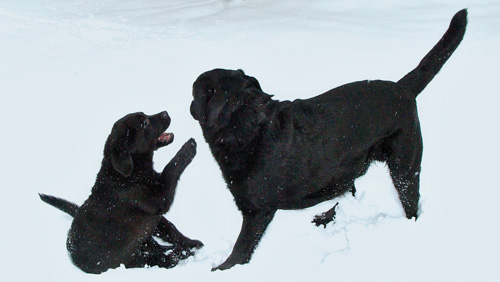 Once, while the man carried cordwood into the house, the little black wandered off toward the bird feeders on his own. Curious as to why the titmice, chickadees and finches were nowhere to be found, he smelled something that made him anxious, but could not quite identify this new scent. The little black had sometimes felt this way under the watchful eyes of the crows, but this feeling felt more intense. Hearing the older Lab’s bark, the little black scrambled down to the lower field unaware of the red-tailed hawk whose stare followed him from the uppermost branches of a maple tree.

On an afternoon in early March, the woman carried the little black down to a big black gate. An electric fence separated the fields surrounding the house from a woodlot also owned by the man and woman. Beyond the woodlot stretched greater woodland of more than one hundred acres, consisting mostly of different oaks and maples, but also tulip, and shagbark hickories, ironwood and beech, with a few stands of poplar and sassafras. A pond lay on the far side of the electric fence between the fields and the edge of the hardwoods. Although unusual for that month, the pond remained covered in snow.

On the earthen dam behind the pond, stood a family of four deer, two yearlings born the previous spring, a third born the year before, and their mother, a stately doe that had survived many seasons and was known to the woman. When the woman placed him down, the little black began to bark, which brought the deer’s ears forward, but although noses twitched, tails remained down, the family seemingly unconcerned with the high-pitched sounds emanating from the other side of the fence. When the mother took a step forward, her right hoof stomping down on the snow, the little black backed toward the woman, his own tail tucked between his legs.

During the second week in March, the little black accompanied the older dog and the man down the long drive that curved in the shape of an S and extended from the house to the macadam road. The man stopped to make encouraging noises when the little black squatted to pee. It was a breathless evening, less than an hour before dark and afterward, the only sound was that of the snow crunching under the man’s boots.

On the way back, the little black followed the larger dog over a snow bank. The dogs paid no attention to the man’s cries that grew faint the farther into the wood they progressed. Although the big dog was able to plow through the drifts that rose around his shoulders, the little black was forced to jump on all fours reminding the man of a porpoise he had seen on the Nature Channel. Neither dog noticed the small flock of blue birds that flitted a few feet ahead of their advance.

It wasn’t until the first week of April that the little black felt wet blades of grass under his pads. On one of his walks, he discovered skunk cabbage, the variegated heads poking through the patches of damp snow that remained in the swamp-like declivity along the bend in the drive. By then, the little black had grown familiar with the fields and woodlot and the deer, songbirds and crows that lived there, but as his paws sunk down past the melting snow and into the soft earth, he heard a new sound, a loud honking from high in the sky. Looking over at the older dog, something the little black tended to do whenever confused or concerned, he followed his stepbrother’s gaze toward a v-shaped squadron of Canada geese.

Later that same afternoon, while chewing on a string of bark he pulled off a chunk of stove wood, the little black was startled by a field mouse that scampered out of the dwindling woodpile and crossed over his paws, on the way toward a hole under the lean-to.

During the second week in April, the little black encountered a cottontail that zigged, then zagged as the excited dog chased the rabbit from the open field in front of the house down through a thicket of wild rose and raspberries, losing her in the lower field that the man had allowed to go fallow. The little black sniffed at a hole dug into the earth below a barberry bush, eventually moving on to more interesting smells. What he did not know was that the rabbit had led him on a merry chase away from the hollow she had laced with her own down and where a litter of five pups lay as blind as the little black and his mates had been five months earlier.

During the third week of April the snow had receded from all but the most shaded corners of the twelve acres surrounding the home of the man and woman. By then, the chipmunks and rabbits had nibbled on the crocus that had flowered, the daffodils soon to brighten the gray landscape.

Over the winter, the woodchuck that made the hole used by the rabbit had developed a thick film over his left eye. The groundhog’s coat was marred where he had been bitten by a fox near the end of his fourth summer and one of his legs dragged behind him, the result of a stroke he’d suffered the previous fall. But having survived his sixth season, the partially blind rodent waddled out onto the short grass beyond the edge of the lower field to enjoy the springtime sun. On the same afternoon, the man had gathered his gear to go fishing in a nearby stream, at the last minute deciding to take the older dog while choosing to leave the other at home.

Without the older dog to play with, the little black became bored. While the woman performed her weekend chores, he lazed about the back porch, chewing a leaf he’d pulled from a spider web. At first the little black did not notice the dark lump along the edge of the grass.

Seated at the kitchen table, the woman rose about the same time as the young dog bounded down the stairs. The little black had more than doubled in size since arriving at the home of the man and woman, and although visibly smaller than the older dog, he had crossed the lawn by the time the woman opened the door, in his zeal paying no heed to the loud sounds coming from the porch.

Although partially blind, and lame in one leg, the old dodger felt the dog’s vibrations and quickly scrambled into his den, leaving the little black with his ears still ringing from the irritating sounds made by the woman. After raising his leg beside the woodchuck’s hole, the little black turned toward the porch. He wondered if the woman might feed him. His tail began to wag at the thought.

Those of you who enjoy Bob Romano’s column will appreciate his series of novels. North of Easie ranked second in the New England Outdoor Writer’s Association’s contest for Best Book of 2010. In West of Rangeley, he provides insight into how people living in small towns deal with such world-changing events as 9/11. Political commentator, Tucker Carlson, had this to say about Bob’s latest book, Brook Trout Blues: “Romano’s novel is like a vacation. You can smell the pine needles on every page.” For a limited time only you can purchase an autographed copy with free shipping of any of Bob’s books by emailing him at magalloway@mac.com Bob will provide a presentation at 7pm, on April 9th, 2015 for the Warren County Arts at its monthly meeting located at the Oxford Municipal Building.

This story was first published: Spring, 2015