Incorporated in 1845, Blairstown Township was named after leading resident John Insley Blair, who was associated with the Scrantons and others in the development of iron-mines in the vicinity of Oxford Furnace. His interest in the building of railroads for the transportation of the outputs from the mines led eventually to his primary interest in the Delaware, Lackawanna, and Western railroad, a dominant force in New Jersey transportation history. He was instrumental in the founding and construction ofBlair Academy (1848), a prestigious preparatory school, also a designated Historic District comprised of 22 buildings on 550 acres along Route 94 near Main Street. For the public, the Academy offers a public golf course and the Armstrong-Hipkins Center for the Arts which hosts music, dance and theater performances in a 500-seat auditorium. 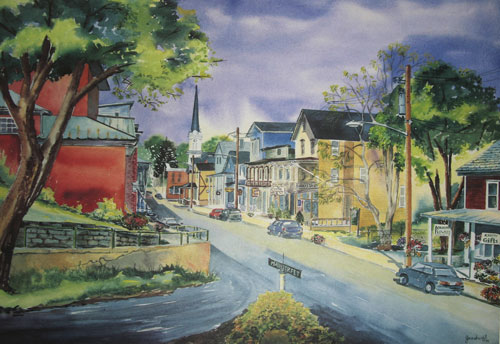 This 1995 painting by artist Jan Swift, looking from Old Academy Drive east down Main Street towards the Presbyterian Church, shows contemporary Blairstown much as it appeared 100 years prior. Prints are available at Gallery 23 on Main Street.

The Victorian homes on Blairstown’s Main Street and a 19th Century stone mill give this village along the Paulinskill River a distinctive historical flavor complemented by interesting specialty shops, galleries and restaurants. Gallery 23 showcases a growing community of local artists, featuring fine art, sculpture, designer jewelry, art glass, pottery, photography and more. The township consists of charming homes of diversified architecture, farmland and recreational facilities. Blairstown Airport is open for public use, and glider flights are also available. The town hosts an annual Fourth of July Celebration and a Fall Festival.

Northeast of town on Route 521 in Hardwick, a 69-acre glacial lake lies within the 665-acre White Lake Wildlife Management Area. The property, acquired through the state Green Acres Program is partly owned by Warren County, managed by the Division of Fish and Wildlife, and enjoyed immensely by fishermen and outdoor enthusiasts. There is car-top boat access to the pond early christened for the color that sparkles up through its clear waters; the whiteness caused by shells which covered the entire bottom. The white mineral product, called marl, was once mined as a vital additive to cement. Several hiking trails in the area are maintained by the Ridge and Valley Conservancy which protects and preserves natural areas, including woodlands, meadows, farmlands, wetlands, marshes, ponds, watercourses, and historic sites, that constitute the rural character of the Kittatinny Valley and Ridge region of New Jersey.

White Lake discharges from its south side to a stream that makes a brief trip downhill to the nearby Paulinskill River. Along the river the 26-mile Paulinskill Valley Trail, part of the linear Kittatinny Valley State Park, follows abandoned railbeds heading southwest from Sussex County through Fredon, Stillwater, and Blairstown, ending near the Delaware River at the Columbia Lake Wildlife Management Area in Knowlton Township. The flat, cinder-based path is easy for walkers and perfect for horseback or mountain bikes. In addition to abundant wildlife, the attentive will notice a progression of artifacts from the rail era, from station foundations, mileage and whistle markers, cattle passes, battery boxes, railroad bridges, creameries and ice houses that serviced the lines in their heyday. A gigantic concrete bridge spans the Paulinskill at Hainesburg. The huge viaduct, one of two completed on the main rail line of the Delaware, Lackawanna, and Western in 1909, remains fascinating. Not only remnants from the great railroads, but also signs from the mining and agriculture traditions of the region are apparent.