In January, 2011 Tri State left the Cresent Theater. The organization now presents performances in various locations in the region.

This organization has been located in Sussex County since 1988. Its original name was the Ranger Summer Theater but was later changed to Tri-State Actor's Theater. Its first home was in Branchville, at the Garris Center. Here, other groups were also active and at times the Garris Center was overworked. TAT recently received a sizeable Dodge Grant to produce more performances of more plays; this made necessary more available space than Garris could provide. In the fall of 2002 TAT moved. 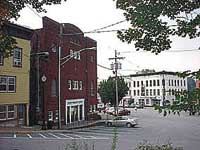 The renovated Crescent Theater adds to a vibrant and growing professional arts community in Sussex Borough.

The new home is the stately old Crescent Theater in Sussex Borough at Fountain Square, at 74 Main Street. The 3-story brick skyscraper originally opened for its theatrical business in 1917 and brought almost all the forms of entertainment to town, including vaudevilles, minstrels, Shakespeare, musicals, modern drama, as well as the first talking cinema to appear in the county. Then, for a while, this fine, theatrical center, went into a decline. Now, however, with the active TAT leading the way, things are looking up.

Director Meacham introduced his first production at the Crescent Theater in December, 2002, just before Christmas. The show was entitled Santa Land Diaries and in conjunction with the holiday every performance had a full house; and it had only one actor. This Sussex County location is not far from both New York and Pennsylvania State borders, a tri-state location that inspired the company's name and also attracted many eager out-of-state theatergoers. And right now, rehearsals and scenery construction are under way for the early spring production.

All the work's a stage. Director Meacham surveys his project to be open for business this spring.

Director Meacham was, for many years, a professional actor himself who performed in theaters all over the Untied States but especially in Manhattan and Hollywood. He can't wait to get under way, as the director, this spring. He says, "Our new location and our new name reflects the development of our acting company into what it is today, a theater that reaches out to a much wider and more diverse audience with a greater number and variety of productions for both adults and children."

July and part of August are devoted to the Children's Theater. This younger generation is on school vacation now and can devote more time to their acting skills. This is a training situation for talented young people from this area, under professional instruction. This group is called the Interim Summer Company. Young people from 13 to 20 get theater training and a chance to perform. It's a vigorous internship program for these young people and Director Meacham plans to do two shows each year with them. He considers the involvement of young people as essential to the survival of theater.

For those who have been attending Broadway Theater in Manhattan, the prices here are considerably more reasonable. An opening night performance charge can be from $20.00 to $22.50. And that wonderful Sunday afternoon show is even less, from $18.00 to $20.00. And Children and Senior citizens get an additional discount off these low ticket prices.

Something exciting and wonderful has arrived in Sussex Borough, a theater run by devoted and generous professional directors and performers.

This story was first published: Spring, 2003