Kitty Fox in the early days.

In the middle of a fast food parking lot, I slowly unfolded the flaps of a plain brown cardboard box. Three balls of charcoal gray fuzz were curled up inside on top of a ratty old towel. The smallest two still had their eyes sealed shut since birth, ten days before. The largest gray fuzz ball was four weeks old. Eyes just opened, she looked over her shoulder forlornly with pitiful expression that said "I'm scared". Curled tightly around her cousins, she tucked her tail tighter between her legs. She spoke to me without words. She won my heart in that moment.

"Hi, pretty kitty," I cooed in my best loving mommy voice. I scooped her up in my hand, and she curled into a smaller ball, trying to disappear. "It's alright, baby girl," I said.

I knew the three little foxes were girls. That is what I had ordered from the fox farmer: one for Space Farms, and two for the Staten Island Zoo. We both wanted handle-able foxes for our exhibits.

"These are red foxes?" I questioned the farmer. "They are so dark." I did not want my ignorance to show, but I knew I had ordered red foxes, and these babies were definitely charcoal gray. Maybe he had brought me silver fox babies by mistake?

"Yep, they will turn red at four weeks," the grizzled, bearded man stated. "See, this one already has a red face."

I felt foolish that this particular piece of red fox information had not been passed down to me, verbally or genetically. Learn something new every day! 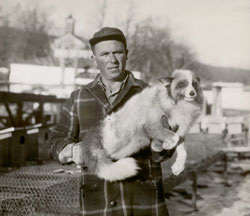 Ralph Space (above) and his grandaughter, Lori (below) 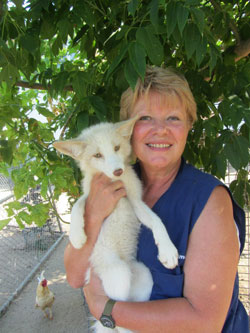 I picked up the other two babies, each not much bigger than my fist. I looked in their ears, at their sealed eyes and at their bottoms. All were clean, with no visible sign of infection or discharge. The kits seemed to be in good shape. After I gently place each kit back in the box resting on the hood of the farmer's white truck, we conducted our business. I took his State of Pennsylvania Propagation License number, his truck license plate number and he took all the info he needed from me, the Space Farms U.S.D.A number, phone numbers and State of New Jersey Zoological Exhibit and Captive Game permit numbers. Whew, the paperwork!

I must admit I felt a little strange, doing business on the hood of the fox farmer's pick up truck in the back corner of a fast food parking lot. We said our goodbyes, and the friendly fox farmer told me to call him if I had any problems. "It was a six hour trip, they are probably hungry," were his parting words.

My green SUV grumbled up High Point Mountain as my mind raced. If my grampa Ralph could see me now! He would be so proud. He started Space Farms as a fox farm. I knew my Dad, Fred, knew all about foxes, and I could rely on him for help if I needed it.

Upon my arrival back at the zoo, I mixed up Esbilac, the formula used for the canine family. A two to one ratio of H2O and powder. I offered the kittens the bottle. They did not like the taste of the rubber nipple, but they would have to learn how to suck on a bottle instead of Momma Fox. It was a struggle, but each drank two ounces. I put them in their cardboard box bed to sleep on a heating pad covered with a clean fluffy towel. They slept soundly for the next three hours. It had been a long, exhausting day for three little fox girls.

The red fox is not indigenous to New Jersey. The North American Fox's territory was from Canada to northern New York State. When the first English settlers came to America, they brought the custom of fox hunting with them. In 1650 and again in 1750, European Red Foxes were brought across the ocean in the same ships as the settlers. Some of the foxes escaped the hunt and lived in the American wilderness thereafter. The European Red Fox will breed with the North American Fox.

Foxes eat small rodents and vegetation, which are plentiful in this section of the country. Their sharp sense of hearing and sight can help them locate a mouse 300 feet away. The fox has vertical pupils, like a cat, and walks like a cat, placing the hind foot in the front foot's footprint. The adult fox's fur is silky like a Persian cat. However, foxes are members of the canine family, like dogs and wolves.

A full-grown fox will weigh eleven pounds, but looks much bigger due to fluffy fur and long legs. Its tail is up to one foot long and is used for balance while jumping, and for communication. The colorful fur of an adult red fox is made up of two sections, the under-fur and the guard fur. The under-fur is fuzzy and warm. The guard hairs are up to two inches long. This combination makes the fur of the fox soft as a cotton ball. The red fox has red fur on its back, white on it's belly, and charcoal-black legs. Every red fox has a white tipped tail.

But the babies I had were all still charcoal gray! Boy, I hoped I had not been snookered by the fox farmer. I double-checked with my Dad and my brother, Eric, who both had much more experience than I did with foxes. Both assured me the little girls would turn red.

By the next day, after four sloppy sessions, the three foxes were drinking well from the bottle. Whew! One worry off my mind. On the third day the little foxes were with me, the biggest, Kitty, was walking around. The two smaller foxes, Vixen and Lady, still slept most of the time. "Vixen" is the term used for a female fox, like a female horse is called a mare, or female cattle are called cows.

Foxes are very vocal, communicating with yips, growls and pants. Foxes are also "crepuscular", active at dawn and dusk. This caused a problem in our house, as my husband was not happy with the dawn wake-up calls made by the kits. They woke up hungry, yipping for mom; and that was me. Often between feedings the kits wrestled and played, screaming like an old lady.

They quickly grew stronger and larger. By five weeks old each kit was eating wet dog food, and running around the house at night. By day, they would travel with me to the zoo and stay in the nursery's center enclosure.

I knew two would go to the Staten Island Zoo, but not which two. I hoped I would be able to keep Kitty, my favorite. I had separated her from the two smaller girls because she was two weeks older, so much stronger, more coordinated and would terrorize the other little foxes while playing. Kitty needed a playmate; so that was me, after 10pm on my living room floor. I bonded with Kitty. I gave some serious thought to keeping her as a house pet. Since I live on the zoo property, that might be legally OK? Foxes do have scent glands, the smell slightly less offensive than a skunk, and I considered having them removed in order to keep her as a pet. Somehow I could not do that, she was as God intended her to be, scent glands and all. I hoped she would stay with me at Space FarmsÉBut the Staten Island Zoo was to have their pick of two out of the three babiesÉ What would I do if they wanted Kitty? Staten Island is so far away.

And then surprise! The Space Farms zoo's resident female fox had just brought an offspring out of her den at the zoo.

The next few weeks passed quickly, springtime is a busy time for the Zoo Momma (me). Daytimes were filled with hard chores and visitors' questions. The nights at home were hectic with three little foxes running through the house, but fun. My Three Musketeers were mischievous, nipping at my heels, running behind the TV to hide, then pouncing on my toes. They were under the couch, on the couch, and chasing each other through the legs of my dinning room chairs. A favorite game was dragging the clean laundry out of the laundry basket. Or I would glimpse a fuzzy white tip tail wagging, burrowed under a fluffy green towel in the basket. The foxes were ten weeks old and I was exhausted just watching their playful antics. And my home was getting smelly.

The curator from the Staten Island Zoo called and made the date to come pick up their foxes. It was a difficult day, but I was delighted when the curator chose Lady and Vixen. It didn't hurt that Kitty was aggressive with her cousins, it made their decision easier. So Kitty stayed with me a little longer. I would brush her long, luxurious, now abundantly-red fur daily in our play sessions at the zoo. She was a sweetheart, rarely nipping as foxes are known to do. 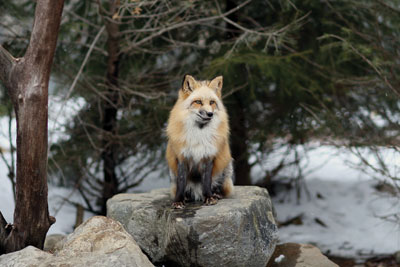 Kitty Fox, AKA Sierra, at home at Lakota Wolf Preserve in Columbia.

With the birth of the zoo's resident fox, Kitty needed a new home. It was a tough decision for me. But I knew just the folks that would love her as much as I. I knew Dan Bacon, Jim Stein and Becky Mace from the Lakota Wolf Preserve in Columbia, NJ. They stopped in the zoo occasionally to say hi. The next time Becky and Jim came by, I knew all I had to do was put Kitty in Becky's arms.

Becky and Kitty immediately bonded. It was good. Jim and Dan decided to take my Kitty Fox. The hardest part of my life is placing the animal babies I have cared for and loved. I have visited Kitty, who is renamed Sierra, at the Lakota Wolf Preserve and know that I made the right decision for my little girl. She is doing well, and has a playmate now.

I have recently raised platinum, silver and gold cross foxes for our family zoo. I'm sure my grandfather Ralph, would be proud. The foxes' antics never cease to amaze me and our zoo's visitors. Smart, clever and sly, the members of the fox family are fascinating to watch. Would I ever wear a fox fur coat? Well, I prefer to wear my fox fur alive!

Lori Space Day, author of the book, "The Zookeeper's Daughter" is Zoologist and Zoo Momma at Space Farms Zoo and Museum in Beemerville.

This story was first published: Autumn, 2012