The history of the Warren County Farmers’ Fair is a checkered one. The event that we know today — an agriculturally based, family oriented exposition — was a long time in coming. It almost didn't make it.

The first fair was organized in 1859 by a newly formed group with the impressive title of "The Warren County Farmers' Mechanics' and Manufacturers' Association". The fair was held on a 20 acre piece of ground leased from an Association member named Abraham McMurtrie, and was located just south of Belvidere on what is today Route 519. Buildings and grandstand were erected, as well as a half-mile dirt track for horse racing. There were, of course, displays of equipment, produce, and farm animals, but the biggest attraction -- and money-maker-- were the races. The Association chairman was Judge William Sharp who, within a year, would be killed in the explosion of the "Alfred Thomas" on the Delaware River. Perhaps this was an omen.

The first fair was held in October and was plagued by cold, rainy weather. Nevertheless, it drew 6,000 visitors in four days, and the county seat's four hotels and numerous taverns did a booming business. 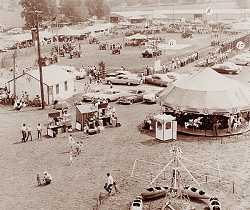 The Warren County Fair was held here annually with varied success. The second exposition didn't do as well as the first, and then the country became involved in a bloody war and wasn't in a celebratory frame of mind. In the 1870s the nation fell into one of its worst depressions which hurt attendance. The fair became, more and more, a place to bet on horses to the exclusion of all other activities. Warren County historian, James Snell wrote in 1881: "The tendency of the fair in late years has been towards the speed of horses, which in an agricultural county like this, should not be permitted."

In addition to the gambling, local newspapers complained of the public drunkenness and general rowdiness that took place at the fair. After the 1882 event, because of public criticism and falling receipts, the fair was discontinued, and the land returned to the McMurtrie family who plowed under the race track and planted corn.

In 1890 another diversion was introduced in Belvidere, called the "Farmers' Picnic". It was held, usually, at the county park opposite the court house in the very center of town. Special trains brought people from the outreaches for the one-day affair. Politicians attended to shake hands and make speeches. Woodrow Wilson, running for the New Jersey governorship, appeared n 1910 and drew 40,000 people. In 1935, when the National Bank of Blairstown was robbed by a band of desperadoes, nobody notices; most of Blairstown was at the Farmers' Picnic.

Unfortunately, the drunkenness and vice that marred the original events soon appeared at this one. Worse, the mischief now took place on the immaculate lawns of the fine homes and churches that surround the county park. In 1937, to the relief of almost everyone, the Farmers' Picnic was discontinued.

A few years earlier, the Farm Bureau and the county Board of Agriculture had begun holding an exhibit at Butlers Park on the banks of the lovely Musconetcong River in Washington Township. With the passing of the Farmers' Picnic, this event was expanded but with the agricultural emphasis retained. Four-H activities were introduced here for the first time. These exhibits and machinery and animal displays attracted the county's farmers and their families. The crowd increased in size, and, in 1949, the event was moved to a larger property in Harmony Township. In 1951, the fair association purchased land for a fairgrounds nearby, which became the Warren County Fair'' present location. By 1954, the event had been expanded to a four-day exposition, and additional land was acquired for more activities and parking. This fairground is located on the west side of route 519 in Harmony Township near Harkers Hollow Golf Course. 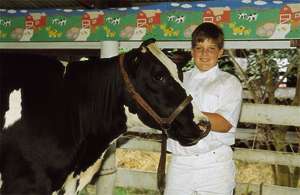 The Fair Committee has been careful to maintain the agricultural ambiance of the exposition. There are some carnival rides for the children, but the problems that haunted the earlier fairs have been avoided. The present fair holds a special place in the hearts of Warren Countians, whether farmer or computer programmer; it gives us all a chance to examine close up the rural life and lifestyle that built the county. This year the Fair will be held from July 31-August 7. More about a road trip to the fair...

Frank Dale's book, Delaware Diary, Episodes in the Life of a River, is a chronicle written both from research and his personal experience. Major historical events, little known incidents, and the natural history of the Delaware make fascinating writing in Dale's hands.