Story and Photos by Bob Koppenhaver

Ever wonder what critters do when you're not around? What are they up to when they're not running away from you? Do they have a night life? You may have a good idea, but how often do you get to watch? Have some fun spying on your neighbors in the wild by getting hold of something called a trail camera. 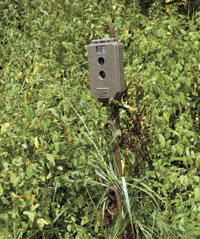 Trail camera in the bush.

Most outdoor gear merchants sell specialized small self-contained weatherproof digital cameras that are triggered by the motion of subjects moving through the viewing field. Originally intended for hunters monitoring preseason game animal activity, they vary in price from around $50 to $800 or more, depending on specific features. Usually powered by standard alkaline batteries, some models shoot still photos, others record short video clips, and some do both. In effect, your wildlife subject will snap its own photo for you, day or night. When something moves within the camera's sensing range, usually up to 50 feet distant, the shutter goes to work. 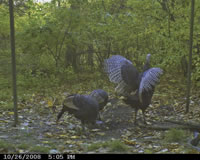 Frequent turkeys scratching for food or digging a small pit, an occasional opossum sauntering by, and infrequent cats and dogs have been subject for the game cameras. Even an American kestrel was captured as it flew within inches of a camera. Surprisingly the cameras have caught no bears, or bobcats, or coyotes-not yet anyway. But the cameras are out there, patiently waiting.

Although most game cameras are designed to be activated solely by motion, some also have a time-lapse mode which will trigger the camera at pre-set time intervals, regardless of whether the subject is moving or not. Time-lapse photography may be used to capture the progressive movement of clouds, flowers blooming, progress of building a nest, or any other subjects that capture the imagination. While most current game cameras have a preset focusing range of approximately 15 feet to infinity, some newer models can also focus on closer subjects, like birds at feeders.

After you set up a trail camera, you can return hours, days or weeks later to retrieve the images recorded on the camera's memory card. Each photo notes the date and time at which it was taken. Some models also include the phase of the moon and temperature. As with regular digital photography, you can review your pictures on site with a portable image viewer or bring the camera's card to your laptop for review, editting, and storage. Some models also have a built-in LCD image viewer for viewing in the field.

Some special wireless game cameras even eliminate the need to re-enter the area to check results. Once set up, these models will send each image as it is shot to your cell phone, PDA, or to an internet Web page!

Night Shift: The scenes above were a few of those that took place under the same apple tree last fall. Two instances were recorded of bucks sparring with each other one moment, then browsing side by side the next. Individual bucks became familiar by the shape and pattern of their antlers. Does and fawns were frequently shown searching the ground for browse. Many images showed them nose down, alone, searching for a mother or offspring from whom they had been temporarily separated.

To produce full color photos at night the camera must have a standard flash. Invisible infrared (IR) flash is also available in some models but will produce only a monochrome image, usually with less detail and more "grain" than a standard flash photo will have.

So where do you set up a trail camera? Your own backyard is a good place to start. You might be amazed at the wildlife wandering through, even in urban and suburban areas. Perhaps a friend has a farm or isolated tract. Or maybe your neighbors are just curious about what goes through their yard at night and will let you set up there.

Photography is usually allowed on public lands. However even in parks and wildlife management areas, you need permission from the rangers or operators. After informing them of your desire to set up a camera, check on any restrictions and regulations, and request their permission.

Going camping? After settling into your tent, RV or cabin, take a walk around the area and look for signs of wildlife activity. If you spot a likely location, go back and get your camera as well as permission to use it on the grounds. In most cases the stewards or rangers of these tracts might be just as curious as you are to see what wildlife passes through unseen.

One motorcyclist friend of mine takes a trail camera along with him on trips. At the beginning of the ride he locates a potentially good spot for wildlife activityÐmaybe a roadside trail, a pond or fieldÐthen sets up his camera and takes off to enjoy a day on the road. On his way home he stops, collects his camera, and takes it home to see "what he caught" that day. 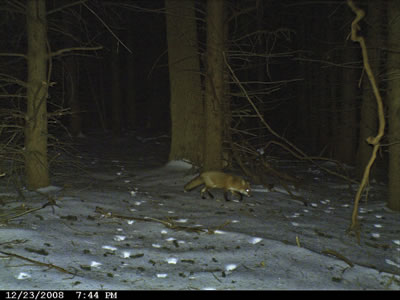 Dozens of fox photos have shown how they wander back and forth, noses down, either following a scent or trying to find one.

For school or scout science projects, these cameras make it easy to survey and monitor wildlife activity within a given area. The photos contain enough information, such as date and time created, to enable a science class to do a detailed study of animal patterns, even if it's right on school property!

Make sure that your camera set-up does not infringe other peoples' privacy. Also, be aware that the sudden harsh light given off by a standard flash may cause a severe start or even temporary blindness, making you responsible for any ensuing problems. Never set up a game camera along a road where the flash will momentarily blind drivers!

Raccoons washing morsels in a small plastic pond were a frequent scene in warmer weather, but they became scarce as the cold chill of winter approached.

Stay away from environmentally sensitive areas, especially breeding grounds, nesting areas, or other refuge areas where your presence might disturb the delicate periods of the wildlife's living cycle. Stay on or very close to existing trails and respect federal, state, and municipal laws, restrictions and requirements on the tract you want to use.

Remember, your camera is at risk. No security measure will deter someone who really wants to steal it. Having accepted that point, the amount of effort spent in securing the camera will depend on where it is being set up. The two most widely used measures are to camoflage the camera and to lock it in position.

If the area has frequent passersby, the camera might be mounted on a tree in such a manner that the tree itself will shield the camera from view of anyone walking past it. Camoflage duct tape and camo perf cloth also work well at helping to hide the camera. Regardless of how safe a location may appear to be, some sort of lockable setup should always be used. You can use a small lock and camoflaged dog chain to secure the camera.

Be warned, these cameras can be addicting! I began exploring this new version of an old hobby with one game camera but soon wanted to monitor other likely areas at a local wildlife preserve. Soon, a third and then a fourth camera were also "needed". Aside from the initial monetary cost, you need lots of time to monitor and maintain your string of trail cams. But a rare peek into the secret world of wildlife makes the price worth paying. Despite their relatively small area of coverage roughly 1500 sq. ft. these four cameras have captured more than 1800 motion-triggered images in just a few months, most of them at night.

Please leave comments or questions below or email the author directly.

This story was first published: Spring, 2009