Season of the Mystic 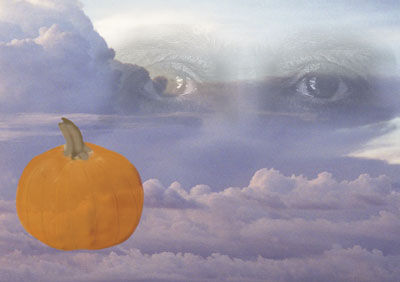 Jane Doherty swallows ghosts. In the course of a séance she will take on the kind of spirits that should be chewed up and spat out. That treatment would be counterproductive, since the ghosts could remain to torment the living. So rather than spitting, she exhales and wafts them along to the Other Side.

Ms. Doherty describes this quite matter-of-factly, as if unaware that a logical response is a very, very, very long silence. Images of Linus waiting for the Great Pumpkin come to mind. Jane continues to talk, apparently unconcerned by a listener's disbelief. Perhaps it is just the time of year, the season of haunts and chills at the back of the neck, when the trees resemble skeletons and children are happy to morph into ghosts, goblins and little green men, but as Jane talks a listener feels a little bit less like Lucy and a little bit more like Linus.

Author of Awakening The Mystic Gift, Jane considers herself a true psychic. The real thing. The medium who taps into the paranormal. Her development began twenty years ago, innocuously enough, with a reading in a mall. "I was told I had a gift," she recalls. "And that I would be on TV. Another psychic said the same thing. I kept going to readings. One hundred fifty readings were the same."

Ample fodder for the occult exists in northern New Jersey. With a certain mindset, the ethereal becomes real. Some insist that the tortured souls of Indians, slaves, Revolutionary War soldiers have hunkered down in the highlands. "It's one of the most haunted areas of the state," Jane says. "New Jersey is one of the original thirteen colonies. The trauma of all that history makes it ripe for more hauntings. Especially the northern corner."

Paranormal activity has been attributed to places like 217 South Street in Morristown, where Antoine Le Blanc, the hired help, used a shovel and an axe to murder Judge and Mrs. Samuel Sayre and their servant girl Phoebe in 1833. Captured in Newark, Le Blanc would hang in Morristown. A local tannery created truly gross mementos ­ wallets, purses and book covers ­ from Le Blanc's skin. That rough justice, apparently, proved inadequate for Phoebe's ghost. Chilled rooms, images in mirrors, exploding punch bowls have been attributed to her spirit. Claims of odd activities persist, despite purported "cleansings" of the house.

Jane laughs. "Drugs and alcohol provide a common thread for possessions. People who drink and take drugs have a broken aura. They can be possessed. When I mention that in a séance, someone always blinks."

At least drunks enjoy one protection; booze can dull the emotions. "Ghosts aren't threatening unless you show emotion. Emotions are very powerful and generate energy. The more emotions you show, the more activity is triggered."

Emotions arise in both spheres. At a farm in Browns Mills, New Jersey, a murderous male spirit tormented the spirit of his female victim. Terrified, the female ghost attached herself to a woman in the house. "It was a partial possession," Jane says. "It made the woman sick. She had symptoms that resembled Lupus. I had to release the male spirit. Once he was released, the female spirit could be released as well."

For The Learning Channel, Jane visited a home in Asbury, whose oldest rooms date back to the colonial era. The owners, a policeman and his wife, would hear footsteps in the middle of the night several times a week. The little girl saw a witch in the fireplace. The wife encountered spirits ­ clothed, but transparent ­ who huddled in the kitchen where early congregants had started a Methodist Church in the 1700s. The last time she entered the room late at night, the wife heard a voice say "here she comes."

Jane believes the footsteps belonged to a Revolutionary War soldier, who'd built that part of the house in the 1800s. She feels the policeman, as someone who donned a uniform, triggered the activity. The skeptic, a relative of the family, mocked the process. According to Jane, that changed when he slept in the kitchen, then woke early and moved upstairs. The skeptic heard footsteps that could not be accounted for.

Using séances, Jane tried to resolve the turmoil in the homes. "I can't say more until the program airs," she says, "but a spirit loved one of the skeptic came through and let him know some very specific health issues would be OK."

Jane describes her work with supreme confidence. "This is not something I would choose as a profession," she adds. "God chose it for me. I have total trust and faith in God."

How seriously do people take this other spirit world, this world of demons, haunts, and possession? The Catholic Church allows provisions for prayer, psychologists and a diocesan exorcist. But that belief in demonic possession goes hand in hand with modern psychiatry. Few people seeking an exorcism are possessed; most need ordinary help. Counsel. A prayer. A soothing contact.

Exorcisms rid the body of an invasion, the truly terrifying from another world. Seances extend an invitation, allowing the living and the dead to bridge the gap, to share messages, one side to the other. Grieving people receive help and guidance.

Séances are not for the skeptical. Yoga West's promotion piece puts it, reasonably enough, as "a meeting of open-minded individuals at which a medium tries to communicate with the Spirit of someone departed. The energy of the group acts as the power pack by supplying the extra power needed by a Spirit to make contact with this world. The main function of the medium is to act as a link of communication between the two worlds." The positive attitude of the group also aids in the success of a séance.

For most, a positive attitude also equates with a willing suspension of disbelief. If many doubt the existence of spirits, few doubt the existence of frauds. Unstructured, impossible to regulate, the business of spiritual mediums attracts snake oil salesmen. Clients must sort the wheat from the chaff. A web-site search for mediums produces a dizzying array of claims: licensing, degrees, unverifiable testimonials.

About a clairvoyant's claim to be licensed, Jane cautions, "that's a warning sign. Licensing requires recognition of this as a profession, which hasn't happened." She runs through a list of evasions and claims that should raise eyebrows. "Anyone who won't provide their real name deserves a long look. Anyone who says they can work through email, or channel over the Internet should be questioned. Phone, yes, you can pick up vibes, clues to past lives. Anyone who won't provide references or details should be approached with skepticism."

As for fees, Jane adds: "Paying by time is a gypsy psychic ploy, where a crystal ball reading costs one amount, or fifteen minutes costs another amount. All this leads to finding a dark aura, which will cost more money to remove. A reading should be a reading."

In fact, an encounter with a psychic in north Jersey sounds problematic from the beginning. The psychic won't give his real name or referrals, although he does claim to be working on a string of unsolved murders. "Young women were strangled. In New York State." The gentleman looks me in the eyes and says "I can't say more. People have a way of disappearing. I have to think of my wife and children." Indeed. A disappearance is in order.

The next call goes out to a pet communicator. She does not provide her real name either, but she provides a glowing testimonial. We arrange a pet consultation over the phone. The woman taps into my horse's soul while we talk on the phone. The animal in question refers to me as "mommy". He does not want to do complicated lateral movements, since he is afraid "mommy" will fall off and he cares about her. He saw another horse curtsy and wants to learn to do the same.

Sadly, in the real world, this animal can and does spin, buck and walk on his hind legs in complete disregard for his human companion. The racehorses-in-training don't curtsy at this farm; they cavort, bolt, leap and otherwise delight in their blazing young strength. An hour later, little has developed that resembles the known world. The horse is a horse. Pumpkins can't fly.

"I have an issue with this work over the phone," Jane says. "The person really needs to be with the pet."

That might explain the glowing testimonial; the pet communicator visited the farm and walked from horse to horse. Weeks later, it is almost possible to hear her client still shaking her head in wonder.

Jane Doherty believes in this other world, the world that some children try to inhabit, like Linus waiting for a great transformation in the pumpkin patch. Her next stop will be a haunted horse farm in Stockton. Ironically enough, she is less concerned with the haunts than with a growing worry that she will have to sleep in the barn. Ghosts can be dealt with. Mice and rats are another issue. They are the unknown, the critters that send chills down her spine.