"The music scene in this part of Jersey was hopping with Southern rock. There was the 'Showplace," a rock and roll place in Dover. You could stretch your strings and blast in there. All the bands came to play there. There was a tremendous amount of music between 1970 and 77. A lot of bands came up and stopped here and played before they went on to New York. My brother opened for Talking Heads with his band 'TV Toy.' We met so many people from so many great bands. Blackfoot packed that place. Roy Buchanan played a Barth-Benedetto guitar and he told me, 'You should be the one to go out and play this and make it famous.' What a compliment. I couldn't get my head out the door." ­Tom Barth, long-time area musician and guitar maker.

Once upon a time in the 18th century, a hotel was built on the banks of the Morris Canal. Canal boats stopped there, and stage coaches too, bringing travelers to rest and merriment for an evening. Two centuries later, the old hotel was bought by a family who turned it into a music hall. It still made people merry.

The Wrobleski family brought in blues and bluegrass bands. Many were the cream of Chicago's bluesmen, among them Muddy Waters and John Lee Hooker. "They did Sam and Dave. They did acts that really went into the famous. That's how The Stanhope House made its name. It started in the '70s," says Maureen Myers, who now owns the club.

The Wrobleskis booked unknown bands too, like Stevie Ray Vaughan who played to a Stanhope House audience of 20 before he got known. Mama Wrobleski cooked great food. People raved. In the '80s, the Serriccias bought the hotel and featured blues and zydeco. Then one day in 1993, Myers saw the building and fell in love. She bought it the very next day. The House features folk, blues, zydeco and also original music, which Myers greatly supports.

Some musicians who performed there in the '70s still do ­ Billie Hector, Eddie Shau and the Wolf Gang (once with Howling Wolf). Jack Tannehill has been there since the '80s and opened for the likes of Savoy Brown, John Hammond and Dr. John. "John Hammond and I actually had an argument out in the parking lot" he says.

Tannehill came to the old hotel before he ever started writing songs. "This was my dream. It's my favorite stage. I've seen so many of my heroes here. The building still looks like it did when I was a kid." A favorite memory is the night he came into The House from out of a rainstorm. Stevie Ray Vaughan and Double Trouble were on stage. "I was blown away. I thought 'who is this guy?' Three months later he was everywhere."

Memories of the area's symphonic and rocking music venues abound. Greg Gaertner, executive director of Waterloo Village National Historic site, remembers the pop concerts there from the early '80s when he was just 16. He went to bluegrass fests and saw Harry Chapin. "It was a perfect performance."

But the music really started earlier in 1967 when founder Percy Leach started classical concerts. The first one opened with cellist Pablo Casals. Country music shared the fields and tents in the '70s with weekend jazz fests and a 12-year run of bluegrass festivals. The mid '80s brought pop and the venue joined forces with the big promoters. A classical music series ran for six weeks every summer. They gave out scholarships to college students to learn from great musical masters until '98 when the money ran out.

Rob Ortiz of Create-A-Vibe says it was a real privilege to produce their first show there last year. It's a big deal to his crew to step up on that legendary stage. "We all made sure we saved our poster from the show last year, and I'm sure we'll do the same for this year."

The events are to raise awareness of the village. "The original theory of Mr. Leach was to bring history to life with music," says Gaertner. "Just about anyone you can mention has played here at one time. We're a country venue. We're under the stars."

Not so with all Northwest Jersey's music halls of fame. The Community Theatre of Morristown was built in 1937 as a black and white movie theater. It was a destination theater where men wore jackets and ties and ushers wore uniforms. "Practically everybody around here had their first date and first kiss here," said George Brennan, director of development. Its first live performances in the late '70s were short-lived due to short sight and the building was sold, according to Brennan.

The Kirov Orchestra performed in 1994 and ever since then the place has staged top bands and unknowns. Try Joan Jett and the Black Hearts and The Pretenders. "They're a couple personal favorites," says Brennan. The theater rounds out a band's tour as it heads to New York. "Our venue is just big enough to make it worth their while. Bigger names pay some of the bills and that allows us to do programs that are not so commercially known." Like the 16-man Russian chorus who sings religious music. The Community Theatre believes in giving people a cultural experience they can't get anywhere else. 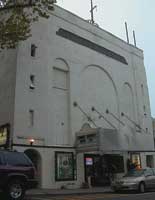 Create-A-Vibe produces shows at the old Darress Theater in Boonton also. Built as a vaudeville theater in 1907, it was a music venue from the start. Later, in the 20s, it shared the stage with the picture shows until '33 when the last known vaudeville performer took her final bow. The Darress is known for its gangplank entrance that once dropped down onto Main Street to give easy access to sets, people and animals entering the theater.

Under the guidance of new owner Tom Timbrook, the 700-seat movie house became home to rock concerts and operas in '82, and has since evolved to musicals, comedy and rock bands.

The Baker Ballroom in Dover is one of the best-sounding places Ortiz ever did a show at, but he says it's hard to get people to come to a show there. It too, is an old vaudeville theater and opera house. "It's an old landmark and you can see the potential of this place helping out the town, he says. "It reminds me of the legendary Warfield Theater in San Fransisco. The layout, sight lines and sound are perfect." The theater is set up so anyone in the 1300-seat room can hear a person talk on-stage.

As a kid, Rich Rossi came to see movies there. He bought the building in '80, did a few concerts, lost money. The theater closed in '82, then reopened five years ago and is barely surviving. He gets no support from the locals in the town government or the county freeholders, he says. At the same time they want the fine arts programs and ballet that the local community could never support.

"We're not getting a penny from anybody. All we want is to be able to get the tools we need so we can have the events we need," he says, like a kitchen and liquor license. "We're trying to bring life back to the town of Dover."

The living was easy for the band Blackfoot, who lived in Tut's Huts fishing cabins near Hackettstown in the '70s. They were a Florida band who came north after getting a letter from a girl that said, "Yeah, we love you. Come on up and we'll make you a star." So they packed up and moved to New York City, then later out to Mt. Freedom. "The club scene was happening. We were one of four favorites in that part of Jersey. There were a handful of us that got the better jobs. It was a happening. It was rock and roll and we were a Southern band. We knew everybody and played on softball teams on Sundays," says Greg T. Walker, Blackfoot bassist.

He hunted a lot in Jersey, rode his Morgan in the hills and fished in the Musconetcong River. "I've always loved the western part of Jersey. It was wonderful and we couldn't have been in a better place at that time." For a while, band members began to float between Blackfoot and Lynyrd Skynyrd and they eventually headed south. Walker says he's tired of Southern rock and just plays rock and roll and is now one of the NDN duo.

Myers says Jersey has great bands in all genres. She's in it because she loves it. "Sometimes I get someone to watch the door for me and I'll come and watch who's on stage. They're just beyond talented."

This story was first published: Summer, 2003