It's been fifty-six short years since the original 28 members of Morristown's Masterwork Chorus began bringing praiseworthy performances of classic choral works to audiences in New Jersey and the New York metropolitan area. Members of the all-volunteer amateur chorus come from over fifty local communities, representing a diversity of cultural backgrounds. Supported by the professional Masterwork Orchestra and renowned soloists, nearly all of the chorus' performances have been in the original language with full orchestration. 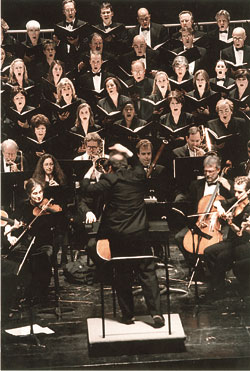 Newark's Symphony Hall was, in 1955, the stage for Masterwork's first performance, Beethoven's Symphony No. 9, accompanied by the New Jersey Symphony. Following years saw the group's repertoire and reputation broaden. In 1959 Eugene Ormandy, one of music's most famous conductors, engaged The Masterwork Chorus to appear under his direction with the Philadelphia Orchestra in a performance of Beethoven's Choral Fantasy. And in 1960 the ensemble debuted at Carnegie Hall with a rendering of Bach's Christmas Oratorio. Masterwork has also appeared at the Garden State Arts Center, paper Mill Playhouse, at the Kennedy Center in Washington, D.C and in many other locations in New Jersey and New York. It was in 1957 that the Chorus first performed the work for which it has since become so well known, George Frederic Handel's Messiah.

Messiah, one of the most renowned pieces of English sacred music, is easily the German composer's most highly esteemed and popular work, although it was written near the end of his career after he had suffered partial paralysis from a stroke. Composed in only about three weeks during 1741 while Handel resided in London, the oratorio was first performed in Dublin the following year. Oratorios were originally designed to tell stories from the Bible, which were too expensive for most people to afford. The three parts of Messiah represent Christ's birth, death, and resurrection; each part made up of a series of arias and choruses, with a Biblical passage as their basis. Handel's blend of graceful, buoyant melodies for the solo virtuosos with majestic ceremony for the chorus, which by the mid 1800s English called for over 3,000 voices, has enthralled audiences, and challenged performers, for over 250 years. And for well over 200 performances, the 125 voices of the Masterworks Chorus have thrilled listeners with Handel's magnificent climax, the Hallelujah Chorus, as the crescendo of words and music rises higher and higher, proclaiming glory to God and to His own son, the Messiah!

Masterwork is by no means limited to Handel's Baroque period and has performed works by Bach, Brahms, Bloch, Faure, Mozart, Haydn, Kodaly, Honegger, Mendelssohn and Britten. Dr. Andrew Megill, who began his musical stewardship of the Chorus and Orchestra in January 2000, is recognized as one of the leading young choral conductors in America, known for his passionate artistry and unusually wide-ranging repertoire, extending from Renaissance works to newly-commissioned pieces. 2009 is his tenth year with the ensemble.

This story was first published: Winter, 2004