In 1966, a coffeehouse called The Thirsty Ear opened on Williams Street in Morristown. The brainchild of Granville Miller, the “Ear” was a youth outreach program by the Presbyterian Church, and the name was a take-off on a popular California coffeehouse called The Hungry I. In those days, coffeehouses were gathering places, where things happened: music, poetry, conversation, and discussion. The popular version of “folk” music was all over the radio, with Peter, Paul and Mary, Joan Baez, the Kingston Trio, and Harry Belafonte singing the hit songs of the day. “Hootenanny” was on TV, and even Barbra Streisand was a folkie. The only folk music event in the immediate area was the annual Tricorn Hootenanny held at Morristown High School for some ten years. The Thirsty Ear became a nightly gathering place for aspiring musicians, fans and local performers. Performing groups formed, flowered briefly, and faded. New groups, like Frostwater, St. Elmo’s Fire and The Blue Sparks from Hell formed, and a few, notably Blue Sparks, lasted through a generation. After a time, the organizers tired, and The Thirsty Ear closed, but the community of young performers and friends remained. They worked together to open new music venues around the Morristown area. Friendships developed, and a small music community became a small music organization. Forty years later, that group has evolved into The Folk Project; New Jersey’s premiere acoustic music and dance organization. The Folk Project today boasts over 600 members, and produces more than 120 music and dance events each year. 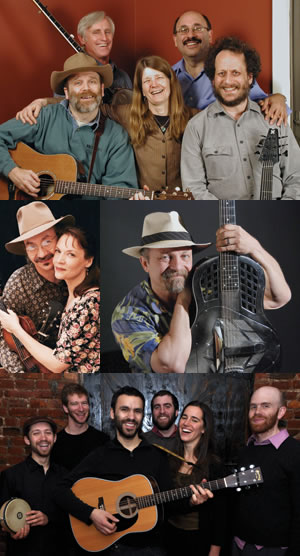 Some of the musicians within the complete spectrum of performance at the Folk Project include Music Town, made up of FP members; the nationally known Jay Ungar and Molly Mason; blues player, Toby Walker; and Ilusha Tsinadze, all the way from Georgia (in Russia).

Still loosely centered around Morris County, but with activities and events throughout northern New Jersey, the Folk Project has developed as an all-volunteer, not-for-profit music-centered organization. The members work together to plan, organize, implement and staff every event. Individuals give freely and frequently of their evenings and weekends. Many have been doing it for years. It’s a labor of love. They believe in the music and delight in bringing positive musical experiences to the general public, as well as to each other. This shared purpose and the years of working and playing together has fostered a strong sense of friendship and community. And it’s worth noting that in the present financial climate, when many arts organizations are struggling to survive, the Folk Project, without a physical office or paid staff, continues to flourish.

The Folk Project’s formal purpose is to “provide nonprofit, cultural activities in the fields of music and the folk arts to the general public and to the members of the organization.” Organized in 1976 as a 501(c) non-profit corporation, the Folk Project works to offer opportunities to showcase every level of talent and provides a buffet of ways for musicians to be together. Members open their homes for music workshops and house concerts several times a year. On the second and fourth Saturdays of each month, Evenings of Music—mixtures of pickin’ party and potluck—are held. Folk Project musicians volunteer to play at various community events, like the New Jersey Audubon Society’s May Day celebration and the Wayne, NJ, Wayne Day, throughout the year. For the community and the general public, many events are offered. There are scheduled festivals at a camp in the Ramapo Mountains every Spring and Fall, with nationally known performers, as well as workshops, dances and many opportunities for jamming. There is a weekly concert series (The Minstrel), a twice-monthly dance series (Swingin’ Tern) and even a cable TV program series (Horses Sing None of It). And, for community groups or individuals, the Folk Project maintains an extensive performers’ listing. A visit to the Folk Project website, and an email to Community Services Chairman Pat Brangs, brings performers and clients together.

The Minstrel Coffeehouse dropped the “coffeehouse” label several years ago. As President Ed Roffman says, “We don’t call it a coffeehouse anymore. People were confusing us with Starbucks.” But 48 times a year, on Friday nights, The Minstrel Acoustic Music Series opens its doors at the Morristown Unitarian Fellowship in Morristown. The performance space comfortably seats 200, and is housed in the neo-Georgian Thorne Oaks mansion, designed in 1912 by the renowned architects Aldrich and Delano and listed in the New Jersey and National Register of Historic Places. Although the group is deeply rooted in traditional and contemporary folk music, Chairman Mike Agranoff offers a wide variety of national and international performers. Jazz icon and guitarist Bucky Pizzarelli has graced the stage, as well as his son John. The 18-piece big band, Reeds, Rhythm and All That Brass, has appeared. Jug bands, bluegrass groups, singer-songwriters of every description, hot fiddle players, and very traditional ballad singers, all fit nicely into the category of Acoustic Music. The stage also becomes a place to spotlight Folk Project performers. Several times a year, special celebrations happen. Most notable are the annual Valentine’s Day party, where members offer both sentiment and sarcasm, all laced with good humor, and the annual Birthday Party, a celebration concert held the last Friday in July for 36 years. 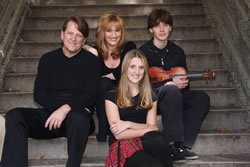 Since 2004, the career of Dugan’s Hooligans has been inextricably intertwined with the Folk Project. But this family band from Madison has played their last FP show. The two offspring, Connor and Sharly, having grown from precocious children to accomplished virtuosi, are off to music schools in preparation for careers of their own.

The second Friday of each month is reserved for the Open Stage, the longest-running event of its kind in New Jersey. This is an opportunity for all acoustic musicians, regardless of age or experience level to perform a 15-minute set onstage, and for the audience to be treated to a diverse collection of acoustic musicians. A typical evening will include someone going before an audience for the first time, a seasoned professional trying out new material, or a hopeful performer looking for a concert booking. All are welcomed with respect and enthusiasm. Many performers return regularly. The atmosphere is of a family gathering, and host Scooter Ferguson has built a positive atmosphere around the Open Stage.

Swingin’ Tern Dances is contra and square dancing with a live caller and a live band. The music happens every first and third Saturday at the First Presbyterian Church in East Hanover. Both Contra and Square dances use the same figures (swing, promenade, do-si-do) and are easy to learn. By convention, dancers dance with a different partner for each dance. This means you don’t have to bring a partner to have a good time, and in the course of the evening you meet new friends. Beginners have a chance to dance with experienced dancers, and learning is easy. There is a workshop for beginners before each dance. There is always a live band and a caller. In addition to the contras and squares, waltzes, polkas, and other couple dances enhance the evening. As well as the regular dances, Swingin’ Tern holds several special events during the year. The Harvest Hoot, held each Fall, mixes Swing and Contras. The annual New Year’s Eve Dance is a very special, high-energy, alcohol-free holiday celebration. And Tern Swings! Brings the big band Reeds, Rhythm and All That Brass to East Hanover for a night of jitterbug and jive!

A continuous jam, a week-end long music party, a tapestry of concerts, workshops, dances and more—those are the Folk Project Festivals, held each Spring and Fall in the Ramapo Mountains near Bloomingdale. Unlike other festivals with large crowds, ticket lines, concession stands and vendors, the Folk Project Festival is a gathering limited to about 200 people, by pre-registration only, and the emphasis is on the folk community. It’s a combination of family reunion, weekend retreat, and concert series. All programs are indoors and weather proof. The performers are a mix of seasoned veterans, like Christine Lavin and guitarist John Carlini, to up-and-coming national acts, like the trio Gathering Time, to featured members of the Project. Over thirty different workshops are scheduled during the weekend, offering instrumental and vocal instruction, kid’s activities, dances, crafts, and more. But the main activity is the music that begins when the first person arrives and takes out an instrument early on a Friday afternoon, and ends late Sunday afternoon as the last few celebrants pack up and leave, with a “see you next time” and a wave. The Fall Festival this year will be held September 30 through October 2.

Ralph Litwin is the producer and host of Horses Sing None of It, a non-commercial half-hour cable television series featuring a surprising array of contemporary and traditional performers. Using the facilities of the Morris County Community College, Ralph schedules performers when they are traveling through the area, engaging them in performance and conversation. An award-winning banjo player (twice NJ Old Style Banjo Champion) and harmonica player (1996 Uncle Dave Macon Days) himself, Ralph brings both perspective and charm to the program. Horses Sing None of It is broadcast on Brooklyn Cable Access TV; Manhattan Neighborhood Network; Service Electric Cable TV, Allentown, PA; Fargo ND Community Access 99; Morris Cablevision; Comcast Northwestern NJ and Central NJ, and streams via www.bricartsmedia.org. Where does the name come from? The story is that Big Bill Bronzy was once asked if he considered his blues to be folk music. He replied: “Must be. I never heard no horses sing none of it.”

The Folk Project maintains an activewebsite, where you can find performance venue schedules, information on any Folk Project activity. Also on the website are email contacts, phone numbers for specific activities, and opportunities to purchase tickets or download registration forms.

Jim King found the Folk Project in the late 70’s, and has been singing and reading poetry (his own) at various FP gatherings and functions for many years. He was a trustee of the FP for thirty years and President a couple of times.

This story was first published: Autumn, 2011