In the Ramapo Mountains of Ringwood lies one of New Jersey’s most exquisite gems, the New Jersey State Botanical Garden (NJGB). Its ninety-six cultivated acres are a secret to many — for others, a joyous discovery waiting to happen. On a recent walk with NJBG volunteer guide and retired history teacher, Jim McMullen, the garden was glorious, even in early spring. Century-old massive trees demanded attention. Leafless, their branches rose and reached like mighty arms, and I couldn’t help feeling their strength. No flowers and leaves to distract, the trees were the stars on a scenic stage designed a hundred years ago. Together—landscape, trees, ornaments, manor house and McMullen’s expertise—were a magic mix.

Long ago in the 1800s, small farms covered this land. Francis Stetson, a New York lawyer, bought them up and established Skylands Farm. Stetson hired landscape architect and founder of the American Society of Landscape Architects, Samuel Parsons, to design gardens and infrastructure. A hundred years later, investment banker, Clarence Lewis, bought the farm and hired esteemed landscape architects of the firm Vitale and Geiffert to redesign the property; and architect John Russell Pope to design a new manor made of native granite, the present Tudor-style Skylands Manor. Lewis found a new passion as plant aficionado and for decades collected exotic plants from afar as well as local wild roadside plants, resulting in an almost encyclopedic assemblage of flora. In the 1950s, he sold the estate to a Christian college, and in 1966, New Jersey bought 1,117 acres of the land. In 1984, ninety-six acres were designated as the official New Jersey State Botanical Garden, part of Ringwood State Park. A few years later, Skylands Manor was listed on both the New Jersey and National Registers of Historic Places.

At the corner of Maple Avenue, lined with red oak, the state tree, we enter the Winter Garden, designed to offer a north view of greenery from Skylands Manor in winter. Some trees were chosen for distinctive attributes like the shiny, sun-struck bark of European beech that reflects the winter moonlight, and a weeping beech with its dried foliage resembling golden coins. Designed with function as well as aesthetic in mind, conifers block the wind. Around the west side of the manor house, a not-to-be-missed basswood tree blooms in spring, its fragrance sweet in the air. A ginkgo stands nearby with bark that is rough and tough like armor. McMullen says, “Its ancestors are seventy million years old and predate the dinosaurs. They survived the bombing of Hiroshima.” Fairy tales have it that Robin Hood and his merry men hid behind strong English oak trees in Sherwood Forest, just like the one near the manor. This area was created as the west view from the house as it looks out toward a reservoir and the Ramapo Mountains.

Four all-season views from the house lead to gardens: the north Winter Garden, the West Lawn that leads to a view of the Ramapo Mountains, the south Terrace Gardens, and east Annual Garden that leads to the statue of Diana, Goddess of the Hunt.

Around back, the view to the south is of the historic Italianate Gardens, five terraces in a row. First the Octagonal Garden, which mimics the manor’s eight-sided breakfast room, leads down to the Magnolia Walk showcasing a Beaux Arts mirror image of thirty sweetbay magnolia with a delicious scent that will take you to Fairytale Land in June. Don’t miss it. It is a sensory garden in spring when the delicious scent of basswood blossoms filter groundward like perfume, and the sweetness of magnolia sifts through the air. This walk down the stepped gardens will take you to Dreamsville where antique terraces with fountains and cherubs and previously-unimagined beauties await. Step down to the Azalea Garden where spring-blooming rhododendrons, azaleas and daffodils flank a reflecting pool covered in water lilies in summer. Later, day lilies and annuals fill the Summer Garden terrace followed by the Tree Peony Terrace with flowering shrubs and peonies. To the left is the Lilac Garden with thirteen beds planted in the 1920s by Lewis. Over one hundred varieties and two hundred plants of lilacs begin flowering in late April. The best time to see them is around Mothers Day. Did you know that lilacs are in the olive family? If you want to learn how to grow and prune lilacs, become a NJBG Lilac Restoration Project Volunteer!

Back across Maple Avenue, step down to the Perennial Garden border where an explosion of color and fragrance stretches from spring through autumn. Stroll the aisle between two rows of a profusion of hardy perennials of all sizes, textures, colors and forms. Applause for the volunteers who maintain this labor-intensive, cottage-like garden! Trellises and arbors of roses, clematis, and silver fleece vine, and select flowering shrubs add more dimension to the experience. Slip on through to the other side to the Annual Garden, a formal layout with bedding flowers that change with the seasons and years. A sixteenth-century marble wellhead of cherubs and lions sits center stage filled with blossoms. It is part of the east vista from the manor to Diana, Goddess of the Hunt. Just outside the annuals, check out the Hummingbird and Butterfly Gardens. 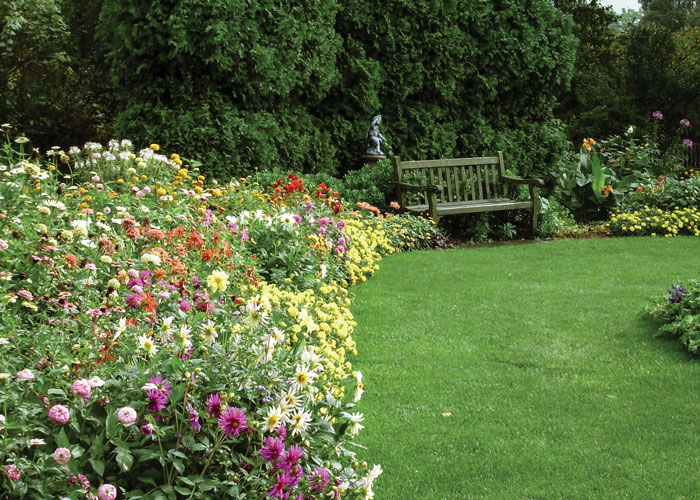 The displays in the Annual Garden change not only through the seasons, but also from year to year. 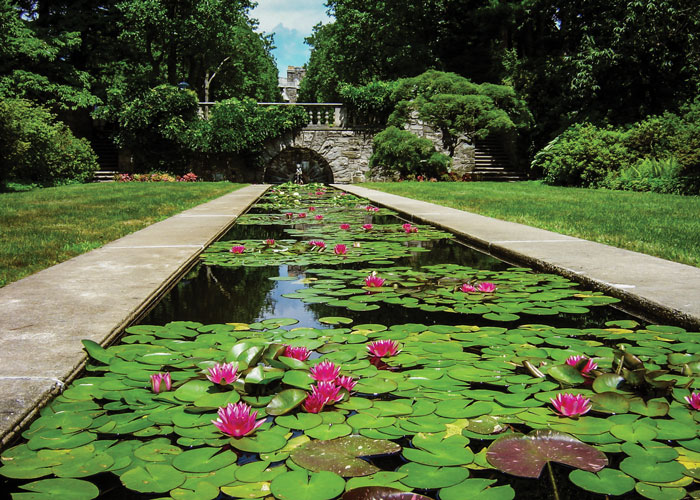 Water lilies cover a reflecting pool at the Azalea Garden. 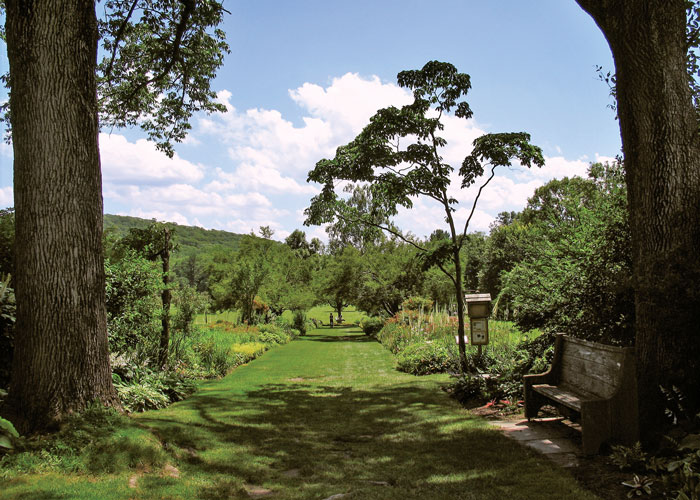 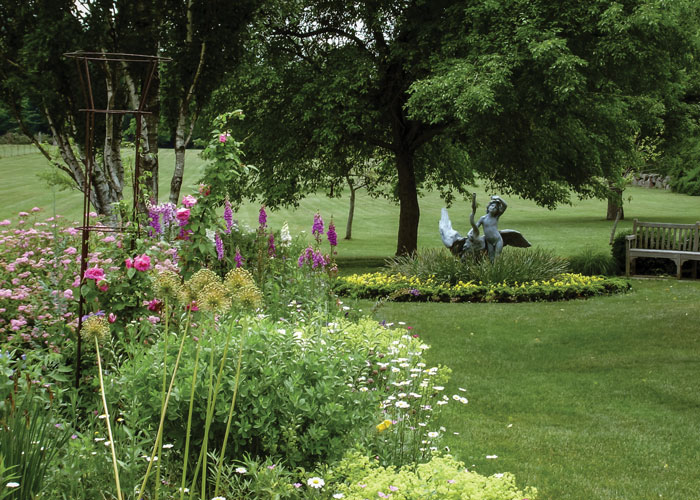 The Perennial border is an explosion of color 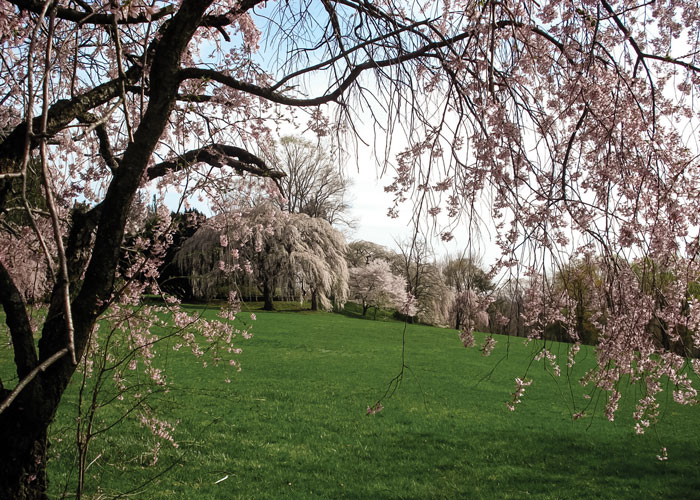 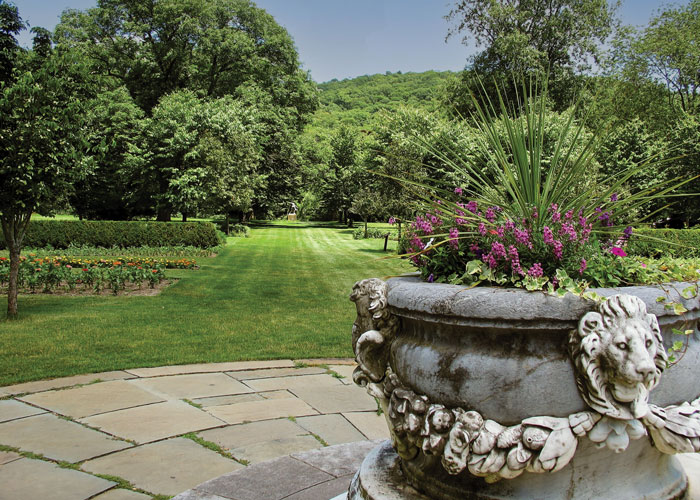 Head for Diana through pink cherry trees on a straight axis from the manor and wellhead to the Crab Apple Allee in early May for a half-mile of spectacular pink flowering trees. In the Great Lawn next to it, the scale model Solar System Walk has signs of planets and a game. Be sure to first pick up a brochure in the Carriage House. The Crab Apple Allee separates formal from informal gardens such as the Hosta and Rhododendron Gardens, and the Moraine Garden, one of this writer’s favorites. Built on a deposit of rocks left by the glaciers ten thousand years ago, it was created by Lewis with Alpine plants. Today it mimics those plants that grew after the glacier receded. Continue into woodland and the Wildflower Garden along a trail to the Bog Garden with frogs, bright Japanese primroses, native flame azaleas, wild spirea, Jack-in-the-pulpit and other wildflowers. Note the bald cypress with its knees sticking out above the soil. Legend has it that Lewis planted some Pine Barren look-alikes. Can you find them? See it in May.

New Jersey Botanical Garden is a place of peace, inspiration, education and wonder. Indulge yourself and visit NJBG every month. Take a Sunday afternoon walk with Jim McMullen. Dig in and share the passion!

NJBG is open daily with free guided tours on Sundays and a schedule of special tours and events. The gardens are located at 2 Morris Rd in Ringwood. For more information call (973) 962-9534 or visit the website.

One day you are likely to find yourself headed to New Jersey's northernmost corner in search of adventure.

Wilbur's is the perfect destination on a drive through the New Jersey countryside. British foods and candy, Yankee candles, wind chimes, pet-themed gifts, preserves, much more. Charming location in barn complex between Newton and Blairstown.

This story was first published: Spring, 2022