Profile and photos by Mary Jasch

Walking through Wayne Card’s property is a privileged experience—like a ride in a spaceship to Planet Card. Fun, adventurous, and definitely unique, the man delights in making art, whether structural, commemorative or functional, sometimes unknown even to him, but always flamboyant. 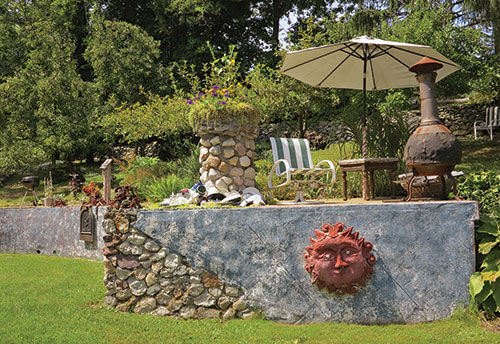 His land is a sculpture garden, a voyage across America and beyond, the workings of a man in constant motion. Pieces are in progress, and Card enjoys that process. A self-proclaimed dumpster diver, he collects materials and ideas from travel and friends. He buys from Ebay, antique, junk and flower shops. “I collect a lot of stuff,” says Card, outsider artist of Wantage, New Jersey, of the black fringed leather scraps from South Dakota displayed in his workshop. “If something is wasteful to others, it’s useful to me. I can always find something artistic to do with it.” 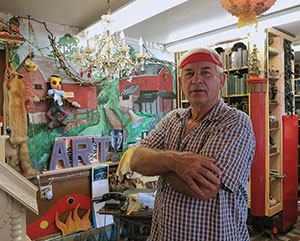 For 38 years Card was a lineman for Jersey Central Power & Light and along the way saved the landfills from a zillion used-up utility poles. He split and stacked them like cordwood to become a pole wall as canvas for concrete Santa faces and as foundation for a patio—his backyard winter getaway where he sips wine by the chiminea fire.

Treasured barn and church doors are siding for out-buildings.

Card grows bamboo for material and stacks it like a teepee against a dying blue spruce, which has since miraculously recovered. He says someday he’ll slap a bit of red “woops!” paint (paint that box stores make as mistakes and sell cheap) on some, stand back and say, “Well, look at that!” He’s got bamboo from Grand Rapids, a kudu skull from Buffalo, buckets of rock from Lake Michigan, clam shells from Maine and coral from Florida. He made his own Potsdam Wall after seeing one in Germany. 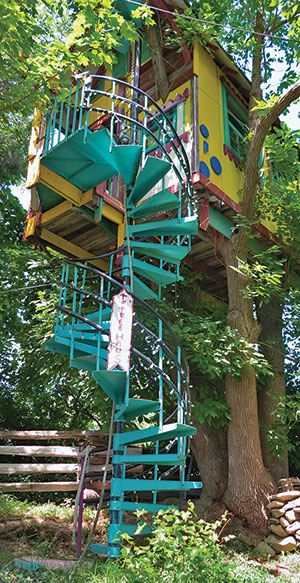 Despite his levity and childlike curiosity, Card is quite serious about his work. He’s made a tree house with a circular blue staircase for his granddaughter, a tile mosaic with his niece, a stone wall with an imbedded rowboat as memorial to old men on boats and those on land who made the stone walls that stretch across northwestern New Jersey, a sculptural tribute to Rutgers scientists in Beemerville, a Sanctuary tribute to Nature that “separates the busy life from the slower life” and a workshop like no other. He built a house for him and his wife Lorraine and their caskets. How does that feel? “Independent. I hate to see people being taken advantage of in their worst moments.”

For Card, neither rain nor sleet stops him from building his fantasies. Sometimes in winter he builds and sells one-of-a-kind designer birdhouses and garden gates. When people ask what kinds of birds like the houses he says, “My houses are made more for people. If the birds want to use them, then that’s okay.” Wayne Card is one of those people you need to meet in your lifetime. Contact him or check his website.