Profile and photos by Mary Jasch 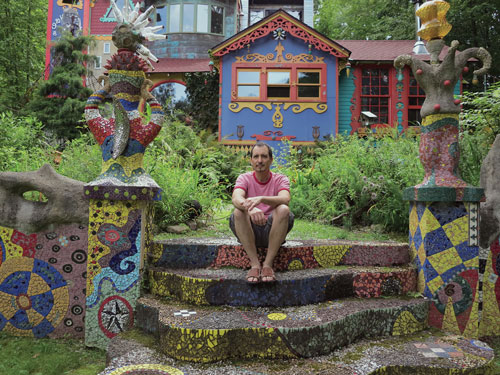 Twenty-five years ago Ricky Boscarino bought a hunting cabin in the Sandyston woods and has been modifying it with a passion ever since. It is Luna Parc, an environment created by Ricky, artist, jeweler, builder. On the way to the ballroom, we stop in the library with collections of reference books, street rubble—man-made detritus from his travels, an anthropological comment on anything architecture and artifacts. And trench art—spent cannon-fired artillery shells from World War I—most bought in Europe where the shells are still being found by farmers. These painted and sculpted brass tubes are quite beautiful.

Today we sit in orange chairs in the airy, second floor ballroom where there’s nary a spot to dance. On the walls, four stained-glass windows represent life, portraits galore and a chandelier of well-used items all made by Boscarino. There’s even a sundial in the wall that the house itself uses. 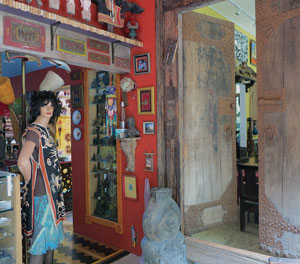 “I love building,” he says. “I come from a long line of builders. Old Italian men and women. They could do anything.” Boscarino began building and making art “in the womb” and grew up in a family in nature, doing and making things. He spends about 70% of his time working on his house, especially in summer. At least 80% of his income comes from the jewelry he makes, so he can’t ignore that, plus paintings and ceramics he sells at two Open Houses and craft shows. He does a few commissions of stained-glass and tile work and teaches workshops.

Boscarino has been making jewelry and working with metal for 37 years, since he was 14. Now it’s second nature and is the easiest thing for him to create although the decision didn’t come easy. His fascination with insects and animals coincided with a desire to study entomology but he ultimately chose to create beautiful bugs. Oil painting is his favorite medium. He graduated from the Rhode island School of Design. 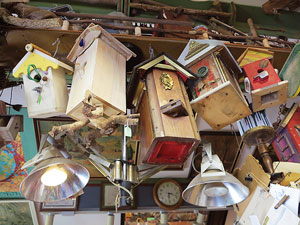 Outside, a chapel enclosed by a fence of wooden crutches was inspired by his grandfather who witnessed a crippled boy healed on The Feast of St. Biagio in Sicily. Monumental objects, places and environments, ancient and modern, that he visits when traveling also inspire him. “I made my mark in this lineage of visionaries – the people in history who created these environments I like to think I’m continuing the concept of creating environments, making history. I’ve been here a quarter century and feel I’ve really made my mark on this earth.” He is rooted here and it is this knowledge that allows for comforting travel, an iminent return to his home.

Twenty-five years ago, when a realtor showed him this property, it was the last one for less than $100,000. “As soon as I laid eyes on the house I knew I would spend the rest of my life here. I knew that anything I did here would be permanent.”