They Shoe Horses, Don't They?

So, think you know the difference between a blacksmith and a welder? Although hobbyist blacksmiths have increased in numbers over recent years, not many people know the answer. 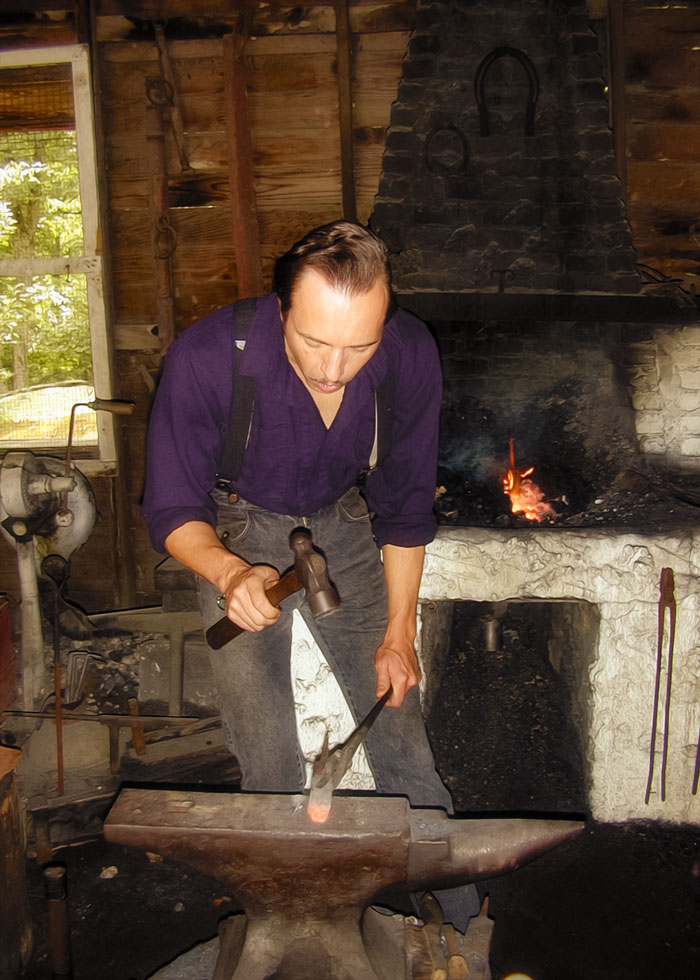 "Blacksmiths weld, but don't weld with torches," says Andy Drysdale, curator at Shippen Manor, a Warren County Cultural & Heritage Commission site in Oxford. "Blacksmiths do forge welding." They heat the metal in a forge until it looks like snow and the surface starts to melt. The metal is shaped and bent to a form that can be either welded together in the fire itself or on an anvil by hammering. Blacksmiths use a peen hammer to smooth and stretch the fluid metal, kind of like using a rolling pin to stretch dough.

Drysdale, who once specialized in making historical chain by welding overlapping pieces together on an anvil, says, "When torches came along they came as a separate trade, not sculpting as with a hammer. And you bring the fire to the work, not the work to the fire. Everything turned around at this point."

The last wrought iron was manufactured in England in 1958. Now blacksmiths use "mild steel," a low carbon steel, and, at places like Peters Valley Crafts Center in Layton, blacksmiths order it from metal suppliers. "I've had the good fortune to work with antique wrought iron," says Drysdale. "The material that blacksmiths used 200 years ago was very different from the material they use now." Wrought iron contained silica which, when put in the furnace, became molten glass, making it easier to work with than steel, although mild steel can be stronger.

How to tell what's in that antique fence you've just bought from an antique dealer? "Wrought iron doesn't rust to dust like steel when it's exposed to the elements," Drysdale says. "Steel is very fibrous and looks like celery. The steel will rust and rust away to dust."

As many kinds of blacksmithing there are, a trend is evident. All three men interviewed for this article grew up around metal and machinery.

"I grew up on a run down farm where there was an anvil and a lot of metal laying around," says Drysdale. "I was always interested in history. At Cooper Mill I studied about blacksmithing and I did all the hammering I wanted to do." Drysdale began work as a full-time blacksmith at Waterloo Village for five years. He served time as director of the Red Mill in Clinton and has been blacksmith at Wild West City in Andover for 11 years, working weekends. Since 2004 he's been at Shippen Manor, a 252 year-old stone mansion that was once the iron master's residence for Oxford Furnace (908-453-4381, www.wcchc.org).

The greatest demand for Drysdale's smithing skills was at Waterloo, where he forged things for the Village itself. He made everything ­ barbecue grills to machine parts and even did repair work on horses. He made decorative interior pieces and was also required to interpret to roughly 2,300 daily visitors. "We talked from 10 to 2 or 3, then the work day began."

Drysdale says that in the last 10 years a revolutionary interest in blacksmithing has greatly increased the number of hobbyists practicing their craft at historical sites. Where there used to be two or three salaried professionals, now unpaid hobbyists have stepped into this interpretive and work role. "More power to them for keeping it alive, but it has killed the side of historical sites hiring professional blacksmiths," he says. "A better way to keep the trade alive is to give people the opportunity to do it professionally and not settle for hobbyists." 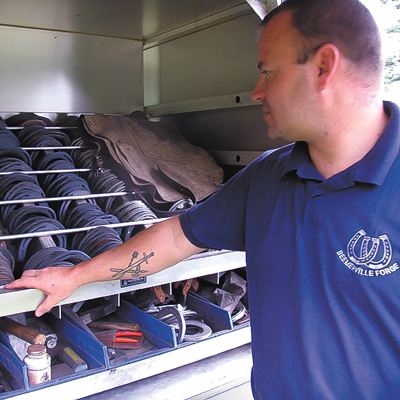 Ken Warren, farrier and blacksmith for 11 years, grew up in Sussex County around horses and dairy farms. In his early 20s he got a job at a hack stable as a stable hand and watched the man shoeing horses there. "It looked like fun...with a sort of romance to it," he says. He apprenticed with a farrier in West Orange for two years, took a six-week course in shoeing at the Tennessee State Farrier School, then began working for others while he started Beemerville Forge in Beemerville.

About 14 times a year, Warren parks his truck near a horse show ring as the show's farrier to be on hand to repair broken shoes, replace lost ones, and generally doctor up ailing equine hooves. Recently he worked at the Smoke Rise Riding Club Horse Show in Kinnelon.

In his truck he carries five standard-sized shoes with clips and a few generic unclipped sizes. Because horses' feet differ just as much as humans' in size and shape, he shapes the shoes he carries to fit the foot. As a member of the American Farrier's Association (www.americanfarriers.org) he is working his way up past "tradesman" to be a "journeyman." To get to his current level of "certified" from beginner farrier, he passed a three-part test. He had to shoe two feet "hot or cold" within an hour according to guidelines; make modifications to an unclipped shoe; and pass a written test on anatomy and shoeing.

On blacksmiths in general: "If you ask one if he shoes horses he might throw a hammer at you. Some blacksmiths I run into look at their work as more of an art. Being a farrier," he says, "is more horse-oriented. It is an art. You can see the difference between the old-timers and those who strive to do better." Warren learns at monthly meetings of the Garden State Horseshoers Association where they test new products and hand make shoes from steel bars. He also studies. "You have to know how a horse moves to accomplish his job. A horse is an athlete ­ therefore there's a lot of research that goes into them."

Warren shoes a horse every four to six weeks, depending. He takes the old shoe off and balances the foot according to its leg conformation. "We keep everything in line and moving smoothly without putting much stress on the tendons and ligaments."

First he trims the foot, finds the right shoe, then heats it up in the portable forge until it glows. He shapes the shoe by beating on it with a hammer. He burns it onto the hoof (made of keratin like a super-thick toenail) for a few seconds ­ this process does a lot of small tasks like showing him the exact shape of the hoof so he can shape the shoe. Then he dunks the hot shoe in a pail of cold water, grinds it, and nails it on. This is "hot-shoeing."

Warren does the shows between shoeing horses for his regular customers and subbing for other farriers. "As much as we compete against each other, we help each other out. Your own way used to be a guarded secret around farriers and blacksmiths." Back at the Forge, Warren, who took classes at Peters Valley, makes ornamental items like candlesticks and wine racks. He wants people to know," It's not a dying art. There are not enough guys out there to meet the demand." 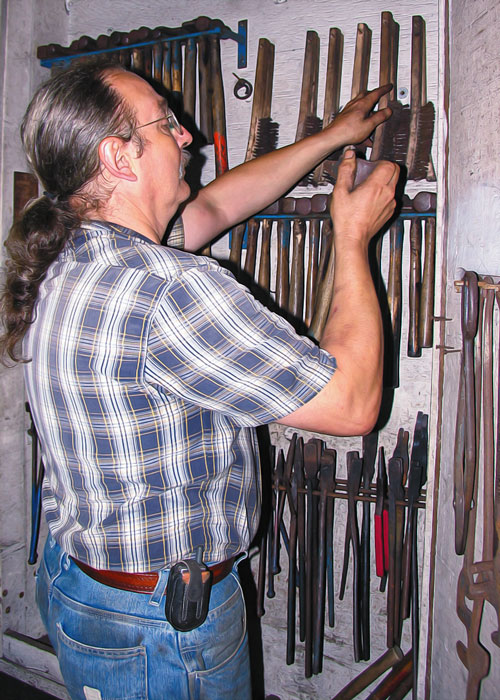 Dick Sargent, department head of blacksmithing at Peters Valley, teaches and arranges classes in all aspects of blacksmithing ­ knife making, architectural iron, house furniture, tool making, or pure art like sculpture. But he is clear ­ there are no classes in welding in the blacksmith studio. "We're here to teach forging, how to shape material, from modern and contemporary sculpture to traditional colonial hardware," he says. "I think there's a niche for everybody. When you study traditional stuff it's like studying art history. If you learn the basics of all traditional stuff, it can be applied to modern stuff."

Sargent and staff teach their students how to use the tools of the blacksmith trade. It's all hands on. "A lot of people who go to art school are taught a lot about design but not about tools and how to get there. Iron and steel sculpture is in a lull at the moment," says Sargent, who explains that in recent years art schools think that if they teach skills they are interfering with creativity. Not so at Peters Valley where teachers are chosen on a skill-based way of learning.

In the blacksmith studio, nine stations each complete with anvil, a coal forge, a vise and tools, plus two extra gas forges, await eager students. Many of the tools here are old, centuries even. "When blacksmithing got revived 40 years ago it was the dawning of recycling. Blacksmiths thought, 'We can make things out of junk!' What's amazing is we use tools that were made hundreds of years ago." In the shop, students use hand-made pre-Civil War vises that have sculpted decorations. Why? "Because they had an aesthetic and that's what looked nice," Sargent says. "Everything you looked at had something pleasing about it. There was no reason for it. It was something about making your life more pleasant."

Some knifesmiths in this country still make their own blades and can demand high prices if they are artistic and have a good reputation. "There are certain times throughout history when blacksmithing was considered an art or not. It's a proletariat sort of thing," Sargent says. "There's a lot written about how it fit into society. There has always been an argument about good and bad blacksmithing. There are people who work to survive and those that do it for love. Talent has very little to do with success."

So how did Sergeant, a trained airplane mechanic, get interested? He grew up in family machine shops as a 3rd generation mechanic. As a kid he had seen blacksmithing and always looked at art, so he decided to learn blacksmithing to fill in time between jobs. "It's addictive," he says. "There's nothing else as personally satisfying as forging. It's not only the creative side of it, but instantly I'm a lot better if I spent the day forging hot metal than doing anything else."