Along the Vintage North Jersey Trail

Warren County boasts more preserved farms than any other county in New Jersey. The county’s gentle hills are not only a haven for rural tradition and idyllic vistas, but also sanctuary for progressive ideas in agriculture. A portion of the western part of Warren County, along the Delaware and Musconetcong rivers and their tributaries, has been designated by the federal government as a wine grape-growing region. The soils and terrain of this part of the county, the Warren Hills American Viticultural Area (AVA), are most suitable for French-American hybrid grapes like Cayuga, Seyval Blanc, Chambourcin and Leon Millot. Take a leisurely ride from one Warren County winery to another and find out what happens with those grapes! According to Bob Matarazzo, owner of Four Sisters Winery in Belvidere, the ability to grow French-American varietals allows him to produce superior Leon Millot and Seyval Blanc. The Frontenac grape is a favorite for blending with the winery’s popular Warren Hills Red. Many of Four Sisters’ blends bring the fruit forward, some with a crisp finish and balanced acidity. 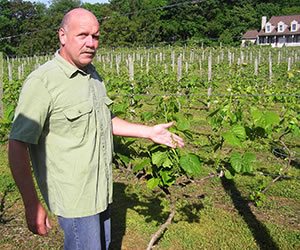 At Brook Hollow Winery in Columbia, owner Paul Ritter recently added five acres to his vineyards, which now host Noiret and Traminette, two grapes—one red and one white—developed at the New York State Agricultural Experimental Station at Cornell University, in Geneva, NY. Both hybrids, bred to flourish even in the cooler extremes of North Jersey’s growing season, provide excellent fruit structure for the quality dry wines that Ritter produces.

This story was first published: Spring, 2013