One of the appeals of operating a winery in New Jersey is scalability. Whether it’s a small family business or a growing corporate enterprise, the ability to address scores of niches in a population of umpteen million potential wine lovers within an hour’s drive is a natural energizer for a wealth of ideas. Some wines take a month, some take years. In Sussex County, three wineries have emerged that appeal to a broad range of people, all of whom appreciate good wine.

Gene Ventimiglia uncorks a bottle of dark red wine and pours a taste. “This is my favorite,” he says. “This is what my grandfather made. Enjoy the nose, it blossoms right up there! This is a food wine, very different. And the finish, it stays there forever, so when the beautiful women drink this they have to think of me!” This wine, Carignane, comes directly from an old family recipe that originated when his grandfather, Eugenio, was a professional winemaker in Italy. After he brought his family to Paterson, N.J., more than one household enjoyed a bottle of Carignane with dinner. “He didn’t stop making wine when he came here,” says Gene. “He sold a lot of it , although he probably wasn’t supposed to. That was the old days. And he taught me. When I got older, I was more than happy making six or seven barrels every year, just to do my own thing. But more and more people wanted to buy the wine from me. I didn’t want to get involved selling wine illegally, so I applied for a farm license.” 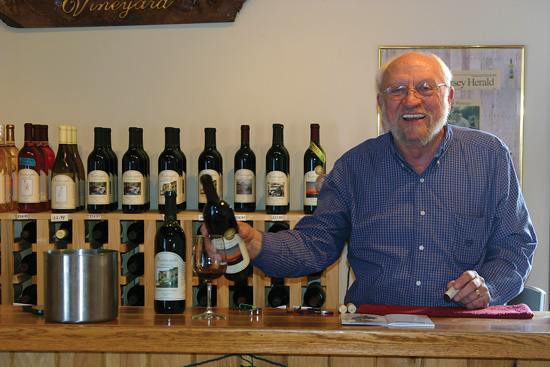 Gene and his wife, Anne, started growing grapes on a hillside in Wantage, a few miles north of Sussex borough, fifteen years ago. In 2006, they opened Ventimiglia Vineyard there, where the wine is made in the basement of a modest building that also houses a tasting room and retail storage. “It grew much faster than I expected,” says Ventimiglia. “Last year we grew twenty-five percent. And this year, thirty-five!” His son, Anthony, is now the full-time winemaker, and Gene is busy trying to keep up. His biggest problem is running out of wine.

Ventimiglia opens a bottle of 2010 Cabernet Franc. “This is the wine that got us into Latour!” The very exclusive Restaurant Latour at Sussex County’s Crystal Springs Resort, known worldwide for its nine thousand label wine cellar, is one of several high-end eateries offer that Ventimiglia wines. In recent years, Gene has spent considerable time and money entering and winning awards at international competitions in the Finger Lakes. This year, he’s not sure if he’ll be able to spare the wine to enter.

Next up, he offers a taste from a $45 bottle of Merlot (2010), his highest priced wine, which, along with the Cabernet Franc, is his biggest seller. Ventimiglia has found a niche among budding connoisseurs in northern New Jersey, and sells a lot of wine by the case, direct to consumers. “I go to places like the Montclair Farmers Market, take orders, and they come and pick it up,” explains Gene. The Merlot and Cabernet Franc are made from hand picked and sorted grapes grown near Cape May, aged in fine French oak barrels (they cost $1400 each). All but the Carignane and one other family recipe are made with New Jersey grapes, including several that use grapes grown right here on the Wantage hillside. Ventimiglia makes around ten kinds of wine each year. “I wish I did six, but we’re in America. People want choices!”

Gene mans the tasting room most weekends from 12-5pm. Tastings cost $5, and he does not sell wine by the glass. The rest of his time is spent networking, finding new outlets, and doing all those online marketing things that modern small businesses do. “I don’t do parties; I don’t want to do parties. But when people come in, we surprise them. It makes this a very fun job. I’m a lucky guy.”