Every Friday morning at the Bodhi Monastery Food Pantry in Andover, almost 30 women and men wait on line to receive food that will last them a week. Fresh fruit, vegetables and bread, some canned goods, and the prize ­ meat ­ frozen ground venison and roasts await the hungry's hands.

Sue Totin, a single mom with a disabled son, is one of the women there this week. She chooses a package of venison and says, "I make tacos and meatballs. It's not the first thing I make but it helps a great deal because I'm on an extremely fixed income. This helps me out and I don't have to go through the embarrassment of the state. I don't feel that I have my hand out. This is a beautiful thing that the monastery is doing. If there were no venison, I would be out four healthy meals a month. I do have soup, but every kid loves meatballs."

The Food Pantry served 93 families (253 people) this November ­ most of whom took venison. "It's the only high protein item that we can get for free," says Duke DeGroat, a volunteer who procures the food. "And we can use it with other less expensive food and fresh produce and make a full meal out of it.

Bodhi Monastery is just one of 130 food charities that gets food from NORWESCAP and the Ocean/Monmouth Food Bank to give to needy people. The Food Banks get the venison from Hunters Helping the Hungry, Inc., (HHH) a non-profit group of New Jersey hunters who donate deer. It's a grand program that, since its inception in 1998, has provided about 794,000 quarter-pound servings of protein to the state's hungry people.

But the program is in trouble, and people like Sue Totin and her boy may lose out soon. The problems are not enough money to pay the butchers for processing the deer and not enough butchers to do the work.

It all seemed simple ­ hunt the deer, have it butchered, and donate the meat. Everyone wins and the deer population is kept in check, too. In the beginning it was easy, especially when the state funded the group $95,000 in 2000, then $75,000 in 2001. By 2002, the state no longer supported the program, but the NJ Division of Fish and Wildlife gave a $50,000 matching grant in 2003 met mostly by NORWESCAP. That DEP money, too, has ended.

Why need money? Butchers charge the program $65 to process each deer. Up until 2004 when HHH became a 5013C non-profit, NORWESCAP administered the program and paid the butchers from a fund of grants and donations. Now, the hunter contributes $25 out-of-pocket per deer for butchering and NORWESCAP pays the other $40. Butchers contribute by not charging their full fees.

Now the program lasts as long as the donations last. HHH relies on churches, Rotaries, and sportsmen's clubs for donations but it's hard asking the same organizations for money every year. Everyone's running low and when funds get used up the program halts. "If we could run the program continuously, it would be more successful," says Cathy Rummel, HHH trustee and co-director of NORWESCAP Food Bank. "But some years we have to shut down so the hunters never really know if the program is on. If they did, we could get more deer. The state is not lacking in deer, hunters, or people in need. We hate to say the program is closed ­ we just take a little hiatus."

Hunters bring deer to the butcher and NORWESCAP picks up the meat from the butchers and distributes it to five Food Banks throughout the state. "At first we couldn't give venison away. Now they wait in line," says Rummel.

The second major challenge the program faces is not enough butchers. In order to process deer for the program, butchers have to be inspected by the state and USDA. Butchers are concerned about not meeting state standards, but if they are already USDA approved, there should be no problem," says Mike Aversa, a founder of HHH and its prime advocate along with Rummel. "A typical butcher capable of handling deer is a slaughterhouse for farm animals. (They're not so easy to find.) The Board of Health inspects every one of our butchers. Without this program there would be 5,000 less deer that have been killed in this state." 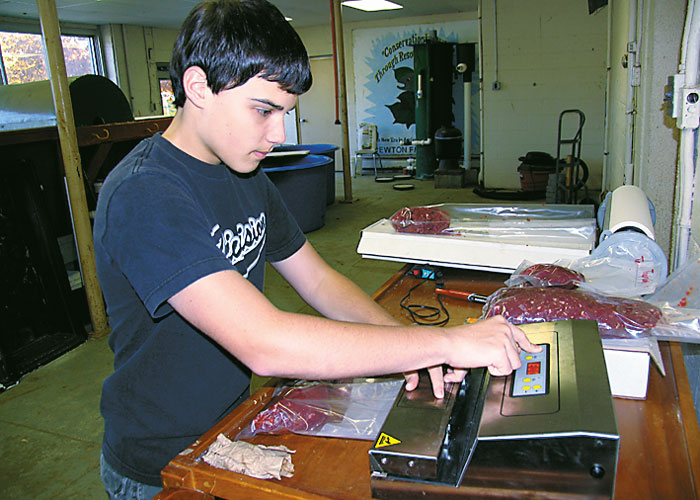 Recently two young men cleaned and scrubbed the head of an 8-point buck in the driveway beside the open doorway of the ag building at Newton High School. "Oh yeah, that's looking sweet," says one teen. They are preparing the head for a European mount, and learning as they go. "The kids looked up on the web how to do it," says David Petee, teacher of this Wildlife Management class.

Petee discusses the head with them, showing the lack of teeth and palate and how they have to yank stuff instead of neatly biting off vegetation. He tells them how to tell the age of a deer, size of molars and antlers. A hunter donated this buck to the class and is getting meat back - butterflied steaks and backstrap that's like a filet mignon.

Petee and his class have been butchering and donating deer to NORWESCAP since 1998. It was a winning situation for all. Students learned how to butcher a deer and cut meat and NORWESCAP received the venison for free ­ they didn't even have to pay for the butchering or pick it up. But that, too, has passed.

But sometimes strange things happen to good butchers. This year, the USDA told Petee his class couldn't contribute anymore. "The state said we don't butcher enough deer to make it worth their while to come up and inspect our facility," he says of the Hackettstown office just 12 miles away. "But that doesn't mean I'm going to stop. I've been butchering meat in this class before their program even started. We'll butcher our deer for our own ag program.

"If the USDA has problems with the inspection side, then it needs to be addressed," he continues. "Instead of shutting somebody down for no reason, I say work with us. This is an educational opportunity to learn about butchering and then perhaps more kids will go into that field. I'm disappointed that we're not involved in it, but it doesn't mean we won't butcher deer."

Petee teaches hunter safety in his class in a certified hunter education course. "We take the kids out and they harvest deer. We bring those deer in here and we butcher it. If there are families in our ag department who are in a situation where they're needy just like the people who go to the Food Bank... if we have the meat for them we'll give it to them. We're not soliciting anybody.

"We butcher here for our kids, for our class, or to help out. I'm giving it basically to the kids to take home and share with their families. Everybody involved is a family together. Everybody who walks through this building and stays in the program is in the Ag Ed Family and we choose to take care of our families."

Petee keeps the doors of the garage-like meat room and butcher shop open to "desensitize" the students as they pass by. Some of Petee's kids became butchers. Some built the meat room's accoutrements during class because the meat inspector wanted the room to be separated. "It's been inspected by the state and it passed. We did about 6 to 10 deer a year, once up to 30. But when they started the $25 thing, people stopped bringing deer in."

Petee says HHH is a phenomenal program but needs funding and that when hunters didn't have to pay, getting deer was much more consistent.

"We would like to see this program have enough funding so hunters can take the deer in and we can get meat out to the community," says Aversa. "As long as we can keep getting donations, we can keep the program going."