It is, except for the completion of a few bridges, now possible to hike a continuous distance of nearly 50 miles on public trails through Sussex and Warren counties. The 21.2 mile Sussex Branch Trail begins at Waterloo Road, one mile west of Route 206 in Byram, and intersects with the Paulinskill Valley Trail at Warbasse Junction turn just north of Newton before terminating further north in Branchville. Heading southwest through Fredon, Stillwater, and Blairstown, the 26 mile Paulinskill Trail ends near the Delaware River at the Columbia Lake Wildlife Management Area in Knowlton Township where it is possible to link with the Appalachian Trail and the huge network of trails in the Delaware Water Gap National Recreation Area.

The trails, part of the linear Kittatinny Valley State Park, are a legacy of some of the many railroads that once thrived in northwestern New Jersey and the principle, in practice, of adaptive use. Railbeds for the former Sussex Railroad (Sussex Branch) and NY Susquehanna and Western (Paulinskill Valley) railbeds provide cinder-based paths of modest grade for the pleasure of all ages, including the very young and the very old. Besides being easy for walkers, the "too-straight-to-be-real" are perfect for horseback or mountain bikes.

Along the way, the attentive will notice a progression of artifacts from the rail era, from station foundations, mileage and whistle markers, cattle passes, battery boxes, railroad bridges, creameries and ice houses that serviced the lines in their heyday. Not only remnants from the great railroads, but also signs from the mining and agriculture traditions of the region are apparent.

For the naturalist, the trails are a bonanza. Along the Paulinskill Valley Trail alone, hundreds of bird species of have been counted. The trails provide an excellent place for the observation of beaver, deer, mink, muskrat, otter, and other wildlife. And, because the railroad often acted as a super pollinator, spreading seed from unknown, far-away places, many unusual and non-native plant species are evident along the way.

Besides their value as recreational resources, the trails represent some of the best reforestation in the region. The Paulinskill River, once devastated from years of agriculture and railroad service is now a source for clean water, and the trail provides a buffer zone between the river and proposed development.

When you read or listen to the current debate about strategies and public policies regarding open space in New Jersey, consider the story of the Paulinskill Valley Trail and the group of people whose tenacity and commitment was essential in making the 102- acre linear stretch available for public use. For all its merits, the problems and conflicts inherent in acquiring the property took nearly a decade to resolve.

When Len and Erica Frank moved here from Illinois in the 1950s (Len to take a job at Picatinny Arsenal and Erica teaching at Centenary College), their appreciation for the countryside of the Northwestern New Jersey was immediate. They told their kids "We won't ever again have to go anywhere to take a vacation!"

The couple helped form a new Northwest New Jersey Sierra Club group, began leading hikes all over the area, and got into a number of projects including Tocks Island and trail establishment in the subsequent National Recreation Area. The former Susquehanna and Western railbed between Sparta Junction and the Delaware River had been purchased in 1962 by the city of Newark for $22 million as a water conduit connecting the proposed Tocks Island Dam reservoir with the Newark watershed in Pequannock, which in those years was threatened by drought. When the Tocks project stalled, the trail gained popularity among outdoor enthusiasts for hiking, biking, cross country skiing, horseback riding, and fishing. Until 1984, a rails to trails project gained support from members of the Sierra Club and the Resource Conservation Development Project, headed up by Erica, which funded a comprehensive report about the value of the proposed trail.

When New Jersey's Department of Environmental Protection finally announced in 1985 their plans to purchase the trail, they were met by furious opposition led by landowners along the trail who, for good reason, wanted to repurchase the tract backyard by backyard, and who boasted support from most every relevant politician. After a public Green Acres meeting in Blairstown at which trail advocates were shouted down, a small group of them decided to form an ad hoc committee. Len, because of his Sierra Club background, became chairman of the Paulinskill Valley Trail Committee. It was the beginning of a seven year campaign for public ownership of the trail.

Green Acres clearly wanted the property. There was potential for one of the premier trail systems in the state, and those that had done a lot of walking knew how this right of way could hook up to other paths. The Committee got $1,000 seed money and went to work. "My principal has always been: take people out into wilderness or open space, and that will be the basis of their education and their involvement in conservation activities," explains Len. "Appreciation causes response in kind." The committee began conducting hikes on the Newark property. Frank adds, "I have no idea how many times I've walked the Paulinskill, but there was a time in that ten year period that we realized we had accompanied 1000 people on Paulinskill Trail hikes. We made lots of friends throughout the state and were supported by the Sierra club."

The committee took their carpet bag full of maps, pictures, pamphlets and petitions to public events and places -- the Sussex Farm & Horse Show, Warren County Farmers Fair, Sussex Airport-- wherever they had to go to raise public awareness. They sold caps, mugs, t-shirts and committee memberships at $10 a year to supplement their treasury. They did whatever they had to do to prove that there was, in fact, strong local backing for the trail. But, although polls regularly indicated over 90% support for the trail, political support was painfully slow to come.

The prevailing political attitude of the time seemed to indicate no need for dedicated open space, that there was more than enough room for the "normal" course of development. At one point, in fact, a bill was presented to the state legislature that said Green Acres could no longer purchase land in Sussex County. But it was, -- in the face of a dissenting state senator, two state assemblymen, three Warren County freeholders, and scores of councilmen and planning board members, -- the Sussex County freeholders that finally came around. The Sussex resolution showed Green Acres the support they needed to bring the purchase to Governor Kean, who authorized it.

After evaluation of the property's value by Green Acres, the state's initial offer of $465,000 was abruptly turned down, and negotiations with the Newark Council began in earnest. Even at this point, the trail's fate seemed a matter of political whimsy. DEP emptied its pockets and found a total of $700,000 to make as a final offer for the property. Frank remembers "About ten of us went to the final meeting where the Council was to vote. We had a lobbyist, too. One of the key council members said that the property was worth a million dollars, and that that's what they should get. The final vote was, I think, seven to four. We lost it." But the timing of the council meeting was propitious, not long after the new Whitman administration had been elected. The Trail Committee had done their political homework and convinced Warren County legislator Chuck Haytaian of the trail's benefits. It so happened that Haytaian had just become state Speaker of the House. Len continues, "Finally, one guy gets up and says he'd like to change his vote in support of Mr. Haytaian. The trail was ours." 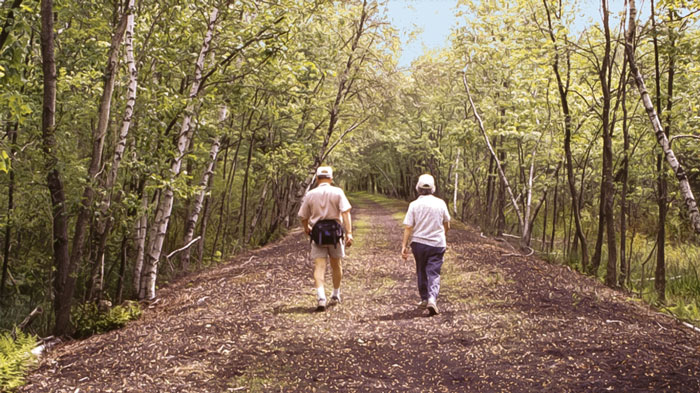 Since Paulinskill Trail became part of the New Jersey State Park system in 1992, the Committee has remained active. Ad hoc no more, the group holds monthly meetings and continues to be a force for environmental and open space issues in New Jersey.