The emergence and duration of native wildflower displays can vary annually, depending on temperatures and rainfall. A hot, dry spring often means a shorter bloom time, with plants preferring to use reserves for root and leaf growth. A cold spring pushes flowering later. In addition to climatic patterns, wildflower displays are affected by past human uses of forests. Broadly speaking, the most diverse forest ecosystems are ones with the fewest human interventions dating from modern times. Untouched land in New Jersey is rare if not non-existent. Musconetcong Gorge Reservation has a special mix of natural and human history that makes it a rewarding botanical site in the late spring months of May and June.

Musconetcong Gorge Reservation in northwestern Hunterdon County is an exemplary mesic (temperate hardwood) forest featuring notable plant diversity at all levels. From earliest spring, even before the trees leaf out, to autumn, a slow-paced walk reveals abundant wildflowers. May through June at the Gorge boast dozens of flowering native plants from showy to cryptic. The trails at the 523-acre preserve are for hikers only, making for a peaceful ramble. The finest wildflower spectacles are found along the narrow, rugged, and rocky trails emanating from the entrance on Dennis Road in Bloomsbury. Hunterdon County Division of Parks and Recreation oversees this well-traveled but wild-feeling preserve. A trail map is recommended.

Here, the soils are rich and moist, yet well-drained. The landscape is steep and rocky. The sloping terrain faces primarily north, creating cool, moist and shady conditions throughout the spring and into summer. At the base of the gorge flows the scenic Musconetcong River.

Vines are uncommon at the preserve, but this section of trail has an occasional carrionflower (Smilax herbacea). This small vine scrambles up smaller shrubs. It bears green pom-pom shaped clusters of flowers that smell like rotten meat upon close inspection. Many flowers with such aromas are pollinated by flies, but the comprehensive Illinois Wildflower website notes that small bees and beetles also visit to collect nectar. Plant diversity along the Gorge’s trail engages all the senses. 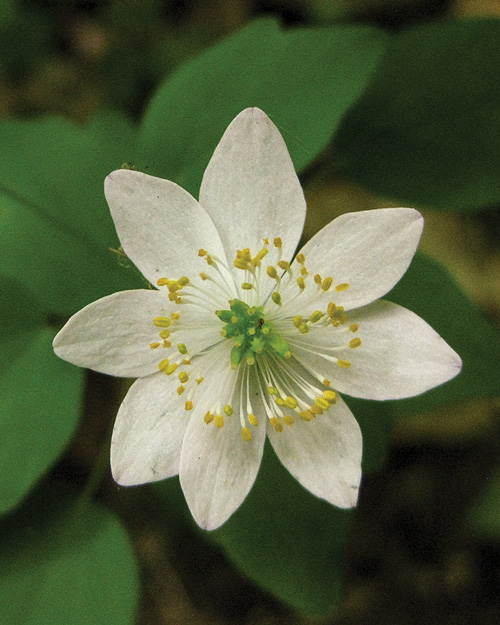 Rue anemone is an early bloomers in the Gorge. 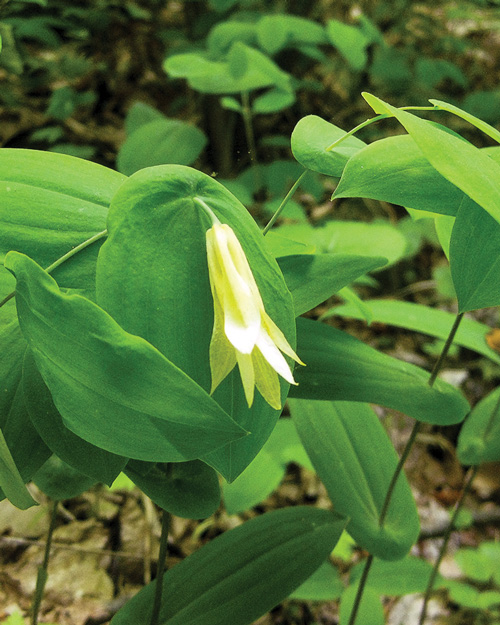 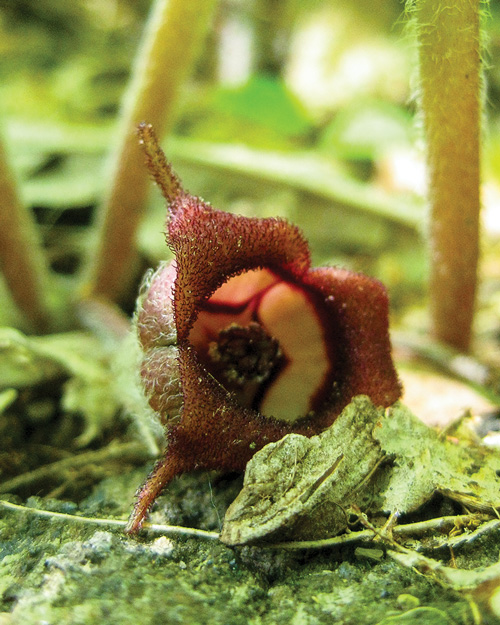 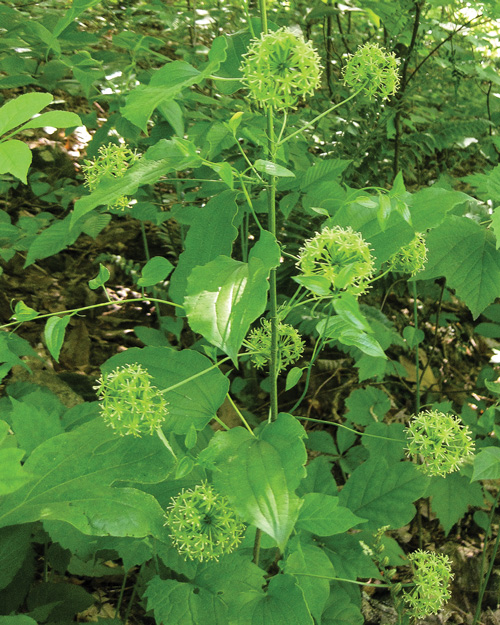 Carrionflower has an odor that attracts flies. 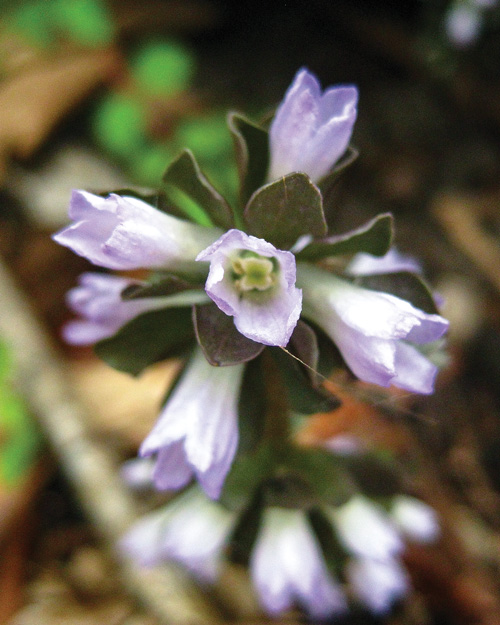 Virginia pennywort is one of New Jersey’s rare plants. 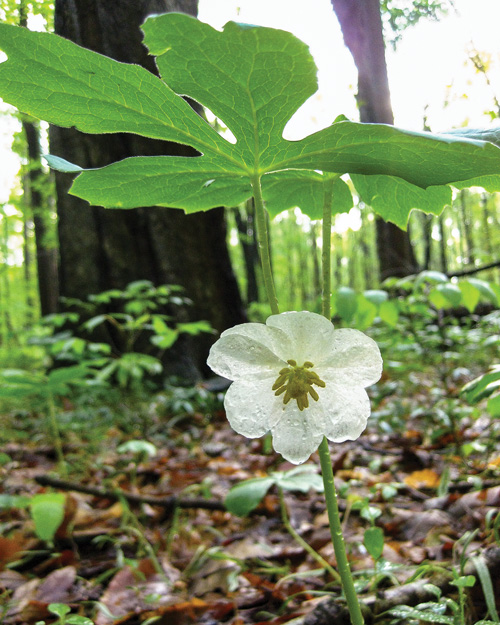 Silver-dollar sized flowers of Mayapple hide below the foliage. 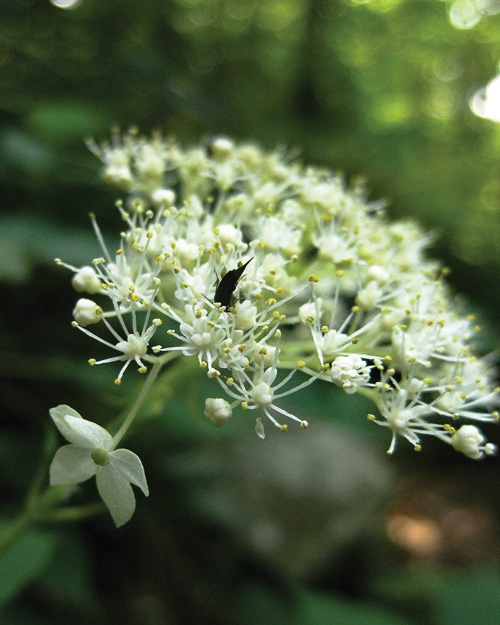 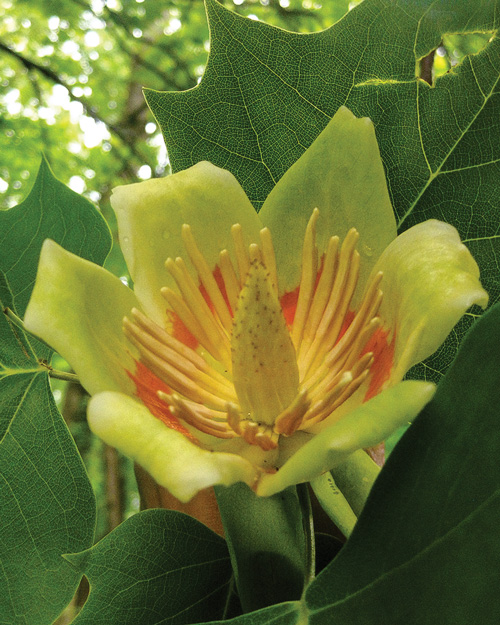 A close look might yield more hidden treasures of the plant kingdom. Virginia pennywort (Obolaria virginica), a member of the gentian family, blends well with the leaf litter. This small, difficult to spot wildflower has lavender flowers. One of New Jersey’s rare plants, pennywort is listed by the NJDEP’s Natural Heritage Program as “imperiled”. By the state’s definition, this means only six to twenty populations are known in New Jersey.

Foliage plants are often overlooked, yet the textures of green at Musconetcong Gorge are artful. Solomon’s seal (Polygonatum pubescens) is easily confused with the showier Solomon’s plume (Maianthemum racemosum), but hides its bee-attracting flowers under its satiny leaves. The pendulous greenish white flowers are worth a peek. Also hidden below foliage are the silver-dollar sized flowers of Mayapple (Podophyllum peltatum). Mayapple grows in colonies of large, umbrella-like leaves. Flowers are found only on stems with paired leaves. Last on the list of leafy beauties is maidenhair fern (Adiantum pedatum). Thin but strong black stems give rise to a graceful u-shaped arc of leaflets.

Before the trail descends to Scout Run, hikers can spy through the trees to the agricultural fields below in neighboring Warren County. The Gorge itself was far too rocky and steep for tillage. Annual crop agriculture eradicates forest wildflowers. Even when a field has been long abandoned, such wildflowers rarely repopulate. The lack of agricultural tillage at the Gorge has protected native wildflower populations. The story of rocky terrain offering refuge to plant diversity is repeated across the state.

While this pocket of diversity suggests untouched land, timber has been heavily extracted from this site. Historical accounts reveal that the lower Musconetcong valley was completely deforested by the early nineteenth century for various industries. In fact, an inactive paper mill, formerly owned by the Warren Manufacturing Company and more recently operating under the Fibermark, Inc. moniker can be seen from the portions of the trail.

The dogwoods of the Gorge are also worth mentioning. Flowering dogwood’s (Cornus florida) large, white sepals light up the forest’s mid-canopy. This elegant small tree is popularly planted in landscaping. Notably, the actual flowers are quite tiny and green. The four large white petal-like structures surrounding the flowers are sepals, serving as enticements to pollinators. Dogwoods typically have an opposite branching pattern, but pagoda dogwood (Cornus alternifolia) breaks the rules. Its flowers are similar to the viburnums and are found on candelabra-like branches.

On the lower trail returning to Dennis Road, towering, pin-straight tulip trees (Liriodendron tulipifera) line the footpaths, which are much less rocky. Far above the diminutive plants of the forest floor, they set abundant blooms of orange, yellow, and green and produce copious, sticky sweet nectar. The near pure stands of tulip tree echo the widespread tree cutting at the Gorge. Tulip tree produces abundant, wind-dispersed seeds that germinate readily and grow quickly. Notably, this section of the trail has fewer species of wildflowers and flowering shrubs, telling of different patterns of human use here than along the abundant and diverse upper trail.

For fans of native plants, this trail has much to see and little to complain about. Deer browse has less of an impact than in the surrounding landscape. Invasive species populations, another bane to plant diversity, are relatively low at the Gorge. Mugwort and tree of heaven track a few utility right-of-ways. Garlic mustard is fairly frequent however, particularly around the “charcoal landings” (areas of dark flattened soil along the trail). Here, trees were burned to create charcoal. This 18th century industry still affects the plant life today.

The best ways to enjoy New Jersey’s late spring wildflowers are in person, using the senses. Smell the roses—and the carrionflower, too, if you dare. Gently feel the silky texture of Solomon’s seal and wild ginger. Let your eyes and camera record the colorful petals, sepals, and leaves.