Just as there are those who would rather curse the darkness than light a candle, there are folks who would rather complain about the winter weather than embrace it. For the lucky ones living in the Skylands Region, and those enjoying an extended visit, there are plenty of favorable options to griping.

Rather than moaning about scraping the car and shoveling the sidewalk, think of those exercises as planning an escape route to enjoyment. There are fun times waiting just around the corner at the region's various ski resorts, such as High Point Cross Country Ski Area, Stirling Forest in Tuxedo, NY, Shawnee Mountain in the Poconos or Hidden Valley and Mountain Creek in Vernon.

Granted, many of you will be quick to say, "That doesn't help me. I don't ski and I can never learn and I can't afford it... blah, blah, blah."

That's where you are wrong.

Getting down to business at Shawnee Mountain

"Anyone can be a skier," says Ronnie Manfredi, Shawnee's Ski School Director. "We've had people 70 years old here to learn. It doesn't take much effort. It just takes a little patience. The biggest problem in skiing is fear. It takes time to conquer it, but we put people on the skis and try to break them out of that. With the equipment today, the ski is going to come free (in a fall) and reduce most of the injury factor."

As for cost, 90-minute group beginner lessons, complete with rentals, are offered for as low as $50, which is often enough time to get someone going down a beginner's hill. According to Bob McGraw, director of Snow Sports School at Mountain Creek, that's when the fun begins.

"As soon as they get down that hill once, or even get to ride the lift up, they're enjoying themselves," McGraw says. "It doesn't take much."

The beauty of winter downhill sports is the variety. There is conventional skiing; cross-country skiing, which can be an effective pre-cursor to downhill; and snowboarding. All three offer a chance to enjoy the fresh, crisp air of the winter, provide some exercise and give you a rush that can not be experienced watching TV and eating junk food all weekend.

The old stand-by is downhill skiing. While an ideal starting age is between four of six, people of all ages are taking to the slopes. Granted, you have to want to do it, as no one will enjoy themselves who is forced to try something against their will. But if you have the desire, amazing technology in equipment has made the sport user friendly, even for beginners.

"We're teaching on short skis this year," Manfredi says. "When you start out that way it gives you a little more confidence so you don't have to worry about swinging around these long skis every time you make a move. You start on a short ski which progressively gets larger. It seems to work a lot faster in the learning process." 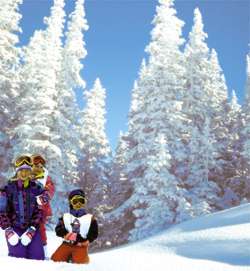 And therein lies the key. In this day and age of busy schedules, people seek instant gratification. By using a short ski and starting pupils out on gentle slopes, skiers are experiencing the excitement of going from top-to-bottom of a hill in just one lesson.

"The learning curve has increased," Manfredi says. "Over the years people got away from skiing because it became too much of a challenge. We're getting back to where it's not a challenge, but more enjoyable. People are learning to ski faster, enjoying it more and coming back more."

"Most people are ready for the lift after a 90-minute lesson. After learning on the short ski, it becomes easier when they get to the bigger skis. Now they know what it's all about, it's just a matter of moving up in size. From there, the length of skis gets longer, which you have to have when you want to get going down the steeper hills."

Manfredi adds that a group lesson is often more effective than the more-expensive private lesson. Granted, you receive more attention in a group of one, but sometimes misery loves company, as the old saying goes.

"With a group, the people have the camaraderie of having someone else not doing well for a while, so they don't feel so bad," Manfredi says. "And there's the idea of watching someone else do it. You learn from watching."

Or, as McGraw says, "If you're falling down in a group lesson, it can still be fun if you're with the right group."

There will always be those negative-thinking people who claim they have no balance so therefore, can never get on skis. The instructors don't buy it.

"I don't know anybody that has a problem with balance," Manfredi says. "Once you get on skis and find your balance point - which is directly over the center of skis - it's like walking. You don't trip while you're walking after you learn to do it."

The two biggest keys for beginning skiers are to have patience and to come dressed properly, especially around the feet.

"Most people come out with two, three pair of socks," Manfredi says. "Just wear one pair of decent socks. Ski socks and boots must be comfortable and tight. They're not going to fit you like a slipper. They should fit like a tight-fitting glove. Every move the foot makes gets sent to the ski so the ski can make that same movement.

"And the important thing is be patient. Take your time, because once you learn, it's going to last you a long time. People are afraid that don't want to take a chance. With the new short skis, you're not taking a chance."

If that still is not convincing enough, start off with cross-country skiing, which can be done over gentler, more level terrain. It also provides more of a variety for the skier who does want to ride up a lift and go down the same slopes. It can also be less expensive than downhill skiing.

"Most people, when they start cross-country skiing, they're starting where it's flat and you're walking or sliding down the trail," says Hans Karlsen, owner of High Point Cross Country Ski Center. "All you have to worry about is taking a step, and there's not much speed out of that. It's kind of like walking down the street, but instead of lifting your feet and taking a step, you just slide the ski along and take the same stride.

"The nice thing about cross-country is you're not limited. You're not standing in lift lines; you can ski on un-groomed trails and groomed trails. And most of the cross-country ski centers I've been to, there are usually no sharp corners you have to get around, it's nice and gentle. If you want to ski in the backwoods, you can get some beautiful panoramic views, some fresh air and exercise. You feel great when you get back."

Rest assured, though, there is some work involved. Cross-country skiing burns more calories than any other activity except swimming, as skiers are using every part of their body to cruise along. Skiers will encounter slopes along the way, some gentle, some steeper, so it is imperative to pay attention to where you ski. Finally, depth of snow is also important.

"If you go into deeper snow, you're going to slow down real fast, and you might do a face plant," Karlsen says with a laugh. "And if you go to less deep snow, chances are you're going to speed up. Sometimes when the snow changes depth, it's like America's Funniest Home Videos the way the skiers react."

The bottom line is, cross-country skiing can also provide quick results for beginners, as Karlsen says, "I would guess that in our beginner classes, probably 90 percent of the people in the classes don't fall once. Then they go out on the trail and might fall once or twice the rest of the day. Most people are out skiing the slopes after a 50-minute course. It's a great way to ease into downhill skiing, but a lot of older people start with cross country and stick with it because they don't' have to deal with the gravity that much."

At the other end of the spectrum is snow boarding, which began as a sport for the youth, but is rapidly moving up in age.

"We teach kids who are five and six years old, and we also teach their parents in their 40s," says Shawn Fox, Hidden Valley's Snowboard Director. "A dad in his 40's wants to learn because his little kid is learning it and he wants to be out there with him."

Unlike skiing, snowboarding takes longer to become comfortable with. Fox estimates that "the biggest challenge they face is getting past the first five hours on the snow, because that's the time that it's very difficult. You fall down a lot and it's very tough and challenging. But once you get past four or five hours, most people think it's easy. Your progression from intermediate to advanced goes much quicker than your progression from beginner to intermediate."

As opposed to skiing, where each foot has a ski, both feet go into the snowboard. It is similar to skateboarding, and side-slipping is the method used to get downhill.

"Your body is facing straight downhill and you're going straight down," Fox explained. "You'll be sitting on your heel edge, which means your heel is pressuring the board, and you go down the hill. It's much easier on the body than skiing, not as much work as jumping one way or the other like you do in skiing."

Basically, while it takes longer to learn the nuances of snowboarding, you can become an expert boarder quicker than an expert skier. The key is patience and a willingness to take some lumps.

"If you're body can't take falling down on your butt a bunch of times, you're not going to be able to stick it out," Fox says. "We've had people try it once or twice and they've had it. So we try and get our instructors to ride with you face-to-face so you don't fall as much. That can help with your balance and it doesn't push you too much before you're ready. We also spend a lot of time where it's flatter. We keep one foot strapped in while the back foot is free, so you practice skating around like a skate board on tiny hills, building up your basics first."

Fox notes than anyone who skateboards or water skis can adapt to snowboarding, and also feels that downhill skiers might learn the sport quicker "because you have an understanding of edges, weight, balance. That stuff is more transferable and helps. If you have no concept of edges and turning on skis, you have no reference point for that on a snowboard.

"But a lot of kids start out snowboarding first. Skiing and snowboarding are two different things. It's hard to describe. You're closer to the snow; it's a more relaxing experience. It really opens up a whole new world."

And what a world it is. So give the snow sports a try, and you'll be surprised at how those dreary winter blues will be blinded by the light of fun.