In the Still of the Woods

Hunt, defined by Webster: to pursue for food or in sport, and to traverse in search for prey. Hunter-gatherer: a member of a culture in which food is obtained by hunting, fishing and foraging rather than by agriculture or animal husbandry.

Lance Casper with Billie and Pepe.

Lance Casper hunts for the enjoyment of his dogs, being in the outdoors and the exercise. "It's what keeps me healthy and young. The genetic imprint carried over from my ancestors is very strong within me. I love being out there. I especially enjoy watching the dogs work, bred through generations to do a specific task--hunt, point and retrieve."

In the parking lot way back in the woods of the state-owned Flatbrook-Roy Wildlife Management Area in Sussex County, Lance Casper, hunter, frees his dogs from the van. Billie and her son Pepe are German Shorthair Pointer gun dogs and also Lance's best pals in life. They're going woodcock hunting today and I tag along.

We don brush chaps that will allow us to walk through wild rose bushes and brambles without tearing our legs up with thorns. Lance puts on a game bird vest with a pouch in the back to hold birds. He picks up his 20-gauge-pump shotgun and puts a handful of shells in his pockets.

He uses lightweight shells to hunt the small woodcock, because he says a good dog points and pins the birds rather than chasing them into the air out of gun shot range. 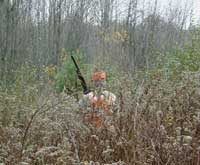 The hunt for woodcock takes Lance through tall fields of goldenrod and wild rose.

The limit is three woodcock a day or six for the season and, since it's a migratory bird, it's federal jurisdiction.

Pepe wears a wide orange collar so Lance can see him easily, and Billie wears a beeper collar. "She finds so many birds and gets in the thick of things, the only way to find her when she's on point is with a beeper."

We head into the woods and the dogs run ahead, circling, never stopping or even slowing despite the terrain--hills, water, muck, thickets or rock--it doesn't matter. They are hunting for game.

Lance checks the familiar ground that, despite the recent rain, is hard and relatively dry. Woodcock like soft, wet ground to probe for earthworms and microscopic worms with their long bills. If the ground is hard and dry, they can't eat and won't stay in the area on their way south.

The dogs return and zoom around us as we make our way through shrubs and chest-high goldenrod. Lance says they check in with him to let him know they're with him, and to let him know where they are. "It's a team effort. An independent, self-hunting dog is of no value to me. That's not a companion. A shorthair is a hunting companion, a biddable, co-operative dog that wants to please you."

We walk along the Big Flat Brook. Woodcock follow specific routes, usually waterways, and one of their main routes is the nearby Delaware River. Suddenly a bird takes flight from right near our feet. A woodcock! But Lance doesn't shoot it because the dogs didn't find it. "I would rather let the dogs find it. That's why they're here."

Lance hunts mostly for the dogs--it's what they're bred for and live for, and when they go hunting they like to find the birds, point them for him, and then retrieve and deliver the bird to hand--drop it into his open hands. They want to follow through the process.

We follow the bird to a tangle of wild roses, barberry, and shrubs. Lance whistles softly for the dogs and motions to them to go into the dense brush where they'll smell the bird. They're on point--they found it. We crash through and the bird flushes and flies.

The dogs on point. Pepe found the bird and Billie honors him.

Billie and Pepe point and hold point naturally, versus a human-made dog, which learns to stay put by being zapped by an electric-collar. They stand "steady to wing and shot"--that is, they stay pointing motionless when a bird is flushed and flies, and also when Lance shoots his gun. This genetic characteristic is exhibited in well-bred dogs. It's desirable for safety reasons--to remain out of harm's way when a shot is fired--and for the dog's ability to mark the bird--to watch where it goes in order to point or retrieve it.

Along a grassy lane near the brook, Lance spots an area littered with white chalky droppings, indicative of bird use. The birds may have walked through the area and are feeding nearby. American woodcock like the ground under apple, crabapple or Hawthorne trees because it's moist and friable, perfect for worms--a nice rich soil. Prime habitat is among young trees and thick shrubs that produce lots of leaves to make organic matter. "You have to know your spots--the migratory travel route and cover that will produce food for them."

Across the Big Flat Brook are seldom-used overgrown fields--more prime habitat. A huge tree, tangled up in branches and weeds, lies across the brook. Lance unloads the gun for safety and we pick our way across it.

We spin our bodies through the stickery brush so we don't catch any thorns in the face, then make our way over typical lumpy wetland topography--ankle-breaker territory. This is no light hike on a trail-this is bushwhacking.

Lance says that we have to get lucky with catching woodcock. Yesterday there might have been a half dozen here and tonight you never know. "That's why it's hunting. It's hit or miss. They're a migratory bird. They're not stocked here."

Billie beeps on point and has a bird pinned. We speed up to the thickets. Pepe is "honoring" Billie by pointing a short distance away. Lance doesn't see the bird and gives the dogs their release words. Pepe refuses to move and suddenly a whir of wings from behind our feet startles us. It's a pheasant!

"If it were pheasant season, that bird would be dead," says Lance. But Lance Casper respects the rules., and the bird flies away.

Back across the stream again, the dogs head into thick brush. They point and Lance thinks it could be a rabbit. He releases Pepe but Pepe won't give up. Suddenly a woodcock flies from the brush and Lance fires once but the bird is gone. He marks the bird's short flight by a row of trees where we search. Lance now thinks Pepe knew the bird was traveling on the ground and that's why he wouldn't stop pointing. This is Pepe's first time woodcock hunting and he's avid.

The dogs are on a relentless search roaming through the woods. They and Lance all take part in the decision on where to hunt as they move. Lance knows the spots, and the dogs circle and search by scent. Part of a dog's instinct is to expand his search. If a dog works within 30 yards and doesn't find anything, he'll expand to 40 or 50 yards. "If a dog is hunting going with the wind, he'll cast out further ahead of you, then turn and hunt into the wind," says Lance. It's instinctual and genetic. Many dogs don't do this as a result of poor breeding.

The pine-planted berm in the defunct Camp Kittatinny gives access for the hunt through wetlands.

We drive over to the Delaware Water Gap National Recreation Area (NRA) near long gone Camp Kittatinny. The dogs circle as usual on our way down to the lake. Soon, Pepe and Billie are on point in cherry and red osier dogwood. Lance releases the dogs, but neophyte Pepe won't go and Lance still doesn't quite believe him.

As we near, the bird flushes and flies. Lance fires twice and misses. He picks up the empty shells and checks his gun before we move on to where the bird settled in dense woods of pine and red maple. We crawl under low-lying branches and through colonies of shrub stems.

The bird flushes into the trees. Bushwhacking our way uphill through thorns and neck-high goldenrod, we hear the dogs' breath through the cover. Down over a carpet of golden leaves, the bird flushes and flies back from where it came. "That birdie eluded us again, guys," says Lance to the dogs as we retrace our steps along a deer path. Back at the van after four hours in the woods, he says to the dogs, "Grandpa missed two of them. Don't be mad at me. We'll try it again, ok guys?"

The next morning, we're back in the NRA. Lance whistles and points for the dogs to go into the brush to sniff for birds as we walk on a grassy lane toward an old apple tree in a meadow. Through old farm fields and over over-grown stone walls, under low-lying branches on a hilly deer trail we go.

Lance points out a deer laying in goldenrod about 20 feet away. Many people hunt from the road or a grassy lane and often for only an hour or so, he says. They don't venture into thickets and scale logs over waterways to explore new and hidden territory and never see the treasured wild vignettes deep in the woods. These are the things Lance loves and considers to be part of hunting--part of the wild landscape.

"It's not a 'put and take'--putting a bird in the bush from a pen and taking it. I love watching the dog doing his job in finding game--that one elusive little woodcock--it's an enjoyment. There's a bond between me and my dogs. I love to hunt and they love to do it. We're three on a team out there. It touches me in a special way because I truly love the dogs and appreciate how diligently and hard they work. They never quit. Their drive and desire is compatible to mine. I'm out there for hours. It's healthful and kept me in shape for all these thirty years now.

"I do want the bird as a final result. I'm out there to hunt. Whatever I shoot, I eat. I hunt for the sport of it as well as to enjoy cooking and eating what I shoot. I've been cooking game birds for thirty plus years now." Instead of eating chicken, Lance has a freezer full of quail, pheasant, woodcock and chukar.

"The dogs live to hunt. They love to please me. I take them hunting. It's in their genes, in their blood. We can't get enough."

Lance Casper has been training gun dogs for thirty years and hunting since he was eight. "They handed me a gun and a pocket full of shells. The first woodcock I got I chased him for a half day." One of the top gun dog trainers in the country, he owns Muddy Foot Farm in Montague, where he breeds German Shorthair Pointers and trains dogs. Billie and Pepe are both AKC Master Hunters. To be a Master Hunter, a dog must be steady to wing and shot, honor the other dog naturally, and retrieve and deliver to hand. (Honor: to see another dog on point, stop at a distance and remain on honor until the bird is shot, retrieved, and delivered to hand to the handler.) Pepe finished his Master at only 13 months old, instead of the usual 5 years.