Elixir of the Senses

New Jerseyans like drinking wine. As the fifth largest consumer of wine in the nation, we down 3.07 gallons per person every year. We're also fifth in making the elixir ­ a million gallons in 2003. In the Garden State, viticulture is the fastest growing kind of agriculture with 24 farm wineries that grow grapes and produce wine, plus over 50 vineyards that grow grapes and sell them to wineries. There are a few winemaking schools that only buy grapes from vineyards to make wine.

"We enjoy European and California wines, but recently the population is gaining a little taste for New Jersey wine and that's why the industry is growing," says Bill Sciarappa, Monmouth County agricultural agent at Rutgers Cooperative Extension. Sciarappa is responsible for specialty vegetables and small fruits.

More than half of New Jersey wineries grow all their own grapes, but in the Skylands region with its few brutal crop-killing winter days, winemakers prefer to not put all their vines in one basket. "We grow 40 to 50% of our own grapes and buy the rest from New Jersey or bordering states," says Matty Matarazzo, owner of Four Sisters Winery at Matarazzo Farms in Belvidere."In '94, we used about 90% of our own fruit for our own wine. We had a bad winter with temperatures down to 14 below for just a few days and it devastated our grapes. We thought they were cold hardy, but the temperatures exceeded the capacity of the grape varieties. It took ten years to get the vines back. Some never came back so we started buying grapes. We were intimidated. Grapes are a tremendous investment." Now they use mostly French/American hybrids ­ French vines grafted onto sturdy, native American rootstock.

There are hundreds of grape varieties, each acclimated to a specific area. Some are cold hardy or heat tolerant. Some are susceptible to summer disease. Rutgers Experiment Stations grow varieties side-by-side to see which are more suitable for each of the state's three agricultural regions. After all, Chardonnay grows in southern France but Reisling grows in the colder parts of Germany.

"We test these things out before growers grow them. Everybody's in love with Chardonnay, but they don't realize it doesn't grow here like it does in California," says Sciarappa. "The number of growing days is also a key factor as to what you can grow. Chardonnay takes a long time to mature. In North Jersey, the growing season is 180 days; in Cape May it's 220. That's where you should grow Chardonnay."

In Finesville, ALBA Vineyard's 15 acres of classic wine grapes, Vitis vinifera, and French/American hybrids are enough for 50% of the 16 wines they make. They buy 30% more from Jersey vineyards. They plan to plant 50 more acres in the next few years.

In winemaking, sugar is measured in "brix." The alcohol content becomes 50% of the brix, so if the brix measures 22, the wine will be 11% alcohol. Brix are measured on the grapes on the vine. "We know the alcohol content when we pick the grapes," says John Altmaier, ALBA's winemaker. ALBA hand-picks grapes from Labor Day to mid-October when frost ends the harvest.

At Grape Expectations wine school, as at most other wineries, the first process is to crush the grapes, then press them. White grape skins are immediately removed and the grapes are crushed and pressed the same day. Red grapes ferment in the skins for at least a week. "All grapes except one have green meat inside of them, so to get red wine you need a lot of tannin from the skins," says Jim Lowrey, who owns and runs the school with his wife Mary Ann.

It's all fruit or grapes that fill the stainless steel holding tanks ­ no water added. Water has no sugar content so there's nothing in it that would ferment. Fruit and grape concentrates do exist to add to the winemaking process, and sometimes another wine is added to acquire a particular flavor. Sometimes a small amount of liquid is necessary to dissolve the sugar that's added to a fruit wine or the honey added to meade (a honey-sweetened wine). Flower wine is an exception too. Because flowers contain very little liquid, they are brewed like a tea.

Grapes become wine when fermentation is complete. Sediment begins to fall from the brew to the bottom of the holding tank, a process that can take almost a year. Next, winemakers "rack" the wine ­ they siphon it off the sediments, transfer it to another tank, then discard the sediments (yeast, skins, fruit debris). This may occur several times, depending on the grapes and the fruit. Some wines sit on the sediments in oak barrels while ageing which increases a buttery texture. The longer it's kept in the holding tanks or barrels, the more character it acquires. At Westfall, red wines are barrel-aged ­ to impart oak flavor and softness ­ for 10 to 18 months, then tank-aged for three or four more. Whites are bottled when cold-stabilized and clear.

Ageing depends on the style of wine. During this process ALBA looks for criteria of stability including a completed fermentation and an absence of tartaric acid crystals. Grapes are high in it and when it combines with potassium, tartaric acid forms a salt ­ potassium bitartrate, a.k.a. cream of tartar. "I'd rather have it happen in a tank than in a bottle," says Altmaier. Chilling rids wine of the chemical. They often see it on the grapes on the vine. "When we pick grapes and it's cool out, it looks like latex paint."

As the wine begins to age, tannins and pigments bind together to make sediments that create a softer wine. When the liquid is finally clear, it's ready to be bottled. Whites and fruit wines with tartaric acid are bottled the youngest; fruit wines three to four months after fermentation, whites in six months, and reds from one to two years after fermentation

Wineries use varying degrees of sulfites and at different stages of production -- from adding it to the initial brew, to cleaning equipment and in tank vents. During the fermentation process, micro-organisms produce sulfites naturally, but they are also added in an artificial form to speed up the process or to allow the wine to store longer. Sulfites kill bacteria and prevent wine from turning to vinegar. The higher tannin wines require more time to reach their potential, and therefore require more sulfites. "A vintner ferments a wine to have a long shelf life," explains agricultural agent Sciarappa. "Generally, the white wines are meant to be young, and the reds get better with age. Each wine variety is meant for either a quick sell or a long-term investment." The problem is that many people are allergic to sulfites. "It's the dose of sulfites that's the culprit, rather than the chemical," he says of sulfite-sensitivity.

"If you have a wine you want to keep for 18 years, you add more sulfites to it, so when drinking it at a younger age you get hit with sulfites. Ten years later, most of it has dissipated. We make our wines to last three to five years so we can get away with lower levels," says Matarazzo. So if you have a slight sensitivity, go for an aged wine or a wine that's made to be consumed young. 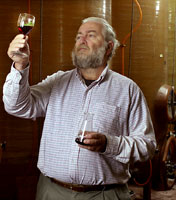 At Four Sisters, they know Sangria. "Get a good bottle of red or rose, a little on the sweet side, and add peaches, plums, grapes, cherries and pineapple. Or, make a good fruit juice and then add wine. Put fruits together. Blend some to make a puree but leave some whole fruit. Traditionally add brandy. Add sugar or honey for sweetness. Let it sit overnight in the fridge and drink it the next day. Strawberries are great for Sangria. Drop a strawberry into each glass and pour Sangria over it. Put a few pieces of fruit into a glass. In the rest of the Sangria, use a little pulp but no fruit. That fruit carries all the flavor of all the fruit from soaking overnight. That's the key ­ if on the spot, puree the fruit for immediate use. Spritzers ­ use tonic water or ginger ale. We don't encourage putting ice in anything with wine. As ice melts it dilutes the character and flavor, but for spritzers it's ok."

At Grape Expectations, the Lowreys specialize in making California wines. All the grapes come from California. "We begin ordering grapes at the end of August through early October," says Jim. "For those people who want to make wine but don't know anything about grapes, they can come to the school and have a tasting and decide which grapes they want to order." Classes begin in September/October with the crushing and pressing of grapes, then weeks later put into barrels to age and settle to make a clear wine. In January, it's racked and then bottled from May to July.

New Jersey's wine industry is in a growth state, says Matarazzo. "There are not enough grapes to support the wine industry. It costs between $8-12,000 to plant an acre, the cost of the vines, poles, wire, trellises. The $4,000 difference is the varieties. Some cost $1.50 to $5.50 a cane and we plant 800-900 an acre. Putting in each post and each vine is labor intensive. Labor costs about $3-4,000 an acre. And you don't harvest grapes for three years after you plant them."

And "No-alcohol" wine ­ ever hear of that? Yeast eats sugar and makes alcohol. The addition of high sulfites can kill yeast and prevent fermentation. This results in sweet red wine with no alcohol. To create an alcohol-free dry red, the wine is boiled to 170º to vaporize and trap the alcohol ­ the stuff of grappa and other goodies like Sambuca. What's left in the pot is wine; sans alcohol. "No-alcohol wine has gone through the fermentation process. Its tannins and acids combine to form new substances that make it taste like wine instead of just grape juice with a concentration of sulfites," says Sciarappa.

"We're also seeing a shift to red wine from white since the health aspects of red wine were determined from the French Paradox study. The main factor that protected the French's vascular systems are proanthocynadins ­ phytochemicals that circulate in the blood stream and stop the accumulation of cholesterol. It's not only in grapes, but in other colorful fruits. There are also antioxidants that stop cellular degradation from radicals that lead to ageing. In grapes, there are molecules that neutralize oxygen radicals. It seems to be that people who have drank a lot of wine or eaten a lot of colorful fruits and vegetables live longer," he says. Wine is a living thing.

This story was first published: Autumn, 2004