Guests In The Barnyard

Anyone who has traveled a country road in Northwestern New Jersey is familiar with stands abundant with an enormous variety of farm fresh produce. Many don't realize, however, that many farms welcome visitors into the fields beyond the roadside gate. In Sussex County, there is an active agritourism program to develop visitation at over 100 farms which provide a surprising range of products. The educational benefits to guests in the barnyard usually result in additional sales for the farmer and preservation of the long local agricultural tradition.

Since the economy of farming has changed, it's become necessary to reinvent what small-scale farms must do to thrive, and many have opened the barn doors to the public. "Agritourism" has taken root in Sussex County. Here are few farms to put on your list of Skylands destinations.

Get the Flash Player to see this player.

The Family Farm sits like a jewel in the Lafayette landscape ­ painted barns among rolling fields, white cows and tree-topped hills. This old dairy farm is a small piece of a seventh generation farm that's been in the family since 1845, and remains in the Farm Preservation Program today, with fields now leased to a dairy and crop farmer. In the fall, giant rolls of golden hay sit on hillsides in the setting sun.

Joan Smith, "Daughter of American Agriculture", maintains a tiny gem of a store that sells what she grows and makes herself. Fresh herbs cut from her garden ­ French tarragon, Greek oregano, parsley, sage, thyme, mixed herbs and big-fisted bunches of basil for a dollar. Bouquets of flowers are nothing new to farm stands, but bouquets with perennials like peonies -- and the annual sunflowers at three dollars ­ make the trip well worth it. Besides, a visitor gets to see this slice of country that most folks don't. She bottles herb vinegars and jams, jellies and pesto made from fruits that she either grows or picks at a pick-your-own farm or from friends' trees. People travel to the stand especially for her baked goods ­ home-made old-fashioned cookies. She says some of her most faithful customers are the locals who drive by to work and bicyclists who often stop for the cookies ­ the kinds Grandma used to make. The store is self-serve.

Down the winding roads that follow the Wisconsin Glacier's landforms, three other dairy farms await the visitor ­ each one with a twist. Head on over near Space Farms on Rt. 519. Just beyond is The Farmer's Wife & Windy Flat Dairy. Holly Sytsema is The Farmer's Wife and she operates a business of that very name. At the stand, she sells eggs ($1.75 a carton) from her 30 Rhode Island Reds ­ freshly gathered by six-year-old Will, the farmer's son, every day ­ plus jams and jellies made by her mom and her sister's friend ­ scrumptious kinds like lemon-blueberry, white cranberry and wild huckleberry, and homemade salad dressings like buttermilk ranch and Vidallia onion. For all kids great and small, she's got an old-fashioned candy store with candy necklaces and licorice pipes, home-made cookies and ice-tea and soda in hot weather. Where else can you grab a cold one on a country road? Cut-your-own flowers or buy a bunch, including a striking bouquet of gladiolus. And while you're there, pet the farm animals ­ goats, rabbits, sheep and calves.

Across from her stand, a sign announces Windy Flat Dairy as a Dairy of Distinction, an award from the State Department of Agriculture for five years running for keeping a well-maintained farm. The dairy offers a dairy tour for $4 a person, kids three-years and under are free. Visitors learn it all, from the stages of a cow's life-cycle to the modern milking process. In October, the tours go to hay with the learning focused on veggies and root crops and fall farm fun. Call ahead to reserve a tour for schools and families. Next time you pick up a carton of Parmalot, remember The Farmer's Wife.

Rosina Byma's greenhouse at By-Acres Dairy is crammed with the hot color of annuals and the scent of their perfume. Dragon Wing begonias spread their dark leaves under pink blossoms that bloom all summer. Petunias...gerbera...Peek-a-Boo.... a few herbs and perennials. Some are in unusual Queen Anne style wire planters, She'll be open through June, then reopen on Labor Day with pumpkins and mums. Ever wonder how much a gallon of milk weighs? 8.6 pounds, and Byma sells it by the 100-pounds. Ever wonder if all spots on a Holstein were the same? Know what a Holstein is? "Each cow has a different fingerprint," she says. Byma tells these and other interesting facts about cows and milk on dairy tours at this Holstein farm. Outside the big barns, calves are chained to houses where they're weaned from mama. The line-up in back of them munching at a trough of hay, are heifers and milk cows. The cows among the farm's 300 head are milked twice a day at 4am and 4pm, so families, schools and groups should schedule their tour to catch the milking. By-Acres sells milk to Dairy Lea co-op. 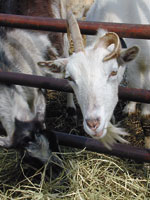 Goats of various hues, sheep, Guinea hens, chickens and roosters, and dogs and cats roam and graze on this small farm just north of the town of Sussex, off Route 23. There, owner Gail Fatum pasteurizes goat's milk and turns it into cheese, fudge, and fancy soap. Aged goat cheese, like feta and cheddar, and spreadable fresh cheese, plain or with herbs, fill the fridge. Fatum makes extra creamy chocolate fudge from the rich milk, and on rare occasions, cannolis. When Fatum's not saying cheese, she's milking goats ­ all 95 of them. Each one gives an average of 3 quarts daily when they let her. "Yesterday they were just fighting like kids in the rain when I was trying to milk," she says. "They're like children when it's nasty. They get bored." This is her second time around with the critters. She got into goats at age 10 in 4H and got a state-license to sell milk when she was only 12. She sold the goats, went to college, bought two houses and became a cabinet maker for 40 years. "One day I bought a farm. Then I had to put animals on it that I knew. Goats... they can drive you nuts and step on your toes but they're like dogs ­ they paw you and want to be petted. They like their heads and ears rubbed. They'll follow you around. Some days they don't want to be bothered but they're much more personable than sheep." Leave a check or cash in the can at the self-serve store at the farm. If you can't make it to Wantage, make time for her goat milk goodies at the Olde Lafayette Village and Morris Plains farm markets.

On the other side of Sussex town, Ted and Annemarie Stephens and their four kids run a 10-acre NOFA-certified organic farm, located on a Wantage hillside overlooking the Great Vernon Valley. The Appalachian Trail runs alongside the farm, which is situated in the center of a 150-acre plot owned by the National Park Service. Pine barns over 200 years old stand among the chickens, organically-raised pigs, cats and dogs, and Fred, the steer. He once was dairy but now he's beef, was small but now he's big.

Vegetable patches, greenhouse and small market mark the property as business. Stephens has lettuce and other greens, chard, kale, peppers, squash, broccoli, cauliflower and annual herbs. Specialties include heirloom tomatoes, jalapenos, patty pan squash and melons ­ "if it's a good melon year," he says. You'll know if it's hot and dry. You'll find fresh organic eggs here laid by the mixed-breed free-range chickens. There are very wooly sheep to look at. "I like them. They're fun. They're so peaceful. They were a present for Annemarie," says Ted Stephens. Pigs may be "obnoxious," but there's a waiting list for the organic pork and bacon that Stephens's raising. He ships the meat south to the only federally-inspected, organically-certified butchering facility in Jersey. Stephens also has chicken and turkey, but buyers must call for availability. Annemarie also runs an organic bulk buying club. "Pretend you're in a supermarket in a catalog," she says. So take a ride with some of the best views in New Jersey and pull in at the big sign on Route 284 just a skip before the New York border. Drive in, look around, and somebody will find you ­ perhaps the wild/domestic-cross tom turkey.

This 60 acre farm, located in Andover and Fredon Townships, is operated by its owners Carla and Michael Kostelnik. The primary focus here is sheep; however, hay is also produced on the acreage for use on the farm. Sheep and wool products are for sale to the public.

As in many cases, this farm's name has a rich history. The Brickyard Farm was actually a working brickyard in the 1830s. The Kostelnik family has called this home since 1972 when they began their sheep operation with 6 ewes. Their limited farming experience prior to this was in suburban Massachusetts where Carla was introduced to sheep shearing. She was happy to find that here in Northern New Jersey, the land lent itself to sheep. soon their children were also involved in 4H and showing their sheep at the Sussex County Farm and Horse Show.

The current operation is home to approximately 45 sheep, including 1 or 2 rams for breeding purposes. The sheep are breed for wool and meat quality. Lambing season runs from the end of December to late March. Some sheep operations will actually breed twice a year in order to provide lamb for Easter and Christmas. In Sussex County, there is a word of mouth network among sheep breeders for the lamb meat market.

Shearing occurs once a year in the springtime. The fleece is then hand washed in warm water and soap, cared and spun and some of it is dyed. Fleece is available at the farm in three colors - white, black and gray. Carla sells hand knitted, hand woven and hand dyed products at craft shows. Fleeces are also sold directly to customers and cost approximately $10 each. People who want to spin their own wool purchase them or they can be used for stuffing pillows and for a variety of craft projects. Tanned sheepskins are also for sale - their prices range from $30 to $50 each.

For further information on Brickyard Farm, including public visitation and sales, please contact Carla Kostelnik at 973--383-4028.

This story was first published: Summer, 2004