Chris Schaefer, Steve Noll and Mike Rassweiler are farmers in Hunterdon County. They are as different from each other as three farmers can be ­ and as different from a non-farmer's stereotype of farmers as they can be. But they have this in common: They love their work, and their work is never-ending. Talk to any of them for long, and you find out that when a farmer is awake, he's at work.

And their work is changing. All of them are involved, for different reasons and in different ways, in agri-tourism.

Agri-tourism, the combination of agriculture and tourism, is not new. When city people first began to take vacations in the country, and the local farmers started consciously catering to them, agri-tourism was born. But it had a long infancy, during which it became harder to make a living farming, and fewer people farmed. There are several definitions of agri-tourism, but in general, it seeks to attract non-farmers to farms so that they can re-attach themselves to the natural world and give farmers an extra incentive to stay on the land.

This can mean anything from running a retail farm stand and a pick-your-own operation to finding new, tourist-oriented uses for traditional crops, according to Katherine Adam, program manager for Appropriate Technology Transfer for Rural Areas, a non-profit clearinghouse for information about agri-tourism and other alternative forms of agriculture. Adam, who is based on the campus of the University of Arkansas at Fayetteville, tells of farmers in the Midwest who, instead of plowing their field corn stalks under after harvest, have left them standing in the form of mazes. Tourists pay them to run through the mazes, get lost, and find their way out. Then there's that whole massage-and-margarita thing.

"There's a town on the Olympic Peninsula in Washington that has a great climate for growing lavender, and there are 10 or 15 farms growing big fields of lavender there," Adam says. "One of them will let you come out, and, for a fee, give you a massage in lavender oil while you drink a lavender margarita." 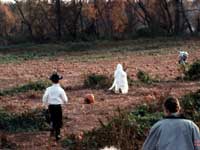 Chris Schaefer doesn't do massages, but he has transformed the diary farm his family purchased in 1949 into a destination for families and school groups. "It is amazing to see the expression on the children's faces when they see green grass. Some have never seen grass before or a cow!" he says. 4,000 children from schools all over the northern New Jersey area, including the inner city, visit Schaefer Farms in October each year, to explore the pumpkin fields, take a hayride, and discover the petting zoo.

According to Chris, his family slowly changed over from cows to vegetables, first opening a farm stand, then pumpkins, and hayrides twelve years ago. More people kept coming each year and their operation grew bigger and bigger. Chris and his brother Bill formed a partnership in 1991, and the family-- parents, wives, and five children all work the farm. Chris met his wife in 1997 when she worked at the haunted hayride as a witch, and they agree that the farm's a great place for children to grow-up. Chris adds, "I put the kids to work all over the place and they love it."

Today, on Schaefer Farms' 200 acres visitors can pick their own blueberries and blackberries in the summer, and in the fall go on a hayride to the pumpkin fields, explore a corn maze, eat lots of good food, purchase fresh farm produce, see live farm animals in an extensive petting zoo, and be entertained on a haunted hayride, which Chris claims gets scarier as the season continues. Their operation continues to grow, and a haunted house is scheduled to open in 2002.

Feed the Goats, or Just Chill

Drive north from Lambertville, up Route 202 to Route 523, and then north on 523 through the hamlet of Sergeantsville, and slow down as the rest of the traffic speeds up. On your right you'll find an old, red shed and a small sign advertising fresh produce. Turn in, and you'll find a farmhouse, a big, old red barn, some vintage cars in various stages of mechanical undress, and, improbably, a large swimming pool and tennis court. You've arrived at Silver Maple Farm.

"Sure, I can talk, but you've got to come with me while I feed the goats," says Steve Noll, who, with Bill Hawley, owns and manages the farm. He leads you into the barn, where most of the two dozen goats are gathered. The goats are friendly, but they have a flexible conception of the edible, which may expand to include notebooks, pens, and cell phones. Noll feeds them what looks like milk from a large container, and explains Silver Maple's proposition.

"We grow our own vegetables and fruits on 20 acres," he says. "We have about two dozen goats, and also pigs and chickens. The farm house ­ the original building dates from the early 1800s ­ has five guest rooms, and we welcome guests all year round."

Just as Noll finishes, there is an apocalyptic squawking, and Bill Hawley makes his appearance, trailing chicken feed, and what looks to a city kid like all the chickens in the universe. Noll explains that this is a working farm, and a working bed-and-breakfast, and that he and Hawley are equally dedicated to both. Their farm is for real, not just for show, and Noll and Hawley sell their organically grown produce to their neighbors, to the kind of day-trippers who buy Chris Schaefer's produce, and to restaurants as far away as Lambertville and New Hope, Pa. But the farm experience ­ as much or as little of it as a visitor wants ­ is also a major product for them.

"Lots of B&Bs don't allow kids, or pets," he says. "We allow kids and pets. We want people to experience the farm ­ if they want to, that is. We have people who come and help feed the goats and the chickens, and who help harvest our vegetables, but we also have people who just come and do nothing but sit by the pool." Noll gestures toward the pool in a way that suggests that he doesn't sit by the pool much himself.

Silver Maple's produce is all organic ­ which is to say, it's grown without pesticides or chemical fertilizers. He and Hawley advertise their produce and inn with a little, hand-lettered sign that a passerby on Route 523 might see if he were looking for it.

The farmhouse has five guest rooms, and it's also home to Noll and Hawley. It is cozy and comfortable, but it's not chi-chi, by any stretch. "We're not Victorian," Noll says, gesturing around a perfectly serviceable but rather small kitchen. "We don't have priceless vases that you can't touch or furniture you can't sit on. This is our home."

When he and Hawley finish their day and drop, exhausted, on their sofa, they may very well be joined by a guest's child who demands to be read a story, and that's just fine with Noll and Hawley. "Kids are great," Noll says. "They find themselves in a home, and they don't know that it's any different from any other home they've found themselves in, so they come and talk to us just as they would any other adults in a home they were visiting."

They've been at this for four years and hope to make money at it someday; for now, Hawley helps support the operation with his day job as a magazine editor. Strangely, it was he, and not Noll, whose idea the farm was. "I interned on a farm in upstate New York," he says. "I always wanted to go back to it."

Noll was a florist who also restored antique cars ­ which explains the wheeled monuments in his barnyard ­ and would not, on his own, have considered spending his days up to his ears in goats and chickens. But he's happy with the choice. "I'm doing something that really matters," he says. "I get to meet lots of interesting people, and no two days are ever the same."

Welcome In ­ on Wednesdays and Saturdays

Not far from the Silver Maple Farm is the North Slope Farm, whose lord, master, chief cook and chicken plucker is Mike Rassweiler. He has no website and does no advertising. He welcomes visitors to his 50 acres on Rock Road East in West Amwell Township on Wednesdays and Saturdays. North Slope welcomes tourism, but it isn't about tourism; it's about growing food for the community.

Rassweiler, a Princeton native, said he was first drawn to agriculture as a geography student at the University of Colorado. "That was when I first became aware of some of the world's serious problems," he says. "Well, I was aware before, I guess. But that was when I first began to realize how big an impact each of us has, personally, on those problems."

As Rassweiler talks, he works. He washes eggs, sets up displays of freshly harvested beets, and never really stops moving or working for long. "The farm is all-consuming," he says.

This story was first published: Autumn, 2002