Some New Jersey farms have undergone fundamental changes. Where cows once grazed, mystery creatures occupy the fields. Most serve two purposes: to educate and propagate. If curiosity leads to profits, all the better. The result? New Jersey farms have become the latest melting pot - the landing place of the Ark.

A Pack of Alpacas 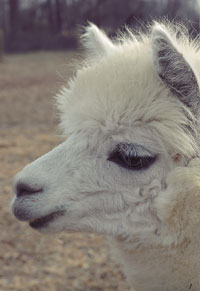 Her arms filled with hay, Debra Lamar walks through the barn at Bella Cria Alpacas. Shaggy, long-necked animals jostle for food. The shiest crane their necks to check out the humans. The size of apricots, their enormous eyes peer out from under bushy mops of hair.

Reassured, the alpacas grab hay from Gabrielle Lamar and gently sniff the small girl's straw-colored hair. If Debra and her husband Derek Lamar have their way, more children will enjoy these oddly graceful creatures from South America, and their Pittstown farm will become the center of a Hunterdon County 4-H Alpaca club. "I've sent out a call for members," Debra explains. "Three have signed up. We need just a few more for a club."

All parties benefit. While the alpacas learn trust, their handlers learn to unwind around creatures who, encased in soft, dense hair, feel like pillows on four legs. First, however, visitors must learn not to panic when confronted by this intense member of the camel family. Debra quickly reassures newcomers: "They only spit at each other, when they're feeding or competing for females. It's pretty much alpaca to alpaca." Within minutes, in fact, a large male spews partially digested pasture at a pushy youngster. As Debra tactfully phrases it, the spit "has a unique odor."

Unique and prized. If a female spits at a male during breeding season, she is either unimpressed or ­ hopefully ­ already pregnant. "Alpaca breeders call that spit the Smell of Money," Debra says. She should know; the Lamars expect four baby alpacas over the spring and summer. 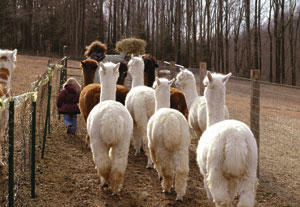 The money can be substantial. An alpaca gelding might go for $800, but a good breeding female can cost tens of thousands of dollars. (Billy Wagner of the NY Mets sold an alpaca for $100,000.) It's a long-term investment: in the enormous herds of Peru, Chile, Bolivia and Ecuador, alpacas live approximately 16-18 years. "We hope they'll survive longer here," Debra says. "There is less stress, and we can provide veterinary care."

The Lamars have learned to manage alpaca stress well. They shear in early May. In the summer the alpacas need fans in the barn, but New Jersey's climate agrees with the wooly canids, who grow dense coats over the winter.

"Don't call it wool," Debra cautions. "Alpaca fiber has microscopic scales that lie flat, unlike wool, and don't itch. The fiber, unlike wool, doesn't have lanolin, which is full of bacteria." The fiber is also delightfully soft and warm. She proves her point with a pair of thick, warm Alpaca socks. Getting those socks can only be called a labor of love.

Handlers don't brush their animals; they pick the hay from the coats to avoid changing the structure of the fiber. After shearing, the raw fiber must be picked through again to remove all debris. Then a small quantity is carefully arranged in a 3-5 pound bag ­ preferably a pinned lingerie bag ­ so it won't compact in hot water and turn to felt. After hand washing the fiber is laid flat to dry.

Next, the fiber is straightened and untangled by hand or long-tooth combs or drum cards. The process proved so tedious that Debra now sends the fiber to a mill where it is washed, cleaned and carded. Only then can the product, called a clean roving, be spun. "I don't dye my wool." Debra holds out a basket of russet red, black, and off-white yarn spun on her own wheel. "I work with the natural colors of the animals."

Producing yarn is not a requirement for the club. Instead 4-H Kids will learn day-to-day care, performing such tasks as trimming the two big v-shaped nails on the alpacas' padded feet.

As much a herd creature as her animals, Debra hopes 4-H club members will travel with her family to events such as the Warren County Fair, the East Meets West Alpaca Auction in Boonton, and the Alpaca Budget Caper Show in Maryland on April 9th.

"I go to the Bare Naked Alpaca Halter Show in Columbus, on June 3rd," Debra says. "The alpacas are shorn. The judges look for good confirmation and temperament."

The Bare Naked Show best summarizes the goals of the New Jersey alpaca community. Learn, educate and breed with a plan. Avoid creating confirmation flaws that can handicap future generations ­ and at the same time, have fun.

Over in Milford, Dirk Milz keeps a neat farm. A small herd of Scottish Highland Longhorns graze in a pasture flanked by a long drive and an orderly row of trees. A carefully spaced row of shed antlers hangs from a fence by the parking area.

Clad in green coveralls, Dirk Milz escorts guests to an office he shares with a pot-bellied pig and a friendly cat. Even the clutter ­ ribbons, toy llamas, various certificates and assorted knickknacks ­ is carefully ordered. Great discipline is perhaps the only way to handle the dizzying variety of creatures at Edelweiss Farm, from its largest bovines to the fish in the koi pond. Dirk ­ who had only a dog in his native Germany ­ makes the evolution of the farm sound deceptively simple: "Our children started with 4-H. We had sheep. The kids grew up and got married. I got into exotics."

He holds out the farm's picture book, which serves as a visual narrative of years he and his wife Pat spent with odd and unlikely animals. Dirk points to a photo of a small, furry, gold-brown creature with a long tail. "That is a kinkajou. I bought it in Florida. They come from South America. It's nocturnal. It sleeps all day long. It was boring. I got rid of it."

A glance around the office reveals a startling omission; despite the size of the operation, Dirk manages without a computer. "I keep my books by hand," Dirk says. "That way I always know where the information is in case the USDA makes a surprise inspection."

The logistics are daunting. Every animal comes from licensed breeders scattered around the country. Both the United States Department of Agriculture and the State of New Jersey require exhibitor licenses. The medical care is constant: Dirk vaccinates each animal. The reindeer get wormed four times a year. Different species require different fences, cages and feed programs. Not surprisingly, Dirk's workday begins before 7:00 a.m. And yet he found the time to decorate the barn with handmade lattice-work. Noah would have liked this man.

On a tour of the farm, Dirk stops by a pen of pregnant Sicilian miniature donkeys. Their nine babies will eventually be sold. The ones that stay go to various festivals and shows; in the winter they add life to manger displays.

Dirk ambles past stacks of neatly baled hay to the llama field. "I expect fourteen newborn llamas this year," Dirk says. Those babies will be sold as well. He clearly enjoys the adults, enormous beasts with shaggy ropes of fiber that swing like dreadlocks from their sides. Several llamas have names that evoke Dirk's past: Reinlander, Fraulein.

Then it's on to the reindeer enclosure. The iconic image of reindeer pulling Santa's sleigh skews expectations. The small reindeer don't pull sleds. Nonetheless, in December of 2005 Dirk's reindeer went to 18 functions and led the Clinton Christmas parade. In the spring, when they shed out, the reindeer look rather moth-eaten. Dirk fills buckets with fur that he gives away, along with the llama fiber. When the temperature drops, the reindeer revert to the belles of the ball.

Everywhere babies are pending, or just arrived. In a warm pen two wallabies, kangaroo-like creatures, nibble on alfalfa hay. One carries a baby in her pouch. Dirk checks on his coatimundis ­raccoonish animals ­ and a pair of South African porcupines. (The only truly pungent spot on the farm, the room's musky odor could knock out a prizefighter.) The black and white porcupines bristle aggressively, puffing up like blowfish. Chortling with greed, they rip apart the bananas Dirk tossed into the cage. "She'd better be pregnant," Dirk says. "I have the male for a reason."

Dirk recognizes curiosity, and talks easily about his animals. The bulk of his business deals with people who want to board, breed or buy a particular species. But he likes to show them off. The animals often go to children's educational programs. At the thought, Dirk sounds like a chef planning a smorgasbord: a little fennel fox, a helping of reindeer, an aside of baby llama. Perhaps a yak or two. 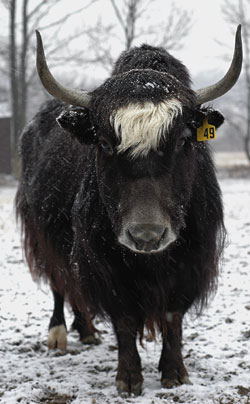 Yes, yaks, The domesticated descendant of the enormous, hairy, wild yak from Asia. Shaggy and sporting a large hump over its shoulder, the yak still bears some physical resemblance to its wild cousin. In Asia, domestic yaks serve as all purpose vehicles, pulling carts and carrying passengers. Locals breed them for their wool, low-fat meat, and milk, which is consumed or converted to butter, yogurt and cheese.

Dirk likes them for simpler reasons: they're smart, easy to fence, and cheaper to feed. They shed their warm, soft wool once a year; Yak farmers out west claim that ready-to-spin yak wool sells for $4 an ounce. A good yak can produce two to three pounds of wool, and pay for most of its feed.

Dirk Milz doesn't care about $4-an-ounce wool. Neither does he want to saddle up a yak for a ride. He enjoys the animals for their behavior, their grace, their beauty, their comic relief ­ and their profits.

The animals come and go. Each new species presents a learning curve: that is precisely why Dirk enjoys his business. As for what might be at the farm next year ­ or next month, he says: "You never know."

A Jurassic Park fence provides the first clue. Utility poles, spaced every ten feet, support eleven strands of electric wire. Once the herd ambles into view, the need for the posts at Readington Farm becomes clear.

Buffalo graze in the front field. Big, wild buffalo. Eric Doyle warns visitors to distrust the animals' calm appearance: "They can be dangerous. I take my old Grand Cherokee in the paddocks. I go in on foot only if the buffalo are in another field." He repairs fences when the herd is well off in the distance.

The Doyles did not always keep buffalo. The family once had a 100-acre cattle farm in Bedminster. Eric's father, Gerald Doyle, bought Readington Farm in the mid '90s. Without a trace of irony, Eric describes it as "Dad's retirement project." The retirement project meant shipping in buffalo from Indiana and a bull from South Dakota.

The "project" entails paperwork. The Department of Agriculture requires licenses for the scale, for food handling, for ownership, and a stamp for a non-amenable species. Since the buffalo qualify as exotics, New Jersey requires still more paperwork.

The farm needs stamps ­ and manpower. The Doyles have found help for the annual spring roundup, when veterinarians, Rutgers volunteers, and friends drive the animals into various pens. The animals eventually get weighed and vaccinated. It's no small feat; the biggest buffalo can weigh just under one ton.