Story and photos by Melinda Nye

A small, bristly caterpillar crawls across the oak leaf. Barely visible when it first hatches, the caterpillar will pass through several growth stages, or instars, as the spring progresses. Eventually it will reach almost two inches in length, morphing into the kind of larva that fascinates small children. Pairs of blue and red dots, like candy buttons, decorate its back. Thick, stiff hairs sprout like a fright wig from its body.

"Kids love the bugs. The freakier the better," says Michael Pollock, a geologist and life-time naturalist at the New Jersey Audubon Scherman-Hoffman Wildlife Sanctuary in Bernardsville. "We just don't want them to love that one."

That fuzzy caterpillar is the offspring of the Gypsy Moth, and the cause of despair for New Jersey gardeners, foresters, and agriculturalists. If New Jersey's environmentalists could rewrite history, the Gypsy Moth, like many of the bio-invaders of the garden state, would never have found its way to North America ­ and the agent of its arrival, an amateur entomologist, E. Leopold Trouvelot, would not be known as the delivery mechanism of an arboreal disaster.

No doubt Trouvelot meant well. Native silk spinning moths had proven susceptible to disease, and, hoping to create a hardy, disease-resistant hybrid, he returned from a trip to France in the late 1860s with gypsy moth egg masses. The experiment took a catastrophic turn when caterpillars escaped his Massachusetts home. Instead of creating a benevolent, masterful producer of silk, Trouvelot gave North America a tiny but voracious monster. The moths spread; over time they would defoliate millions of acres of northeastern trees. The moth's last big population cycle in 1990 resulted in the defoliation of more than 431,000 acres statewide. According to New Jersey's Department of Environmental Protection, almost 141,000 acres were defoliated in 2001.

The Gypsy Moth is hardly the only invader to reach New Jersey. Some took the direct route overseas; others spilled over from neighboring states. Crawling, sprouting, swimming, flying: the interlopers are here because, one way or another, our species brought them. Trouvelot will never lack company in an Environmental Hall of Shame. Among the individuals who single-handedly brought bio-pollution to our shores, a 19th century Shakespeare fanatic deserves a place next to the French entomologist.

In the 1890s, unconcerned about the possible effect on local avian populations, Eugene Scheiffelin released one hundred European Starlings in Central Park. Apparently, Scheiffelin wanted to introduce all the birds in Shakespeare's works to North America. The introduction proved fruitful. Aggressively prolific, European Starling flourished at the expense of native woodpeckers, great-crested flycatchers, common flickers, bluebirds and other cavity-nesting species, whose nests it often appropriates. 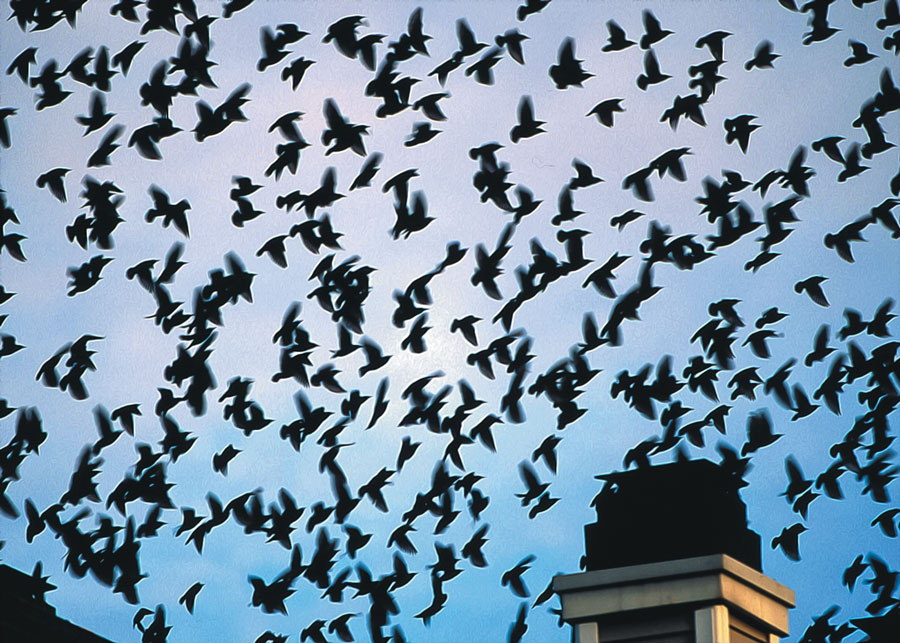 According to The Nature Conservancy, "some 4,000 species of non-indigenous plants and at least 2,300 species of nonnative animals now live in the United States." Non-natives have become another form of pollution, a biological contaminant in the Garden State, the intruders threatening native species in our waters, fields and forests.

How obvious is their presence? Take a walk through the spring woods. A Scavenger Hunt in northern New Jersey turns up a Who's Who of infamous, alien flora and fauna. Each species offers a lesson in the far-reaching consequence of ignorance, accident, and ambition.

Canada Thistle, a tough, spiny, perennial herb from southeastern Eurasia, arrived in North America in the 18th Century. Presumably carried in crop seed, its perseverance contributes to reduced agricultural yields; it also plays host to insect and organisms that attack various crops. Its arrival laid the groundwork for the noxious weed law in place today: the Canada Thistle Law of the early 1900s allowed concerned citizens to remove the weed from any property without being held liable for trespassing.

Offering sustenance to bees and butterflies and little else, Purple Loosestrife, an herbal import from Europe, turns freshwater marshes into monocultures. Once used as an astringent and styptic and a treatment for diarrhea, loosestrife is now considered another noxious weed. Efforts towards eradication are often fruitless. Introducing European beetles that feed exclusively on this plant may prove the best defense.

A white, fuzzy blot on a hemlock might be a Hemlock Wooly Adelgid egg sac. An aphid-like insect from Japan that arrived in the twentieth century, the adelgid kills existing needles and prevents new growth. Ninety percent of New Jersey's hemlock forests have been affected, suffering differing amounts of foliation. If untreated, the hemlock's demise is almost inevitable, often within four years. The HWA carries the potential for catastrophic damage to New Jersey hemlock forests.

One menace is still somewhat contained; the recent discovery in Jersey City of the Asian Longhorned Beetle prompted USDA coordinated survey, quarantine, and removal efforts. The beauty of a glossy beetle with oversized black and white antenna hasn't stopped its treatment as a public enemy. The ALB larvae (brought over in packing material from China) consumes the insides of a tree, causing it to weaken and die. Preventing further spread of the beetles means destroying the host tree­often a New Jersey maple.

The greatest threats often fly in under the radar. As was the case with the Hemlock Wooly Adelgid, the risk is unknown until the aliens are established and virtually impossible to eliminate. In spring, as trees leaf out, many hikers enjoy vistas through open forests, unaware that the absence of a tangled understory means something is amiss. That open, unobstructed view through the trees could be a clue that a small creature lurks in the soil­a creature whose effect continues to be misunderstood.

Common wisdom regarding the evolutionary history and role of earthworms ­ indigenous and good for the soil ­ borders on dogma. The truth is more complicated.

Native earthworms died off during the last glacial cold to spread across the region. Subsequent forests developed without earthworms, evolving in low-nutrient, high-acid soils. Earthworms arrived only with the Europeans, possibly in soil used for ship ballast. Later they showed up as fishing bait and part of gardening compost kits. Earthworms consume decomposing plant litter and turn over organic matter, aerating and breaking down and loosening the soil. Gardens benefit from the activity, but woodlands suffer when fundamental changes occur in the structure, biology, and chemistry of the forest floor.

The damage works its way up the food chain. Tiny insects and arthropods suffer from a stressed habitat. As Don Freiday, Director at the Scherman-Hoffman Wildlife Sanctuary, explains it, "then salamander populations decline from the loss of a food source. The decline in salamanders affects the predators such as the snakes and birds that feed on them."

It gets worse. Native plant species, unable to adapt, die out, allowing non-native plants to gain a foothold. Gardeners seeking tough ground cover for a shady, not particularly fertile patch of ground often walk out of their local nursery with an import. "Nurseries sell the exotics on the basis that no money can be made selling native plants," Mr. Pollock says, "A hardy, non-native cover, like Japanese Barberry, is highly adaptable. It's also an invasive."

New Jersey habitats become an ever-shifting mosaic as new arrivals displace natives, and invaders ease the way for yet more invaders. In disturbed, fragmented habitats, non-natives follow one another piggyback, sometimes creating a super abundance of food. In this situation, even natives become pests.

"Yes, the earthworms are a problem," says John Keator, Superintendent of High Point State Park. "But so are the white-tailed deer. They strip the understory of cover and eat the seedlings of native plants. Gardeners plant deer-proof or deer-resistant exotics, which spread into our parks. We've lost hundreds of acres of under story to Japanese Barberry."

All too aware of the threats, the New Jersey Department of Environmental Protection has embarked on a campaign of public awareness through education and legal enforcement, creating identification, control and eradication programs to protect the natives. State laws created stringent ownership requirements for any animal on New Jersey's Potentially Dangerous Species List. Handlers must prove their extensive experience in maintaining, handling, and caring for the species; they must have an escape proof-housing facility that prevents public access to and contact with the animal. The animals cannot be kept as pets; listed species are permitted in commercial premises only under special circumstances­and with permits. Fines range from $50 to $5,000. Each day that passes without remediation creates a separate offense.

What makes the list? New Jersey defines Potentially Dangerous Species as "any exotic mammals, birds, reptiles or amphibians, or nongame species which, in the opinion of the Division, is capable of inflicting serious or fatal injuries or which has the potential to become an agricultural pest, or a menace to the public health, or indigenous wildlife populations." The list includes primates, non-domestic cats and dogs, bears, a number of reptiles, a conure, and some parakeets.

How dangerous is a small, tropical bird? Native to South America, Monk Parakeets are dietary generalists, consuming seeds, fruits, and larva. Their diet is not the problem. "It's their nesting behavior. They qualify as a serious nuisance," explains Mr. David Womer, of Back to Nature, Inc. "Monk Parakeets build enormous stick nests, often on power lines and light poles. And don't think they're not out there. I was birding at Chimney Rock when two Monk Parakeets flew by. I couldn't believe my eyes. We know they're established in New York. I didn't expect to see any off Route 22."

Mr. Womer's experiences as a New Jersey naturalist makes it clear that the DEP's message has not reached all corners of the state.

"I've seen some strange things from the pet trade," he recalls. "Somebody released an iguana near the Lord Stirling Environmental Center. Unlike the parakeets, it wasn't a risk to the habitat. It would have died in the cold." 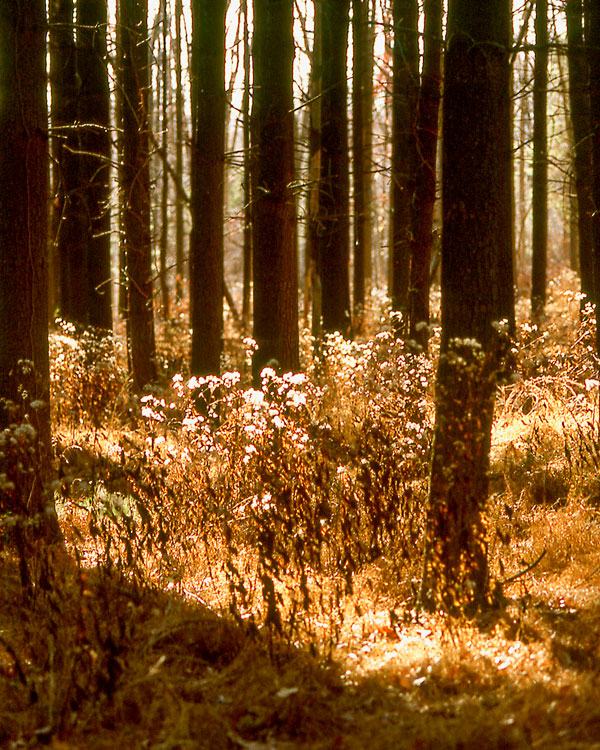 A lack of diversity on this forest floor
could signal invasives.

We introduce newcomers and incur extraordinary costs in eradication efforts; we push out natives and spend fortunes reintroducing them. We turn to other non-native species to control the invasives; the best defense against the Hemlock Wooly Adelgid might be a Japanese ladybug. We are engaged in an environmental arms race in a world where global trade and porous borders hasten extinction events.

Perhaps the best lesson comes from playing a different kind of Scavenger Hunt. Find the natives: a healthy, eastern flowering dogwood not under attack by anthracnose; Eastern Painted Turtles not competing with the Redeared Slider; Purple Martins nesting in peace. Admire a forest of spicebush, cranberry vibernum seedlings and sapling of oak, ash, hickory, among shrubs and vines ­ native spicebush, cranberry vibernum, herbs and ferns ­ ground cover. Listen for the tap of a woodpecker, the sound of a chipmunk in the groundcover. Watch for butterflies, hawks, or rattlesnakes exploiting their niches and interacting in a healthy environment. Look for nesting ducks in a pond or marsh without Canadian Geese. Take in the sights, smells, and sounds of spring.

Learn to appreciate the healthy remnants of our state.

There is always more than can be done. If you recognize rare plant and animal species, help New Jersey’s Natural Heritage Program. Information compiled in the Program’s database tracks the status of New Jersey’s natural communities, as well as its endangered or threatened flora and fauna. From there, the DEP can develop conservation strategies.
“ Don’t stop there. Remember to plant native species; they’re part of an ecosystem that began to evolve over 10,000 years ago,” Don Freiday suggests. “The reasons are practical, not just aesthetic. Learn what’s out there. We need to maintain a balance for healthy woods and watersheds.”
And if you see something that looks like it doesn’t belong in our woods, you might be right. Note the location. It can’t hurt to look up the DEP or your local conservation society, and make a report.
NJ DIVISION OF PARKS AND FORESTRY
NJ DIVISION OF FISH AND WILDLIFE
THE NATURAL HISTORY DATABASE (for NJ)
Department of Environmental Protection
P.O. Box 402, Trenton, NJ 08625-0402
USDA (Department of Agriculture) Forest Service

This story was first published: Spring, 2004