Story and photos by Michael and Michelle Mykowski

During the winter months fewer people venture outside to explore the forests. The beautiful flowers and foliage are gone, songbirds have migrated, and many of the animals are less active. It seems as if the woods are empty. What many people don't realize is that this season opens up a whole new opportunity for the nature lover. Since the canopy of leaves is gone, there is visibility for spotting owls.

With a little research and a lot of looking you can greatly improve your chances of seeing an owl.The first thing you need to do is read about them and learn about the many different varieties in our area. New Jersey hosts eight different species of owls. Because the state is in the migratory flight zone, some owls only spend the winter here, while others are year round residents. The most common types in the northern parts of the state are the Screech, Great Horned and Barred. Understanding each owl's specific habitat is key in knowing where to look. 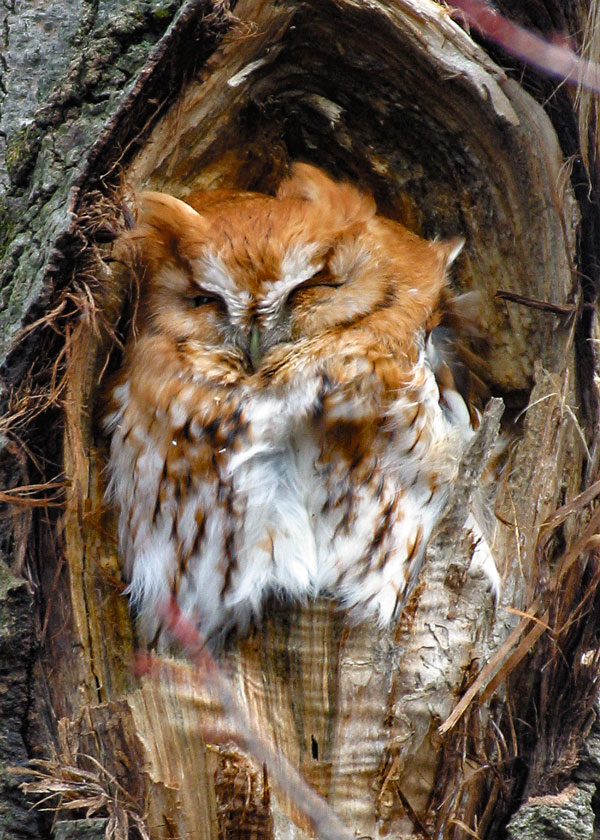 Screech owls are probably the most visible in our area. They are widespread throughout the state, residing in farmlands, old orchards, deciduous woods and suburban areas. There are two different color forms of this species, red and gray. Each color phase is independent of sex or age. They can often be seen in natural cavities in trees, old woodpecker holes, and duck boxes where they roost or nest.

The Great Horned shares a similar habitat with that of the Screech. They are remarkably adaptable, residing almost everywhere from the deep forests to the suburbs. Although this owl is large and abundant, it is still often difficult to spot. However, there are clues to help locate them. For example, look for whitewash, which is dried, whitish excrement on the branches and trunks of trees. Another thing to look for are pellets: small cigar-shaped clumps containing fur and small bones, things that an owl cannot digest and so are regurgitated. These can often be found at the base of trees, which is a good sign that an owl frequents the area. The easiest way to spot a Great Horned is to witness something called mobbing. This is when birds, like crows or bluejays, harass an owl by diving at it while calling loudly and trying to force it to leave the area. Looking in the general direction of the commotion will possibly lead you to the owl. 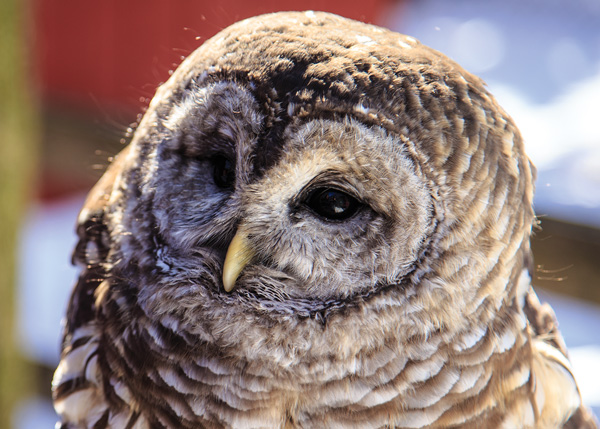 Vilma, a barred owl found by the side of the road when she was a year old, had a compound fracture of the left wing has no sustainable flight. She resides at The Raptor Trust in Millington.

Barred owls prefer thick, swampy woodlands, such as the Great Swamp, and are one of the most vocal owls. During the mating season, in March, it is not uncommon to hear them calling in the middle of the day. The distinct eight-hoot call can lead you to their location. Look for abandoned nests of crows or hawks, and cavities in large trees. The owls may be nesting or roosting in those locations. Also, larger owls such as the Barred and Great Horned can sometimes be spotted by their silhouette.

Once you locate an owl there are a few things to remember. Be careful not to disturb it. Limit the length of time and amount of visits and enjoy the owl from a distance by using binoculars, a spotting scope or a camera. Remember, even though it's cold outside and the woodland areas seem barren, there is still plenty of potential for viewing wildlife.

A few good books to read are New Jersey's Owls by Len Soucy (The Raptor Trust), How To Spot An Owl, by Clay and Patricia Sutton; Owls, Their Life and Behavior, by Julio de la Torre; and Bird Behavior, Volume 3, by Donald and Lillian Stokes.

This story was first published: Winter, 1998