Story and Photos by Donna Traylor

If our late-fall feathered friends are any indication of the upcoming winter, it might be a good idea to put an extra log on the fire and stock up on the hot chocolate - it could be a long one! People have all kinds of special indicators to clue them in on the changing seasons, especially winter, like thickness of onion skins or stripes on a wooly bear caterpillar. I check out the birds at my feeders and their arrival dates. Some avian species are considered "irruptive"­birds that are normally found north of New Jersey except in those years when cold temperatures and lack of food force them into our warmer climes. These cycles, which occur every five-or-so years, are a delight for Jersey birders. Let's take a look at those feeder birds starting to make their winter appearances. 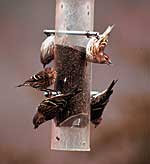 Although the house finch has become a common feeder bird, and a year round New Jersey resident, it's cousin, the purple finch, breeds only in the most northern reaches of the state, and is an uncommon sight during the winter months. When comparing finches at the feeder, take note that the purple (male) finch is actually a cranberry color, contrasting with much redder hues on the house finch. Remember that it is the males in the bird world that have most of the color. Drabber females blend in better with their habitat allowing for safer nesting. The female purple finch has a heavy white to cream colored eyestripe, absent in the house finch.

The white breasted nuthatch is evident year round. However, the red-breasted, again a cousin, is more common during the winter months. Red-breasteds are much smaller, have a heavy eyestripe and a red breast. They behave a lot like chickadees, stopping quickly at a sunflower feeder, plucking one seed, and darting away to a safe perch to eat.

Some of the more unusual winter visitors include pine siskins, evening grosbeaks and red and white-winged crossbills. The grosbeaks and crossbills are difficult to mistake. Evening grosbeaks resemble a grownup goldfinch with even bolder color patterns of white, yellow and black. They are about the size of a cardinal, with huge, cone-shaped bills that allow them to crack even wild cherry pits! Needless to say, they are voracious seed eaters­an average flock of 20 birds will quickly empty your feeders.

When the evening grosbeaks come in, keep your eyes open for pine siskins, red-breasted nuthatches, white-winged and red crossbills, purple finches, pine grosbeaks and common redpolls; they usually travel south together. Crossbills are about the size of a finch and are named for their distinctive crossed bills. There are two species - red crossbills and white-winged crossbills ­ and their names call out their identifying markings. They feed on the seeds of various pine cones. So keep your eyes up when there's a bumper crop of cones, and maybe you'll have a crossbill treat. They usually travel in large, noisy flocks which make them easy to find. Pine siskins resemble American goldfinch in size and behavior. They have pointy bills unlike most of the other winter species already discussed. They are predominantly brownish striped with yellow at the base of the tail and in flight feathers which flashes almost golden in good sunlight. They travel in flocks and love thistle or niger seed, so will often be found at feeders with goldfinches who prefer the same fare.

Less common, but always a treat, is the pine grosbeak. This large bird (an inch bigger than the evening grosbeak) is house finch red with a black stubby bill. Two white wing bars compliment both the male and female. They are more wary than most of the other winter irruptive species and not often found at feeders. Also unusual, but easier to spot than the pine grosbeak, is the common redpoll. Only about 5" tall, it sports a red cap (or poll), and a black chin. The bill is pointy like a pine siskin's and bright yellow. Although it can be enticed to a sunflower seed feeder, you can also find redpolls feeding on the catkins of birch and alder trees. These birds may travel in flocks numbering in the hundreds!

The aforementioned birds all have distinctive field marks or habitats that give even a novice birder a relatively easy time of identifying them at backyard feeders. However, there are other winter visitors that frequent yards, but are more or less ground feeders. Enticing these species requires either sprinkling seed on the ground or on a platform feeder a few inches above ground level. Beside northern cardinals bringing winter pleasure, other winter sparrows can be found hopping around the ground. Specialties include the white-throated sparrow, the white-crowned sparrow and the fox sparrow. Although they may be lumped into the common category of brown birds, they all have rather easy identifying marks for the backyard birder. They are all about the same size - 6 3/4" to 7", and they all have varying amounts of brown on them. However, the white-throated and white-crowned sparrows are just that. The white-throated has a conspicuous white throat in both male and female birds. The white crowned has a distinct white head with alternating black and white stripes above and below the eye. And its pink bill stands out. These two are similar but easily discernible species. The fox sparrow, on the other hand, can be highly variable in plumage. Most often, the body is a deep chocolate brown and gray with a reddish brown tail and rump and heavily striped breast. Although it is the same size as the white-crowned sparrow, it always appears like it is a heavier bird.

The pleasure of watching birds in an irruptive winter finch year is not only a learning experience but a real treat when one considers how infrequently they visit our state in large numbers. You don't need to spend lots of money or be an expert to attract these species to your yard. Black oil sunflower seed is a favorite for most of the species mentioned in this article; niger seed for siskins will provide a good supplement. Simple platform feeders of wire mesh and wood will keep sparrows, grosbeaks and cardinals happy. Inexpensive bottle or tube feeders will dispense sunflower seeds. Keep in mind that sunflower seed is also an enticement for hungry black bears, who are not true hibernators. Bring seed in at night until the weather turns, and stays cold enough to coax bears into hibernation. Seed may be left out overnight except during those January thaws when the bears will stir and come looking for a mid-winter snack. Other animals may also participate in your breakfast bar - squirrels, raccoons, chipmunks and other mammals still active during winter. Keep feeders clean so that birds remain healthy. Once you begin winter feeding, keep it up until natural food is again available. And keep your eyes out for wintering hawks that may stake a claim to small birds feeding in your yard. They are part of nature's process and can provide captivating watching as they streak through the yard scattering feeding birds in all directions. On very rare occasions, a special northern owl, such as a snowy owl, may delight northern New Jersey birders as it strays far from it's normal Arctic haunts. Birding hotlines can keep you updated as to the dispersion of winter species in your neck of the woods; in northern New Jersey call 908-766-2661

Always keep looking for the unusual; you may be surprised at how common it is this winter!

This story was first published: Winter, 2001