Homebrew University has closed, although Hackettstown breweries are going strong.

Profile and photos by Alison Hein

This light and airy Main Street storefront is dedicated to exploring and sharing the art and science of homebrewing beer. Everything needed to brew beer at home is available for purchase in the front of the spacious, organized store. In the rear, there is a large, well-ordered area where customers can make, bottle and label their own beer. Co-owner Warren Wilson offers a seasonal recipe for Pumpkin Ale: colored with fresh pumpkin purée and flavored with tingly pie spice, icy cold in a frosty glass, this brew is a great way to toast the harvest. You may need a little help from Homebrew University on this one. Cheers!

Wilson learned how to brew beer through many years of experimenting, and is driven to share his skill with others. “About 20 years ago my brother-in-law found his father’s log and decided to start brewing beer”, says Wilson. “He forced me into it because I kept drinking all of his product. Ever since then it’s been a hobby, and now it’s my business. I have a deep interest in and love for the craft.”

Wilson started a home brew club in 2009 with 5 other people called NJHOPZ which has since grown to have two divisions, east and west, and 75 members. The group meets on a monthly basis and shares ideas and enthusiasm for making different varieties of home-crafted beers.

But the club activities weren’t enough to satisfy Wilson. “I wanted to find a way to teach people how to brew beer”, he states. “I met my business partner A.J. through mutual friends and three weeks later we had a storefront. Two months after that we opened Homebrew University.”

The store has been going strong for a little over a year now and was granted a license to brew beer on premises this past July. Since that time, 21 groups have already been in to brew, with several more upcoming sessions reserved.

How does it work? “You’ll make a reservation and then we’ll talk on the phone to develop a recipe”, explains Wilson. “You’ll come in and brew for 3 hours. During that timeframe you’ll also develop your own personalized label. When we’re done brewing, we’ll put the batch of beer in the back and let it ferment for two weeks. When you return, you’ll spend 1½ hours bottling and labeling the beer, then take it home and let it rest for another week. Finally, you’ll test your beer to make sure you get a positive return. You know. That pssst sound when you open a bottle? And then away you go.”

People like to brew with the season, or drink with the season, Wilson says with a smile and wink as he describes the cycle. “We have Oktoberfest coming up so Pumpkin Beer is big. Then they’ll be coming in for hard apple cider. In November, we turn to Porters. In December and January it’s all about stouts; spring is red ales and stouts. Come warmer weather, everyone starts leaning toward paler beers like pale ale, IPAs and saison, a farmhouse, open-fermented brew. The lighter saison remains popular throughout the summer.” 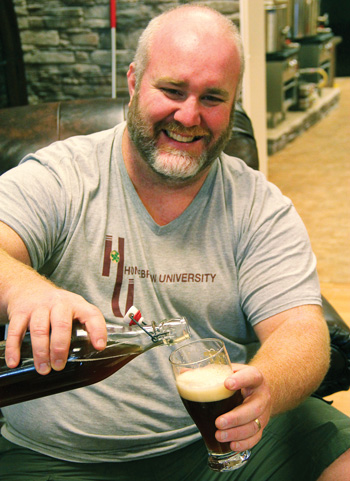 Chill two gallons of spring water as cold as possible, pour the remaining 3 gallons into brew kettle and heat on stove. Pour crushed malt grain into muslin bag and steep in kettle for 20 minutes or until water reaches 170°F. Remove bag(s) and discard. Bring water in kettle to a boil. Turn off burner and stir in the malt extracts, pumpkin purée and pie spice.

The mixture is now called “wort”, the brewer’s term for unfermented beer. Return wort to boil and add hops. Boil for one hour, then cool to approximately 100°F as rapidly as possible. (Use a wort chiller, or put the kettle in an ice bath in your sink.) While the wort cools, sanitize the fermenting equipment and everything else that comes in contact with the wort (i.e. hands) along with the yeast pack.

Fill primary fermenter with the pre-chilled water, then pour the cooled wort on top. Leave hot break behind (looks like egg drop soup). Add more spring water to bring the volume to 5 gallons.

Aerate the wort by stirring vigorously (bucket) or shaking (carboy), or use an aeration system and diffusion stone. Measure specific gravity with a hydrometer and record on paper. Add yeast once the temperature of the wort is 80°F or lower. Use sanitized scissors to cut off a corner of the yeast pack, and carefully pour the yeast into the primary fermenter. Aerate the wort again until yeast is thoroughly dispersed.

Hours: Homebrew University is open Tuesday through Friday from 2:00 PM to 8:00 PM and Saturday from 10:00 AM to 6:00 PM. Closed Sunday and Monday. Reservations required for brewing beer. All inclusive brewing sessions cost $175 for 5 gallons, and $250 for 10 gallons.

Other Offerings: “Beer Talk” seminars for $20 per person, or $35 per couple. On-site parties and events can be arranged, with catering provided from outside.

This story was first published: Autumn, 2014