Situated along the river, within the Delaware Water Gap National Recreation Area, Worthington State Forest comprises almost 6,000 acres extending about seven miles along the Kittatinny Ridge. There is boating and fishing on the Delaware, and the park is almost completely covered in lush woodland making an ideal place for hiking and camping. In fact, the area has a long association with travelers and those seeking a secluded getaway.

River frontage at what is now Worthington State park has always been a popular place.

This section of the beautiful and still unspoiled Hardwick Township on the Warren County side of the Delaware River has had a variety of names. In its early days of human habitation, in the pre-Revolutionary 18th Century, it was called Shawnee. When a local man, James Gould, introduced ferries to this area in 1736, he gave his ferry an Indian name, "Nanatuman", but most local folks called it "Gould's Ferry", the name that was soon adopted as the name of the settlement. The river at this point was partially filled with two large islands, Shawnee's and Depue's; Depue's Island was the home of members of that renown family. The channel for the river's traffic, timber rafts going downriver and ferries crossing the river, was narrow and turbulent, and it hugged the Jersey shore. In the early 1800s, the ferryman at that time gave his name to this crossing: "Shoemaker's Ferry". The timber raftsmen, traveling during spring freshet, charged through this narrow stretch of river, and attempted to avoid destroying ferry boats. These raftsmen had a different name for this part of the river, a title more descriptive and colorful... and totally unprintable.

The second ferry owner and operator, the man named Shoemaker, took over Gould's business around 1760. His family, which operated ferries at several different river locations, stayed on the job here for at least fifty years, until they sold the business to Jacob Brotzman.

Jacob Brotzman went into this ferry business in the early 19th Century and established a home for himself and family right on the Jersey shore. Brotzman worked hard, made some money, and took part in the rapid growth of this river-front settlement. Before long, he ran for office and was elected as a township committeeman, and then, later, as a County Freeholder representing his hometown. He was so liked and respected by his neighbors that they named their village, officially, "Brotzmanville". Soon, Brotzmanville got the first post office in the area, and a new schoolhouse for its children. By 1833, big Pahaquarry Township had four mills in operation, two of which were at Brotzmanville.

Park Headquarters was once a ferryman's home.


In the second half of the 19th Century this now-prosperous ferry business was purchased by Charles Walker and became "Walker's Ferry". Young Walker stayed and prospered, operating this busy ferry to the end of the century. The closest bridge competition, the Columbia-Portland span, was miles downriver. In 1903, Charles C. Worthington, a big city businessman, President of the Worthington Pump Corporation, and probably a millionaire by this time, purchased the ferry as a small part of his major acquisitions in this Delaware Valley. Worthington's vast real estate purchases on both sides of the river made the ferryboat especially useful to him, personally. It continued crossing the river here, but as Worthington's private chauffeur-driven source of transportation, not as public transportation. Worthington initially farmed his land on the Pennsylvania side of the river, but he later opened it to the public as a resort area. On his vast acreage in Jersey he became, of course, the owner of Walker's house, and rented it to Harry Cudney who was the local game warden. After Cudney, he sold it to the Walter Van Campen family as a residence. They lived in it many years.

Charles Worthington erected his own elegant residence on a hillside half way between the river and mountain-top Sunfish Pond. He named his residence "Buckwood Lodge". Sunfish Pond, a good-sized lake in a wilderness 600 feet above the river on Worthington's property, supplied its "pure" water, thanks to Worthington's plumbing efforts, to the local residents. It was considered to be vastly superior to the Delaware's water. He renamed his beautiful Sunfish Pond "Buckwood Lake".

In this same area Worthington established a game farm. Deer had become extinct in New Jersey and he imported from Virginia a deer species that he raised, like a herd of cows, on a thousand acres of this part of Warren County. Eventually he tore down the eleven-mile long fence, and released his hundreds of deer in the area, resulting in the growing herds of deer that eventually occupied the whole state. And he did the same thing with his pheasant farm, which was one of the largest in the East.

Worthington also purchased both of those large islands in the river, the Shawnee and the Depue. He farmed the entire Shawnee Island for a while but later in life converted the Pennsylvania island to the Shawnee Country Club and Golf Course, which appealed especially to professional golfers; they eventually made it the official course for the annual PGA. tourney. The other island, a Depue property since 1783, also became a resort area open to the public until the severe floods of recent years. 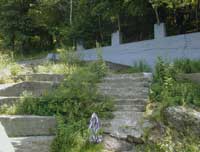 Worthington's land holdings on both sides of the river, and on the islands in between, totaled slightly in excess of 8,000 acres. An already existing business that was not owned by Worthington was Camp Karamac, a river-front hotel and collection of cottages, with swimming pools, playgrounds, and boating on the river, all for adults. Karamac, named for a fictional Indian warrior, catered to the elite visitors and other tourists who soon flocked to the area. The resort owners were a couple of New Yorkers, John Newmarker and Arthur Feindt, who became close friends with Mr. Worthington. Worthington finally sold the camp owners his retired ferryboat so they could conduct guests on river tours or transport them over to the Pennsylvania side for a visit. And Worthington's two sons, Reginald and Edward, later opened a hotel, Buckwood Inn, on the Pennsylvania side, on nearby Shawnee Island, to get some of this business.

This fabulous life enjoyed by Charles Worthington had to come to an end as all lives do. Charles C. Worthington passed away in 1944 after a busy, fruitful, and honorable life. His sons, Reginald and Edward, and their families, remained here, operating the various family businesses until 1954, when the State of New Jersey made the initial purchase of these Worthington land holdings. Eventually, some 6,000 acres of the New Jersey Worthington property in this river valley became, and is today, the Worthington State Forest.

The Jersey side of the river here is not what it was 150 years ago. The great Flood of 1955, which destroyed much of Brotzmanville, was a contributing factor. Sadly, Brotzmanville no longer exists, but its past is recognized by a marker on the side of ancient Old Mine Road. However, the old home of Charles Walker and, then, Harry Cudney and the Van Campen family survived and is now the local headquarters of Worthington State Forest. In this unspoiled forest, two inexpensive state camping areas exist for guests, and the thousands of acres along the Delaware have several hiking trails. And that great 2000-mile Appalachian Trail passes through this State Forest. A little brook, Dunnfield Creek, babbles through the center of this forest and, in a mile, enters the Delaware. And where it enters the Delaware there was, in the old days, another river crossing service, named Dunnfield's Ferry, that served its area before there were roads on the Jersey side. And looking westward over the river, those two nearby islands, Shawnee and Depue, are as impressive as ever. The narrow opening between them, which provided the Gould-Shoemaker-Brotzman-Walker Ferry with some protection in high water, is still there; and a look upstream will provide a view of the not-too-distant and just as well-known river marker, Tocks Island, with a story of its own to tell.

The UACNJ facilities in Jenny Jump State Forest, near Hope in Warren County, are 1,100 feet above sea level, one of the few dark sky locations left in the state.