If Sondra Nordheim were born today, he'd probably have the savvy to make sure he got credit for the skiing maneuver he popularized. Then he could capitalize on his creativity with a new line of equipment, clothing, and even some accessories to match. Such was not the case in 1868 when Nordheim laid the groundwork for modern skiing. His flexed-knee, free-heel turn was named after the town of his origin, Telemark, Norway, rather than the man. Nordheim is also credited with the parallel turn used by alpine skiers.

Still, the father of Telemark skiing would be smiling now, were he still making turns. Modern technology and ski-subcultures have conspired to create a Telemarking rebirth. Improvements in equipment are making Telemarking more versatile and attractive to winter sports lovers. And, as Alpine skiing and Snowboarding become passé, suddenly the old way is the new way. Telemark is cool.

There's something about the look of it. Unlike the parallel turn, which uses a stiffer looking, slightly squatted posture - which can also be done on free-heel equipment - the Telemark turn, relies on a distinctive flexed knee, genuflecting, movement. To some it looks muscular. Others think it graceful, ballet-like.

Either way, when done with skill the Telemark turn seems to enthrall spectators and other skiers alike. Alpine (fixed heel) skiers, on seeing Telemarking for the first time, can often be heard expressing their incredulity. More than one Telemark skier has heard, "What the #@&* is that!?" screamed down from the lifts above. And it isn't just the Norwegian sweaters with the reindeer designs that some Telemarkers wear. Even casual, recreational skiers realize that the form looks cool - it's something different.

Cool has been cooking for a while. In the US, Telemarking got restarted in the 70s when the baby boom generation took to the woods. Backpacking, hiking, camping and eventually mountaineering thrived as part of their back-to-nature credo. Cross-country skiing helped them extend these activities year round, into winter.

But to survive downhill runs in the backwoods, skiing through trees, parallel, wedge or stem turns, familiar to many skiers, don't always make the grade. What's needed is the Telemark turn. For years this turn was the holy grail of skiing for some - a dream attempted but rarely achieved, and even then by only a few. 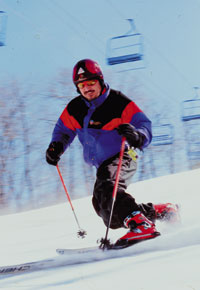 Once mastered the Telemark's natural feel and extended platform create stability and maneuverability for skiing with a pack on rough terrain or in untracked snow. But learning it was once not so easy. In the early days, most Telemarkers were self-taught. And the equipment seemed more suited to skiing in the 1890s than 1970s. Leather lace up boots, cable bindings, flimsy poles that were not adaptable and skis not suited to the task, conspired to make the club of Telemarkers an exclusive band of snow masochists. To alpine skiers back then Telemarkers looked like tortured albatrosses on barrel staves. Telemark skiing was view mostly with amusement and certainly never envy.

Telemark aficionados, who knew it should be easier, began to push for improved gear. Better bindings, plastic-leather hybrid boots, wider floaty skis and adjustable ski poles, were an outgrowth of demand and the ingenuity of a few dedicated small manufacturers, who were themselves all Telemarkers and mountaineers.

Superior equipment has opened doors to more powerful Telemark skiing moves and attracted a younger generation of "Tele-skiers" from the fringes of Alpine skiing and snowboarding. Ex-high school and college ski-racers, bored and wanting for new challenges, have opted to lose the heel pieces. These generation X and Y skiers have joined their aging happy-hippie forebears and adopted the Tele slogan: "Free your heels, free your mind." Backcountry access has long allowed Telemark skiers the ability to ski where others can't. This renegade image registers not only with teenagers looking for the cutting edge, but also with long time skiers facing mid-life crisis.

Just a few years back, finding a Telemark instructor on the New Jersey slopes was not possible. Improved equipment and visibility for the sport attracted ski professionals the same way other skiers are seduced by this classic variation. The suitability of New Jersey's ski terrain to learning the technique helped attract early adopters. Telemark is now anchored firmly by trained instructors found at each of the state's ski-resorts. Campgaw ski area, part of Bergen County Parks in Mahwah, hosts an annual NATO (North American Telemark Organization) Telemark Primer on either the second or third Saturday in February. It is intended as an introduction to telemark, and is targeted at the XC or Alpine skier, regardless of skill level. This Primer generally attracts beginners and intermediate level skiers from both disciplines. Additionally, telemark instruction for beginners through advanced has always been available most weekends at Campgaw. However, to ensure that an instructor is available on the day of your planned visit it is always prudent to call ahead (201-327-7800) and reserve a lesson. You must bring your own gear, as there are no rentals available.

In Vernon, PSIA certified Telemark instructors are on staff at both Hidden Valley and New Jersey's largest ski resort, Mountain Creek, Chuck Wallace, a level III instructor at Mountain Creek, also trains and coaches new instructors. Whenever Wallace gets a chance he hits the snow in Tele-mode. "For me the attraction to Telemarking is versatility - being able to ski anywhere," Wallace says. Chuck skied the backwoods on his own for years, teaching Alpine at Craigmeur before it closed to skiing. There he began to Telemark on the slopes too and got requests for teaching from interested Alpine skiers. "They saw it as something different and new - although of course it's really old - and still familiar, compared to the jump to snowboarding," Wallace says. As he rose through the ski school to become director at Craigmeur, Wallace also attended PSIA Telemark training clinics and exams. He says this helped him become a better teacher and skier.

Mountain Creek offers some of the more challenging Telemark terrain in New Jersey with steep trails that are allowed to bump up from skier traffic, growing "moguls." It is these steep moguled trails that offer the ultimate challenge to all skiers, but even more so to free-heeled Telemarkers.

The lack of a heelpiece means the skier needs to build confidence in perfecting his Telemark stance and turn. Jersey ski areas have abundant intermediate terrain to help accomplish this. Once Telemarkers master the basics, they can move to the greater challenge of steeper terrain and moguls, the best of which include Curly Cue and Hell and Back at Hidden Valley and Zero G and Pipeline at Mountain Creek.

With the right combination skis, boots and poles, on the feet and hands of a practiced skier, descent is possible in almost any conditions or terrain. To many snow sports enthusiasts, the ultimate goal of Telemark skiing is to combine the flexibility of the traditional Telemark style with new techniques and equipment to break out of the confines inherent in alpine and cross country skiing. With a handful of ski areas that offer a variety of terrain, New Jersey skiing converts soon find that Telemark is a classic cool way to have fun.