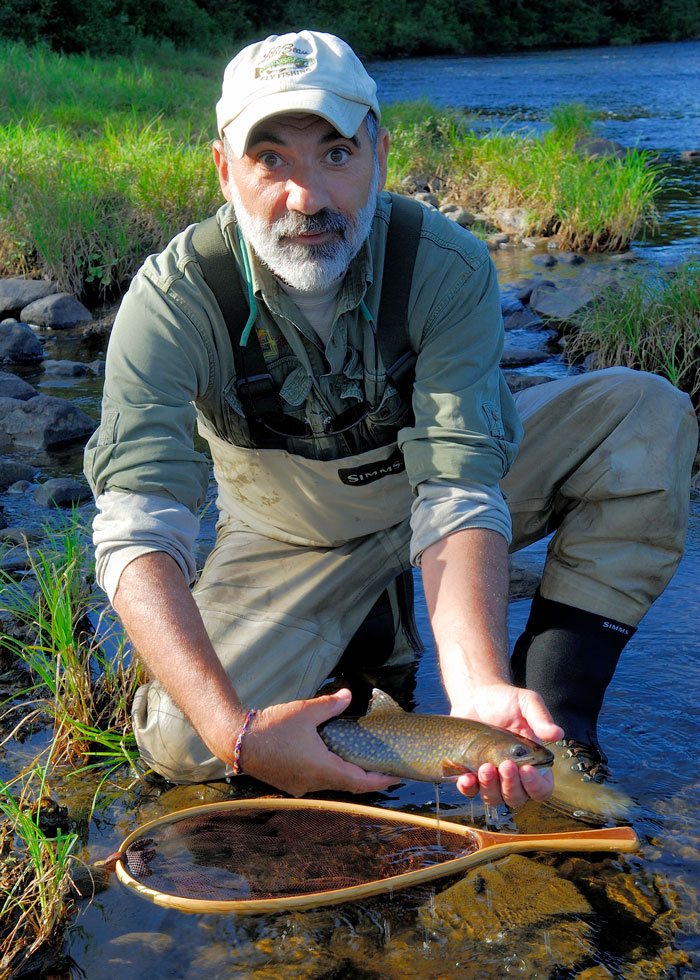 In a Universe once smaller than a single atom, but now so large as to be unimaginable, hidden among celestial bodies too numerous to count, in a solar system found along the southern rim of the Milky Way Galaxy, on the third of nine (some say eight) planets circling that system's closest star, across a set of mountains rising forth from that planet's northeast quadrant, in a hemlock forest surrounding a little stream, snow remains packed, although receding, the stream's current running high and cold, coltsfoot spreading over an exposed shoal, a touch of yellow to brighten the otherwise bland landscape.

At first glance the land extending beyond the forest appears barren, the only color found in gardens laced with daffodils, fields bursting with forsythia, but upon closer examination, magnolias and dogwoods, wild cherries and black birch, barberries and brambles will be next to bloom. As the planet draws closer to the sun, other plants will blossom, the leaves of trees and bushes sprout, red squirrels and chipmunks stirring from their winter hidey-holes.

Already, the birds have arrived, phoebes soon to build their nest under an eave, bluebirds inside their box, cardinals in the branches of a lilac, robins in those of a prickly rose. Hidden in the rivers and rills, awakened from their semi-hibernation, trout will once more dimple the surface.

Indifferent to our worries and our pain, our pride and our vanity, trout live out their silent lives ignorant of our whims. They care nothing for politics, with its endless bickering and bombastic rhetoric and have no interest in excuses or rationalizations. Although willing to endure flood, drought and other natural disasters, pollute the water they live in and they will die. Raise the temperature of their surroundings and they will die. Destroy their spawning beds and they will die. Because of their uncompromising nature, these piscine warriors provide the link that connects me with the wild; allow me to experience the wonder of our short time here.

While some may dust off their golf clubs, bats and balls, wash cars and mow lawns, I tramp streamside, fly rod in hand. Perhaps it's my age, maybe it's the world we live in or it could be the especially long winter, but this year more than any other, I'm looking for that first trout of spring to prove that my little part of the universe has yet to spin completely out of control.

And so, on this third Saturday in March, the day when the sun crosses the plane of our planet's equator, I find myself kneeling beside a pool on a forgotten brook that slips off the spine of the Kittatinny Mountains, rhododendron and mountain laurel sprawling down its far side, hemlocks rising from its forest floor.

A few feet away a stonefly crawls over a moss-covered boulder. Taking flight, the tiny black helicopter hovers over the stream passing through a shaft of sunlight before veering over the pool. A few moments later a second stonefly skitters across the current and then another. I hear a splash; to my left concentric circles spread outward. My first cast is awkward, the second better. On the third, my fly bounces off the bank and onto the surface. When I twitch the imitation, the fish strikes.

The water, chilled by snowmelt, stings my hand as I slip the hook from the corner of the brook trout's jaw, hold the little fish in my moistened palm, marvel at the red-in-blue spots that glisten as water drips down from its side.

For me, it has always been about running water, those places where skunk cabbage raise their mottled heads and columbine flower from mountain crags, where trilliums and trout lilies adorn the shore, where mink roam and beaver build their dens, where deer bed down and black bear feast on blackberries and redcaps, but most of all where wild trout, especially brook trout, live out their Spartan lives.

Perhaps it's nothing more than an attempt to duplicate the moment when that first fish rose to my fly. I don't pretend to understand why, nor do I seek to explain or deconstruct, but only to celebrate another year on planet earth.

You can email Bob with your comments at or visit his website for more information about his writing, including his recently published novel: North of Easie.