Deep in the Heart of the Highlands

Ever wonder about all those depressions you see in the woods? Or old woods roads or dug out trenches with mounds of rock or soil around them? What went on around here, anyway? Pack a bottle of water, a magnet, and this hike and hit the trail! Get ready for an historic walk in the woods and to experience a bit of the people and industry that once made New Jersey proud.

From Route 80 in Rockaway, take the Mount Hope exit and head toward Mount Hope on Mount Hope Avenue. At the stop sign, turn left onto Mount Hope Road, then left again just past the firehouse onto Garden Road. Drive to the parking lot of Mount Hope Pond Park. 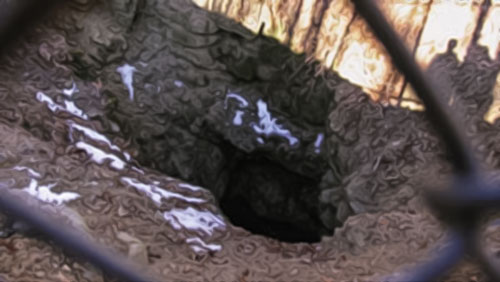 Lots of artifacts abound in this Rockaway Township park ­ of human industry and nature's bounty harvested for civilized necessities. Now nature has reclaimed much of all the mining remnants, but with a careful eye and a little knowledge offered by this self-guided walk in the woods and anyone can see them. Perhaps you will sense a token of the blood and sweat from lives that came before.

Walk to the left of Mount Hope Pond where three paths enter the woods before you. The pond provided energy to the waterwheel that ran the blower for the furnace. Choose the middle path and walk along the right side of a narrow trench, partially lined with a rock wall. In 1831, mule-drawn wagons brought iron ore out of the woods on this path to the Morris Canal. It's hard to imagine, but 30 years later, the full scale steam-powered Mount Hope Mineral Railroad pulled ore cars from this little ravine to Wharton. Its source, the Elizabeth Tunnel, is just up the trail.

Follow the path edging away from the railroad. Experts think that the station house was here on the right where rotting timbers lay with big rusty bolts, but are puzzled by a deep depression on the left that may be a caved-in shaft that led down into the mine. There is no record of it.

Head slightly downhill and turn right onto an old woods road, probably another mule cart path, to a fenced-in shaft on the left. Under the branches and weeds that fill the enclosure, it is possible that the shaft is still open underground ­ and dangerous. Mine shafts were used for several reasons ­ ventilation, for men to enter and exit, to bring equipment down, and to hoist ore out. 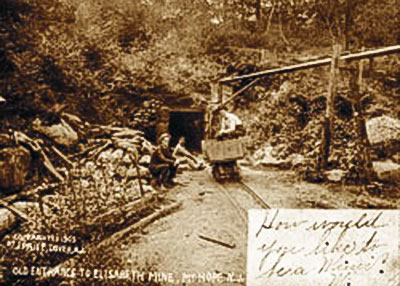 Above: The Elizabeth Mine adit in 1905.
Courtesy Robert and Mary Allen Collection. 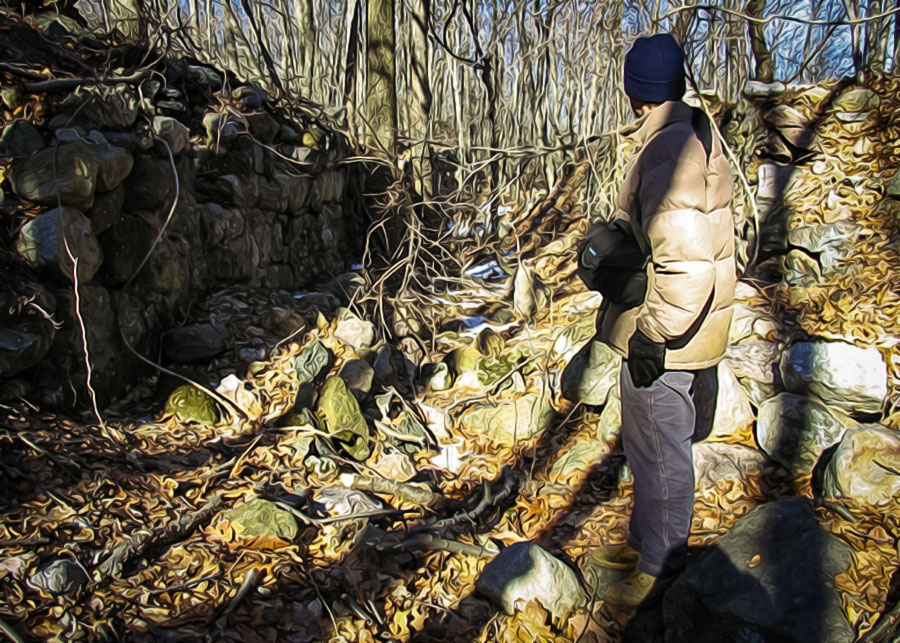 Cut for the former Mt. Hope Mineral Railroad, a full size railroad built to service the operations at the Elizabeth Mine.

Next to it, a shallow ravine almost leads up into the earth. Recognize it by the notched out boulder on the right side and a young tree growing in the middle. This is the Elizabeth Tunnel adit (horizontal entrance as opposed to vertical shafts) that once went 850 feet into the hillside. Here, mules and, later, a narrow gauge railroad on two sets of tracks picked up iron ore and lugged it out. It was transferred to the larger railroad. Men probably entered and left the mine here too.

Continue uphill and at the top bear left, then left again at the "Y". On the left, piles of rock surround a shallow mine pit. Continue up to the top and turn left onto a woods road. On the left, a chain link fence surrounds a "hoisting shaft," the primary means of raising the ore out of the mine. Walk around it to where you can get a good look into its black depths. Of course, soil erosion has scoured out its perimeter. On the way back to the trail, check out the open pit surrounded by short ridges of angular rock known as "tailings." Tailings were typically piled outside an open pit then hauled away, but for some reason this was not. Native surface stone here is generally rounded and smoothed over time; tailings rock was blasted and angular.

The 11 iron ore veins of the Mount Hope Mine outcropped ­ jutted out strongly from the ground. Aiming in a northeast direction, they dove deeper and deeper into the earth. So men started mining in open pits on the surface, then dug deeper and deeper with the ore vein. One of the sub-mines went down 2,740 feet! (That was the New Leonard Mine, put into gear during World War II.)

The farther southwest you hike, the more open pits you'll see because they sunk further underground as they went northeast. Back to the path, head uphill until just when you've run out of breath (you've climbed about 200 feet) About 30 feet in on the left, the Painter Shaft, strung with barbed wire, was probably another hoisting shaft. The Elizabeth Mine had many shafts to bring up the ore over different periods of time.

Back to the trail and the top of the hill... You are now entering Mount Hope Historical Park, a Morris County park. On the right, a line of open pits appears. (This is also the beginning of the White Trail that leads down to the Richards Mine, connected to the Elizabeth by a tunnel.) The shallow pits undulate over and down the southwest side of the hill ­ perfect for outcrops. Mike Hetman, iron mine aficionado, thinks the first one may have been an exploratory shaft. Walk across them, over a natural bridge, to get a good view. A Morris County park map says the pits are 1850s' shafts dug to explore the Richard Mine. "Nature has reclaimed it. If there was an entrance in there, it's buried under the soil," says Hetman of the leaf and soil-covered pit.

One indication of a pit or a shaft, says Hetman, is a structure with big bolts that once supported a headframe that hoisted buckets of ore up out of the shaft. Here, they've mostly all rotted away, but a few remain. Headframes looked like cranes and ranged from 25 feet high in the early 1900s to over 100 feet 40 years later.

Head back the way you came, but instead of crossing the Mineral Railroad bed, stay on the path, pass the adit, and make a sharp, angled-back left up on a wide path toward the parking lot.

Could it be that Rockaway was named after all the rock they took away?

The Making of a Mine Aficionado 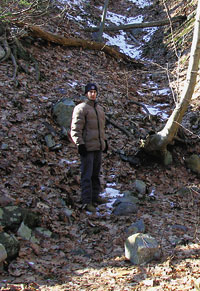 Mike Hetman, 28, grew up in Rockaway. In high school, his next door neighbor used to tell him there were dangerous mines out in the backwoods. "All that did was spur my curiosity," he says. "I went looking and found only surface workings and decided with my brother and my mom to learn more about it. I grew up knowing I lived in an old mining town of great historical significance."

He learned about miners and their places of worship through rare old books long out of print such as an 1855 Geological Survey, oral history from local miners, hikes with others, and research "in the field and under it," he says. "There are certain feelings you get when you're in a mine. If you know what to look for and have talked with a miner, you can truly understand what mining was about."

Mike, his brother Greg, and others interested in mining history explore mines of all sorts in the mid-Atlantic states. While he acknowledges that entering mines is a controversial topic for many reasons he says, "You have to be willing to go into a mine to understand it." He and Greg share their knowledge on their fascinating website.

For the formative steps in a guide dog's youth, The Seeing Eye relies on a network of Puppy Raisers throughout New Jersey and eastern Pennsylvania who participate in a program that began in 1942 as a joint effort with 4-H Youth Development.

The Cultural Resource Program at Picatinny Arsenal has documented dozens of historic and Native American archaeological sites that tell a story that spans centuries in the New Jersey Highlands.