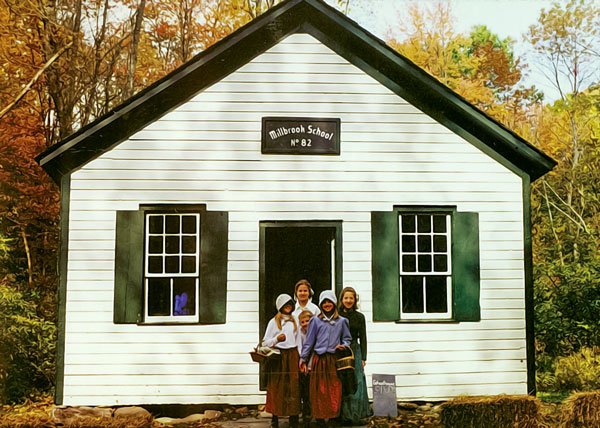 Millbrook Village, part of the Delaware Water Gap National Recreation Area, is a re-created community of the 1800s where aspects of pioneer life are exhibited and occasionally demonstrated by skilled and dedicated docents throughout the village. Although most of the buildings at the site are replications, Millbrook has a real past. A few of the old structures have survived the ravages of Mother Nature, and escaped condemnation to make way for the ill-fated Tocks Island Dam project in the 1960s. Although the project sealed the fate of this and other villages in what is now a National Park, the Millbrook Village Society has worked hard and consistently to bring the village back to life.

Nan Horsfield, one of the area's outstanding historians, has accumulated a large and well-organized collection of books, files, newspaper clippings, photos, and more, telling the story of our area. But in addition to this material, her personal background, especially as it relates to her mother's side of the family, named Spangenberg, and especially to the generations of Spangenberg farmers who lived in and around the Warren County village of Mill Brook, tells a rich and endearing family story. 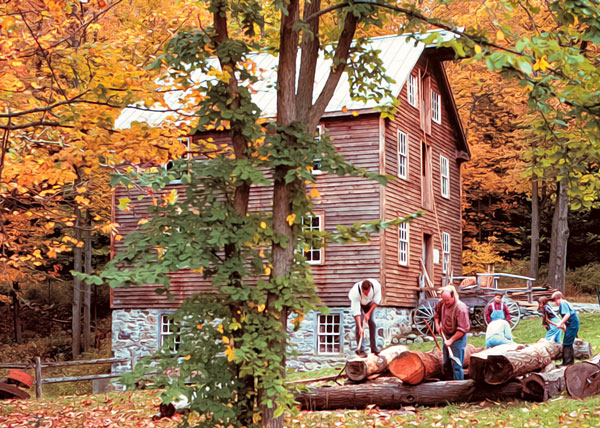 Her mother, born Mary Julia but known to everyone as Julia, was Nan's principal source of information, and her most intimate contact with the Spangenberg (earlier spelled Spangenburg) side of the family. Julia was the oldest of seven brothers and sisters born in old Mill Brook. Her birth date was 1903, and she lived an exciting and happy childhood in the little village and in the house owned by her father, Jason. In the same village lived other members of the family including Julia's favorite, Uncle Lester, a confirmed but happy bachelor who remained in the village until he died at a ripe old age in his ripe old house with heirlooms and junk piled to the ceiling. Julia's family home in the village was adjacent to the impressive local Methodist Church. The family didn't attend church often, but the children listened each Sunday to the hymn singing. Christmas was the only church day in this family and the children wore their shoes, sang hymns, and enjoyed the Minister's Christmas candy.

The other institution, the village school, dated back to 1840 when classes were held in the basement of the original church. When church membership outgrew its little home and moved to the present bigger structure in 1868, the school board took over the first floor of the small structure and educated local children here for almost a century.

Father Jason, after a house fire, moved his family from declining Mill Brook to a more promising and modern village called Layton, in nearby Sussex County. Here the family lived on, and Jason's two surviving children, now a little older, are still there. For a while Nan lived in Layton with her mother and clearly remembers Grandpa, who passed away in 1957 at age 87. His first daughter, Julia, Nan Horsfield's mother, reached the age of 92. 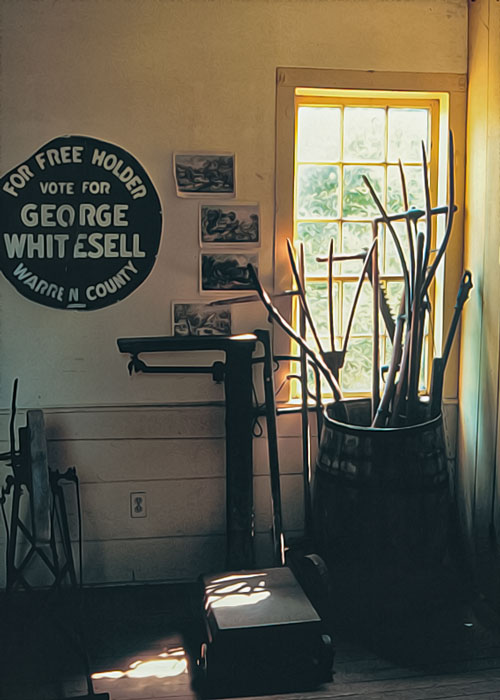 That ended the family's life in Mill Brook that had started, probably in the late 1700s. The last family head, Jason, had been born and raised here by his father, Andrew, and mother, Julia Garis. She was a member of one of the area's first families. Andrew, only age 17 when the Civil War began, managed to serve his country during this conflict and got home safely when it was all over. He produced his son, Jason, just 5 years later... and a few more offspring besides. Andrew was a farmer, too.

The Warren County map produced in 1881 as part of the Beers Atlas, identifies the village as a busy place with a grist- mill, a blacksmith shop, the Methodist Church, the school, a hotel, a store, and about a dozen dwellings. It also locates the homesite of Andrew Spangenburg and another home just up the lane from the church, of "Mrs. S. Spangenburg". "Mrs. S." was Sarah, the mother of Andrew and the widow of an earlier Spangenburg in the area, Andrew's father, James. James' birth date is 1808. His parents were Henry and Mary; her maiden name was Shoemaker. Henry and Mary are the earliest family members of record to live in Mill Brook, but little more is known of them. Son James, when he grew to adulthood, farmed the area. He took time off to marry a local aristocrat, Sarah Hill, and raised a fine family. He bargained and traded with his wealthy in-laws and acquired top quality farmland in the area. Perhaps his hard work shortened his life, for he passed away in 1866 at the age of 58. Or perhaps his short life was caused by his extra effort to produce and raise a first-rate family. He succeeded in the latter.

But the life of Mill Brook has not ended. Or, if it has, it's been reborn. The "new" church, built in 1860, still holds services, including those wonderful Christmas meetings, and the old one-room schoolhouse still stands and could reopen for classes tomorrow, if necessary. Even Uncle Lester's house survived. A sign identifies it as "Lester Spangenburg's Cabin"; its been cleaned up. And every year the still large and active Spangenberg family holds its reunion, with Nan Horsfield in the happy crowd. And coming up soon is an annual celebration that shows off the lovely and historically rich village to the general public. This event is called "Mill Brook Days" and it brings to life the family motto; "They Always Had A Happy Life".

It would appear the Nan has had good reason to love the past. The family supported itself with local farming, and Nan remembers as a child helping the family especially with roadside sales of their produce. Her mother and grandfather Jason both lived into their 90s. And Jason's grandfather James must have loved the community, for they all lived here and raised their children here, beginning in the early 1800s. They all raised large families-and healthy ones, with one exception. That exception was Uncle Lester, who never married, although he had a girl friend, once. But he lived in Mill Brook, to a ripe old age, in a ripe old house cluttered and filed with junk.

Millbrook Days are celebrated each fall at Millbrook Village in the Delaware Water Gap National Recreation Area, 12 mi north of Rt 80 at Old Mine Road and Rt 602. Admission is free.

For information on this and other events at the Village, check the Millbrook Village Society Facebook page.

If you like New Jersey history and anything about the Delaware River, you'll love Frank Dale's book, Delaware Diary.

Located in Sussex County near the Kittatinny Mountains the camping resort offers park model, cabin and luxury tent rentals as well as trailer or tent campsites with water, electric and cable TV hookups on 200 scenic acres.

This story was first published: Autumn, 2001