Mud. It is impossible to keep it off the rug. My boots, Moose's pads track it in each time we enter the house. Most days the temperature rises into the forties. The snow has receded, but tarries in the nooks and rills and in the lee of our home and the various out buildings set back along the edge of our woodlot. 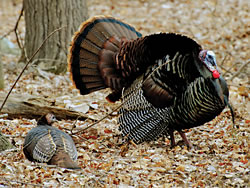 The sun rises a bit earlier, sets later. The birds notice, their early-morning chatter deafening as they congregate in the tippy tops of the trees. Besides the juncos, chickadees and tits that have spent the winter at our feeders, robins now peck at the half-frozen ground while bluebirds flit around their boxes like first-time home buyers trying to choose where to build this season's nest.

It has been raining since I awoke, a cold nasty drizzle, threatening to turn to ice. From my window I look out upon the pond that separates the woodland from our gardens. Turkeys, four of them, emerge from the fog, three Jakes and an older Tom wobbling out of the woodlot and across the dam. Now and then the Tom stops to flair his feathers. It won't be long before the ducks return, first the mallards and then wood ducks.

Beside the mountain brook, the tips of skunk cabbage emerge along the banks that are still blanketed in snow. Black stoneflies have also emerged, one of the first of the new season's aquatic insects to hatch, some fluttering over the swollen current, others clinging to the streamside branches. The trout remain indolent, unwilling to come out and play. 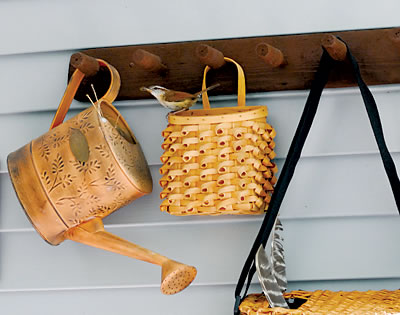 Although the days remain cold and gray with the patter of rain against the windowpane, bird song fills the air, beginning at dawn and continuing late into the afternoon.

Like indigo comets male blue birds streak across the yard. A pair of phoebes has returned, joining their avian kin. When not working on their mud nest, one or the other, I can't tell which, perches on the top of a nearby post, bobbing their tails before taking off to catch insects on the wing. The robins are also busy, collecting sticks for nests they have built in the recesses of bushes and shrubs where they will be hidden from view once the branches leaf out.

From my window, I watch two cardinals weaving pieces of yard litter into a nest they have fashioned in a rhododendron. A Tom struts out from between two cedar trees, his breast feathers on display. Pretending not to notice, a small flock of females peck at the lawn a few feet away.

Although the peas and radishes I planted earlier this month have broken through the soil, the potatoes have not. Daffodils bloom at the edges of the lawn, forsythia soon to follow. Trout lilies spread across the forest floor.

Along the stream, coltsfoot and marsh marigolds are in bloom. By months end, skunk cabbage will unfurl their mottled leaves. I've been waiting for the blue quills to hatch, the first major mayfly to bring the trout to the surface. Later this afternoon, after the sun has warmed the water, I'll walk the banks of the brook, my fly rod in hand.

Memories of the long night have faded as the sun warms both field and forest. As if overnight, flowers, their yellows, reds, pinks and blues appear in every corner of our yard, the air sweet with their smell. The sound of lawn mowers has replaced that of chainsaws and in town the young women have shed their slacks for skirts. 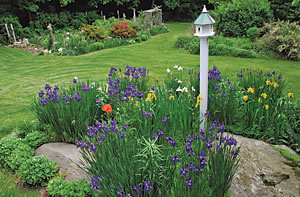 Two wrens take turns arranging sticks in a watering can that hangs on the porch wall beside our back door. I catch glimpses of warblers as they migrate north. Yellow rumps, olive breast feathers, black-and-white wings flash amongst the unkempt bushes and vines growing wild in our lower field. Listening carefully, I pick out the trill of titmice and the white-throated sparrows' familiar refrain among the songs of cardinals and robins.

In the grass that has turned green from all the rain, rabbits graze on dandelions while woodchucks waddle from their hidey-holes, racing back at the slightest sound. Chipmunks scamper from rock wall to woodpile.

I spend more time in my garden. In addition to planting lettuce, arugula and broccoli, I add a few cabbage and Brussels sprouts that Trish will enjoy in the fall. Last year's chives are doing well, but I must replace the oregano and parsley that did not overwinter. The raspberries have leafed out and the rhubarb is already large.

In the woods, the may-apples are now flourishing. Bluets are scattered along the trail, the edges of each tiny petal tinged with blue, a tiny circle of yellow at the center. The red-and-yellow trumpet-like flowers of columbine sing out from the crags and corners of boulders as I hike down to the mountain stream.

The Quills that began their hatches during the last week of April are fluttering recklessly above the surface of every pool, riffle and run. Like streamside faeries these mayflies appear to enchant the trout that, at long last, are eager to grab an imitation, perhaps a Quill Gordon or Hendrickson, if cast with care. 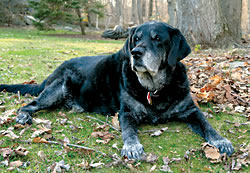 Although glad to be seated on this log, once more facing my favorite pool, my sleeves again rolled back up to my elbows, the sun warm on the back of my neck, a familiar melancholy sweeps past like a cloud over the sun. It is a sweet sadness that licks at my tears while I remember my dear friend, who had grown old, and after fourteen winters, weary, one morning, too tired to open his eyes.

You can email Bob with your comments at or visit his website to subscribe to his blog or for more information about his writing, including his recently published novel: North of Easie.

This story was first published: Spring, 2011