The drive up the lane starts slowly through cow pasture and planted trees with glimpses of 19th century blue barns. Soon the North Branch of the Raritan River appears, meandering, shallow over rocky riverbed, picturesque and sparkling clear. The lane ambles upward as the stream turns away, then leads through woodland until it emerges hilltop, with stone cottages and stable in view, then swings in front of a small "castle" in the hills of Somerset County.

This is Natirar ­ home of the once and famous King of Morocco. Silent it stood for 20 years after a lifetime of industry and frailty within its elegant walls. But no longer does it wait for merriment and life. You can come enjoy its offerings -- spa, restaurant and respite indoors; hiking, horses and fishing outdoors, events, exhibitions and concerts, a museum and interpretive center. Its proud new owner is the Somerset County Park Commission.

The Commission bought the 491-acre estate for $22 million with the intent to preserve this crown jewel as open space. In addition to the its historic and scenic value, the property offers opportunities for watershed protection of two native trout streams and an abundance of recreation activities ­ aspects consistent with the Commission's mission. "All of those things satisfy what the county's goals are in land preservation," says Tom Boccino, manager of planning and acquisition for Somerset County Park Commission. "It's all of the county's programs wrapped up in one property. You don't just stumble upon 500 acres that looks like this and are able to purchase." 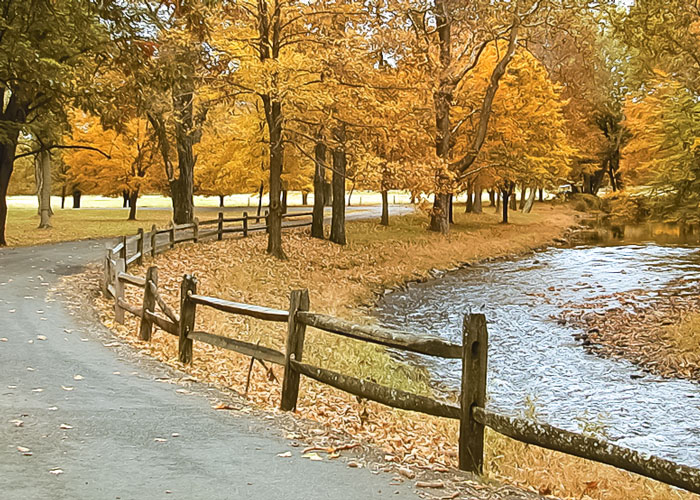 The river and Peapack Brook run through it. The estate includes 22 buildings, many historic, six wells and three bridges, NJ Transit right-of-way and three streams, a pond, woodland. The 33,000 square-foot mansion itself, grand that it may be, is sedate and austere. Its history intrigues.

Kate Macy and Walter Ladd began acquiring property in the Somerset hills in 1905. Macy was a Quaker heiress to a whaling/oil/shipping fortune; her father's business partner was John D. Rockefeller. Although Ladd listed his profession as "gentleman" and, at a later date, "insurance broker" on his passport applications he spent the majority of his married life managing his wife's fortune, and yachting! They married in 1883 and rented property in Bernardsville as they acquired small local farmsteads until their estate spread over 1,000 acres throughout Peapack/Gladstone, Far Hills and Bedminster. They named it Natirar -- Raritan spelled backwards.

The Ladds hired Harvard architect Guy Lowell to design the Tudor-style mansion, which was completed in 1912. Most prominent on his resumé are the Boston Museum of Fine Arts and the New York County Court House on Manhattan's Foley Square. He was assisted by Henry Hardenberg of New Brunswick, who designed buildings at Rutgers University, then apartment buildings in Manhattan including the Dakota, and finally luxurious hotels such as the Plaza.

Although the Ladds had simple tastes, the interior rigging befits the dignity of any 40-room mansion. Beneath a molded plaster ceiling, the living room walls are decked in wood linen-fold panels with original electric light fixtures. The library has the most detailed woodwork in the house. Under a fleur-de-lis ceiling, tall leaded windows look out over the North Branch of the Raritan River that meanders for two miles across the property.

With Kate's religious background, the Ladds were private people who cared not for glamour and parties. Theirs was a philanthropic life with a mission of helping people. They had no children, and story has it that Mrs. Ladd spent most of her adult years in a wheelchair, although she had no real physical handicap. Eventually her body failed and she became wheelchair-bound. Mr. Ladd quit the business world to care for her, manage their two estates and go yachting. Mr. and Mrs. Ladd occupied separate sides of the second floor ­ bedrooms with sitting rooms.

Meanwhile, Kate was busy at the most important work of her life ­ helping ladies in distress who had to support themselves. In 1908, she turned one of the estate's houses into a convalescent home for "deserving gentlewomen who are compelled to depend upon their own exertions for support shall be entertained without charge..." Walter established a fund to ensure the work's continuation, and when his wife died, the entire estate was turned over to the fund and the facility moved to the mansion.

Small rooms that housed the ailing straddle the long skinny second-floor corridor. Metal clothing cabinets still stand in the rooms. Renovations were made to bring the convalescent home to code, like the addition of an industrial kitchen. The dramatic spiral staircase that had graced the mansion's entrance was removed to make way for an elevator and telephone booths. The juxtaposition of grandeur and institutionalization is disconcerting.

In 1983 the convalescent home closed and the King of Morocco bought the house that same year for $7.5 million. It is said that Malcolm Forbes owned a home in Morocco, knew the King and told him about the house on the hill in the Jersey countryside. In the 20 years King Hassan owned it, he never spent the night. There were no galas or parties to brighten the house or to warm its ovens and 20 fireplaces ­ just cold walls through the seasons. He visited Natirar three or four times before he died in 1991, according to a local source. Natirar was inherited by his son, King Mohammed VI of Morocco. During these years some staff lived in an outbuilding, and one person lived in a couple rooms.

To this day the house remains silent ­ with memories in small rooms under eaves that once knew a simple elegance and lives untold. Memories hide in leaded glass that look onto rolling lawns and in fireplaces that warmed the big rooms. They hide in the stables where horses whinnied waiting to be saddled, in the terraced formal gardens and among the hickories and oaks that stretch down to the river.

Destiny's place -- a mansion that was never really a home in the conventional sense. But soon its rooms and landscape will be filled again. The county hopes to recreate what was here before ­ including the reinstallation of the grand staircase, now housed in one of the outbuildings. Its heritage as a working cattle and haying farm will be maintained. Its trout streams will be protected. The Raritan supports a healthy trout fishery, and the Peapack, its tributary, supports breeding populations of the threatened native brown trout.

The mansion, two cottages, carriage house and greenhouse stand on acreage leased to Sir Richard Branson. ­Now known as Ninety Acres, the house and property continuee on as an exclusive full-service spa, conference center and restaurant. The other 403 acres are maintained as open space. "The concept is grand as far as multi-use," says Boccino.

"The King's representatives were very happy to negotiate with us," he says. "They liked what the Commission stood for and what we're going to do with the property. They weren't going to maximize the dollars to sell it, so that also worked to our advantage. We were fortunate to find people who want to preserve the land and were able to negotiate in order to preserve it. We were very lucky with the King's representatives that they wanted to do this with us, so that made negotiations go very smoothly."

The main focus of the plan is to preserve the area as part of a Greenway. "We envision making connections with local greenways, parks and state parks. We hope to have continuous linkage along the river corridor."

"This property is unique," he says. "We've never purchased a property with this much history and character." The gatehouse is located on Peapack Road, near the intersection of Routes 206 and 202.