Take a Float on the Wild Side

Amid the quaint architecture of the thriving historic town of Sparta, I strike out to follow the tiny but mighty Wallkill River on its 88.3-mile journey north into New York State where it empties first into Rondout Creek, then together into the Hudson River. The Wallkill River shares with great rivers like the Nile and the Rhine the peculiarity of northward flow. From out of Lake Mohawk, it spills over a dam then becomes a stream, on this day bubbling and rushing fast, seeming most determined to be free. Unseen by most, it runs through town parks, woodland, and past parking lots and businesses. It’s dammed in Franklin to form Franklin Pond, the town’s reservoir, and, in Hamburg, is stocked with trout before it flows through the Wallkill River National Wildlife Refuge and into New York. (For a glimpse of the Wallkill River’s humble beginnings, turn onto West Shore Drive on Lake Mohawk and park near a small bridge.)

A friend and I catch up with the river at Bassetts Bridge Road in Vernon Township, within the Wallkill River National Wildlife Refuge, and carry the kayak to the put-in. The river is calm with a few ripples and mud banks ahead, scoured clean by higher waters. Reed canary grass, considered an invasive species, lines the banks. An eastern painted turtle suns on an island of fallen trees, spatterdock roots, duckweed, and sprouting plants. The river curves gently past arching silver maples. Red-winged blackbirds, three goldfinches, and a black and orange bird fly by.

The land is so green, the sky so blue, you’d think it was photoshopped. Strong reflections sometimes blur the lines between terra firma, sky and water. Everything’s a photo. Among the song and chatter of birds, a cackling sound is heard. Do hyenas live here? Does the openness of the river corridor increase the potential for birdsong? There’s room for imagination and wonderment on this river. What are the birds saying? Long brown dead grasses from last year piling up on a fallen tree looks like Cousin It. Nature’s sculptures abound. 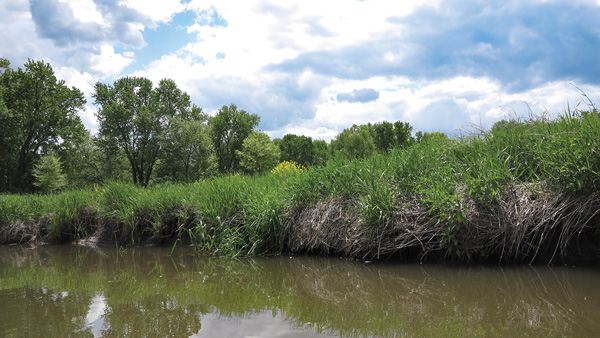 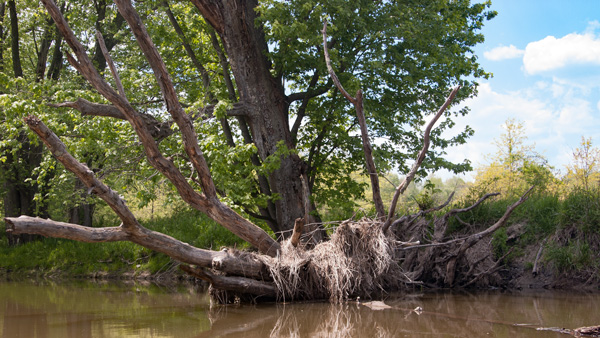 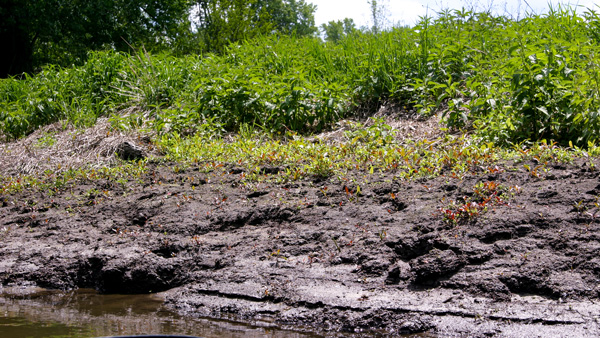 The mud bank holds treasures of plant and critters and their tracks. 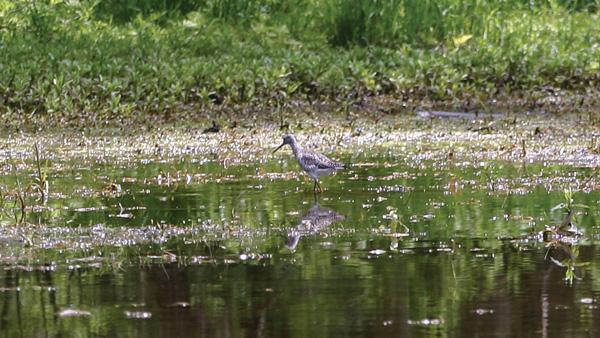 Killdeer inspect the menu beneath the surface.

A tributary is stalled by a dam built by expert beavers. 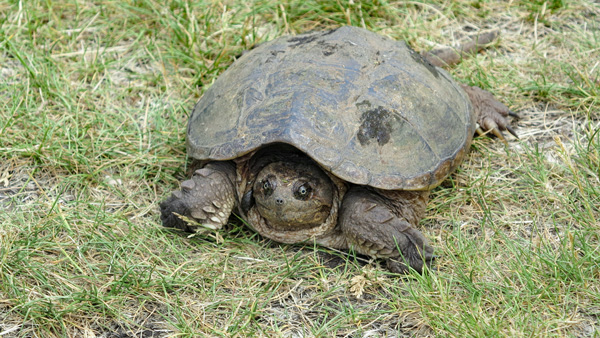 A snapping turtle stopped in his tracks watching me, perhaps wondering if I am the enemy. He is frozen in time and doesn’t even blink, his beady eyes staring. 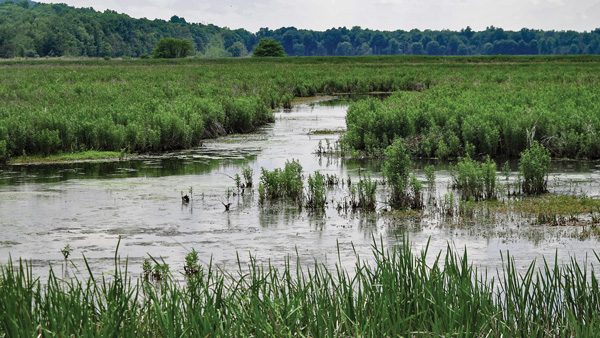 The Liberty Loop Trail surrounds the Refuge’s freshwater marsh, which is managed for shorebirds and waterfowl.

We head south, paddling against the river’s passive flow. The heart-shaped leaves of spatterdock, a water lily relative, rise above the water and form colonies near the shore, their yellow flowers soon to bloom. We float past a stand of willows, as skillfully placed as any talented landscape designer. A tributary on the left is stalled by a dam built by expert beavers. Suddenly the birds are quiet.

The stream narrows, and we glide to the side where it is about five inches deep. In the shallow water topped with duckweed and algae, killdeer hunt for food. A big splash, perhaps a frog from a spatterdock leaf—though, later, Tom spies a fish jumping out of the water. A silver maple’s skeleton, worn smooth by time and water, is river art. Here the mud bank is as wide as the river. It holds treasures of plants and critters and their tracks. We turn at the bend, water and sky as one, tree art overhanging the surface, pastel sky and clouds almost as one. The kayak glides north on the placid river, the quiet water rippling gently around us.

The hunt for this lazy river picks up on the two-and-a-half-mile Liberty Loop Trail at the Refuge’s parking lot on Oil City Road in New York. The Loop transverses the state border. The trail surrounds the Refuge’s impoundment, aka freshwater marsh, which is managed for shorebirds and waterfowl. Its many ditches are fed by the Wallkill River and rain. Water levels are regulated according to season and what’s migrating. The water is drawn down for migrating shorebirds to find invertebrates in the mud flats and is raised to six to twelve inches for waterfowl like dabbling ducks, green-winged teal and ring-necked ducks that feed on vegetation such as smartweeds, sedges and rushes.

“We manage water levels in the impoundments to provide stopover and resting habitat for shorebirds and waterfowl during their spring and fall migrations,” says Marilyn Kitchell, Wildlife Biologist for Wallkill River, Cherry Valley and Shawangunk Grasslands National Wildlife Refuges. “Water depths within the impoundments (which are fed by rainfall and the Wallkill River itself) are controlled by manipulation of boards either placed into or removed from water control structures. We also have some control over the directionality of flow either into or out of the impoundments, depending on water levels within the river.”

Nature’s garden borders the wide grass path: bladder campion and cow parsnip, mustard, milkweed and thistle, with Pochuck Mountain as backdrop. The wetland here has several layers of plant types: open water with flooding and attendant emergent species—those ground-rooted plants with floating leaves. And suddenly, joy to behold! A snapping turtle stopped in his tracks watching me, perhaps wondering if I am the enemy. He is frozen in time and doesn’t even blink, his beady eyes staring. Elsewhere, frogs croak and birds sing, blue dragonflies dart and an orange-brown butterfly moves so fast I can’t see his spots. Last year’s flowers of phragmites and cattails sway above the layers of ditches, water and wetland plants. They, too, are layered: cattail in wetter ground and phrag in a bit higher and drier.

The path turns right and becomes an old gravel road on the way to the river. Yellow clover and an army of yellow hawkweed color the view of the ditches while wild madder with white, tiny star-shaped flowers under sumac, wild cherry and maple border the other side of the path. A few trees stud the impoundment. Here the trail runs between woodland and marsh. You can soon take a rest on a bench where the Appalachian Trail (which crosses the marsh) slips into the woods on a boardwalk. Soon through the trees in a wetland on the right, a chartreuse landscape decorated with dark skunk cabbage appears pretty as any planted garden. Quacking and cackling loud unseen birds accompany me down the wooded avenue, signaling my arrival.

The river is nowhere in sight, so upon turning around, I soon make a left onto the Appalachian Trail (AT) that crosses the impoundment and follows the Loop for 1.5 miles. A ditch, that is connected to the river, runs alongside the trail now. I spy Canada geese with babies in the marsh, and Red-winged Blackbirds perching on the thinnest stalks. Towards the next turn the trickle still follows and I see the river ahead through the trees , but the Loop cannot take me there. Jack-in-the-pulpit grows on the banks with wild impatiens. The trail is lined with last year’s evening primrose seed stalks and wild geraniums. Back in the parking lot, I hop in my truck and drive a half-mile north to the river on Oil City Road. Here you can fish and kayak and walk the flat two-mile Winding Waters Trail.

But first, the river, here wide and calm. Cliff swallows built mud nests here, on the underside of the bridge. They swoop above the river catching insects. Bring lunch to enjoy a little up the gravel road/trail where an unusual wildflower, centaury, grows beside a picnic area. The yellow flowers of spatterdock lay on the water’s surface here, following the river on its journey. Invertebrates find cover under its huge leaves; ducks and birds eat the seeds; and muskrat and beaver eat the roots. The path slides away from the course of the river, but I hear it rushing to the Hudson though I cannot see it unless I tromp through the weeds. But it continues on, ultimately to the sea.

The Wallkill flows north out of Lake Mohawk, draining the eastern half of Sussex County, and flows throught the Wallkill River National Wildlife Refuge before leaving New Jersey.

Buy direct from the grower and save! Large selection of annuals, perennials, herbs, vegetables, hanging baskets, deck planters, succulents, tropicals and more. 10% off annuals for seniors on Tuesdays and everyday for Veterans and Master Gardeners. Fresh eggs daily.

Thousands of photos and artifacts document the lake's long and illustrious history. Open every Sunday through June, 12-4pm, October thru May. Free admission, parking.