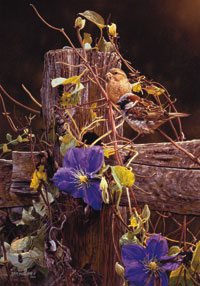 John’s subjects include a wide variety of wildlife, landscapes, and people in Northwest New Jersey and the eastern United States. To contact the artist directly regarding his work or commissions, please call 917-330-2382.

This and other limited edition prints are available through Millpond Press, 800-535-0331. Mullane's biography as published by Millpond Press follows:

A true artist sees what the average person does not, finding something exceptional in the everyday and something extraordinary in the ordinary. John Mullane sees the beauty of nature in urban environs where it could easily be overlooked. 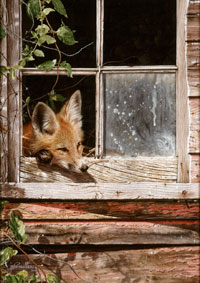 Mullane loved art since he was a youngster, and his parents encouraged him with instructional books on animal drawing. He intended to become a portrait artist, but instead pursued a career as a drummer along the way. His band, “The Raw Poets,” recorded demos with rock musician Roger Daltrey, former lead vocalist of Who fame. Despite the fact that Mullane gave the music business his all for seven years, success as a musician eluded him.

It was during this time that, by chance, he happened upon a book of wildlife art. Until that moment, he had never considered painting wildlife. “Music had taken me away from art,” he noted. “I got interested in painting and focused on it when I discovered The Art of Robert Bateman in the library of The Fashion Institute of Technology in 1988. It inspired me to see if I could paint wildlife, and so I taught myself over the next couple of years. That one book changed the entire direction of my life.” 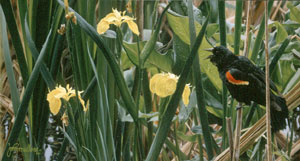 The Bronx is home to Mullane, his wife and two small sons. When a book signing provided an opportunity for him to see the man whose art had influenced the course of his life, Mullane was thrilled to meet Bateman, telling him, “I’m a wildlife artist from the Bronx.”

In 1992, Mullane submitted what was his first serious attempt at painting wildlife, entitled Baby Jay, and incredibly, his painting was accepted into the prestigious “Birds in Art” exhibition at The Leigh Yawkey Woodson Art Museum. Displayed in the same exhibition were paintings by some of his artistic heroes, including Bateman and Brenders. For Mullane, it was an overwhelming experience to have his own work shown alongside those of such legends.

A New York gallery began to show Mullane’s work, and when the first piece sold, the artist was called to pick up his check. Once he got to the gallery, he saw his painting hanging next to a Bateman and, in his excitement, forgot about the check. Mullane began accepting commissions in 1994, and today, a decade after first beginning to paint, he finds himself unable to keep up with collector demand for his work. Making reference to a former job in Manhattan, he says with a smile, “My collectors refer to me as ‘The Doorman Artist.’”
Mullane conducts fieldwork in nearby Central Park and at The Bronx Zoo, taking photos and sketching. After he selects the subject, he researches the background. “I try to find ordinary things that inspire me. For me, there is something exciting about bark.” Few people possess this level of appreciation, and for Mullane, it was a revelation to read Carl Brenders’ book and discover another kindred spirit who shared his enthusiasm. “I’ve always felt the need to say as much as I could about the subjects that I paint,” he notes. 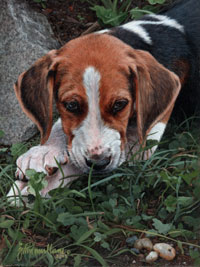 Equating his painting process to putting together the pieces of a puzzle, Mullane gathers his reference materials and brings them back to the studio where he does watercolor value studies and thumbnail sketches to find the ideal composition. His preferred medium is acrylic, but he will occasionally use gouache and watercolor.

Mullane’s fascinating compositions celebrate the harmony, rhythm and timelessness of nature. Abstract patterns of slow-growing lichens and mosses are juxtaposed against moments as fleeting as the flick of a squirrel’s tail. With each viewing of his intriguing paintings, something new and delightful awaits discovery within a mosaic of textures, reflections and shadows. The art of John Mullane reveals the wonder of the familiar.

Some Mullane originals are available at Decoys and Wildlife Gallery in Frenchtown, 888-996-6501.

This story was first published: Spring, 2004