"Don't be scared if a man like this is in your house," Tim Apgar says. A fireman at Whitehouse Station, Tim points to sssWalter Dorff. Walter does, in fact, look menacing. A black, protruding whole face mask covers his features. Walter waves at the children.

Seated on the floor of the garage, a dozen children stare at Tim and Walter. Their mothers arrange presents and prepare for the arrival of a birthday cake. The activity doesn't distract the children. The youngest, barely three years old, maintain an orderly row, as neatly arranged as the rack of fire suits and helmets hanging by a wall. A familiar maxim comes to mind: a place for everything and everything in its place. 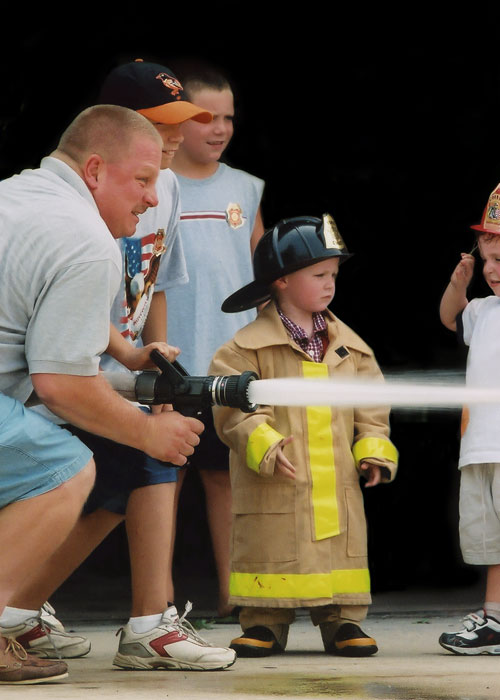 Clad in a pint-sized fireman's suit, the three-year-old birthday boy, Jonathan Apgar, listens intently while his father runs through the drill. "What do you do in case of a fire? Where is your emergency exit?" Hands shoot up. This particular Saturday, the kids know the answers. They should; most of them are the children of firemen.

Tim finishes the refresher course and turns the children loose to climb over the trucks. Pulling a hose out to the driveway, Tim reduces the water pressure to two gallons per minute, which is still strong enough to knock the biggest children backwards. He helps the children aim a jet of water at a driveway cone; the cone goes flying. The children go for rides around the block in a lime green fire truck. Walter Dorff suits up a second time and dons a huge synthetic Dalmatian head. The children regroup for the birthday song and a red birthday cake shaped like a fire engine. Walter hugs the kids.

The party lasts two hours. As the children wave goodbye the adults clean up and head to the back rooms that resemble the inner sanctum of an old club. Steer horns, decorated with toy Dalmatians, jut out over the bar. Collections of trophies and old hats fill display cases. The men and women relax from the afternoon's effort. A typical birthday party at WSFD fulfills multiple important agendas: safety awareness, fund raising, and public relations.

"Fire is nondiscriminatory." Lenny Dante, a former Chief at Pottersville Fire Company considers the consequences of a blaze. "It doesn't matter if you're rich or poor."

Humans, however, are highly discriminatory; fires can stem from malice or mistakes. Lenny still remembers a lethal fire ­ a girl died ­ that the arson squad considered suspicious. Another tragic fire occurred in Bedminster, a few days before Christmas. A mother and daughter had hidden a Christmas tree extension cord under the carpet. As they walked across the carpet, the cord became frayed. The fire departments responded to a call. "It was cold as hell," Lenny remembers. The township had to salt and sand the road for the tankers drawing water from hydrants on Route 206. As chief engineer running the pumps, Lenny saw the bodies come out. "That's what hurts, when you see that," he says.

Firemen struggle to prevent such tragedies ­ hence the lectures at birthday parties, schools, and countless community events. Perhaps the largest safety awareness events occur in October, with Fire Safety Awareness Week. WSFD will host an open house on October 8th, from 1-4 p.m. Members of the police department and rescue squad (and Smoky the Bear) will be on hand for demonstrations and to answer questions. They will fill a safety trailer with a harmless smoke, so the kids who enter will learn how to handle the confusion and perhaps appreciate the importance of an exit strategy. The event pulls in families; the first responders see between fifty and one hundred children.

Other departments will present different activities, but the motivation -­ a profound commitment to the community ­ remains the same. It also leads to an ongoing quest for better gear and training for both firefighters and the public.

That quest creates a dilemma. Despite their role as public servants, many firefighters are volunteers. Stations receive some contributions from municipalities and the state, but the departments raise much of the money for upgrades and equipment themselves. Improvements run up significant costs: $200,000 might buy a pumper that handles 1,250 gallons per minute. A ladder truck that pumps 2,000 gallons per minute costs approximately $500K. An aerial truck (capable of sending hose-bearing firemen up dizzying heights) runs from $600,000 to $800,000. Then there are the suits and safety gear and training and modifications and improvements and the station houses themselves.

Raising the difference means convincing the locals to contribute what amounts to a voluntary tax. To achieve that goal requires extraordinary efforts. A look at the hours ­ and years ­ logged by firefighters gives a sense of the extent of their devotion and commitment. At Whitehouse Station one firefighter has served over fifty years. Others have served over forty years. For a good chunk of their time, firefighters and their families come up with ways to raise money. They spend countless hours parking cars at 4-H fairs and over the Fourth of July. They host birthday parties, weddings, retirement gigs and bridal showers. They run antique shows and stand in the street with buckets for a coin toss. On November 12th they will host a craft show.

None of this is new; New Jersey firemen have a long history of singing for their supper. A 1936 newspaper clipping at WSFD mentions a minstrel show that year to raise funds. Another clipping from the 1950s touts a Western and Hillbilly Show starring Yodeling Mickie Evans and Her Boys.

Throughout north Jersey similar activities take place in local departments. Hampton Township Volunteer Fire and Rescue raises money for 65 firefighters, fire police and first responders with Easter flower sales, barbeques, raffles and pancake breakfasts. In September, HTVF runs flower sales and hosts a beefsteak dinner; on November 11th it will host a tricky tray. Some months Firehouse #1, with its barbecue pit, is available for rent. Public events are scaled to reflect the size of the town. Tiny Pottersville hosts an antique show and pancake breakfast.

A not-so-subtle message, fueled by a growing interest in old fire apparatus, helps fundraising. Old trucks remind the public of the rich history of fire and rescue ­ and the vast improvements over the years.

The evolution is vividly depicted at the New Jersey Firemen's Home in Boonton. Visitors pass a statue of a fireman holding a child, then turn up a long drive to a regal yellow brick building that dates back to the early 1900s. The fire museum occupies the front left wing. Reminding visitors of firefighters' dedication and sacrifice, a beam from the World Trade Center stands by the entrance. 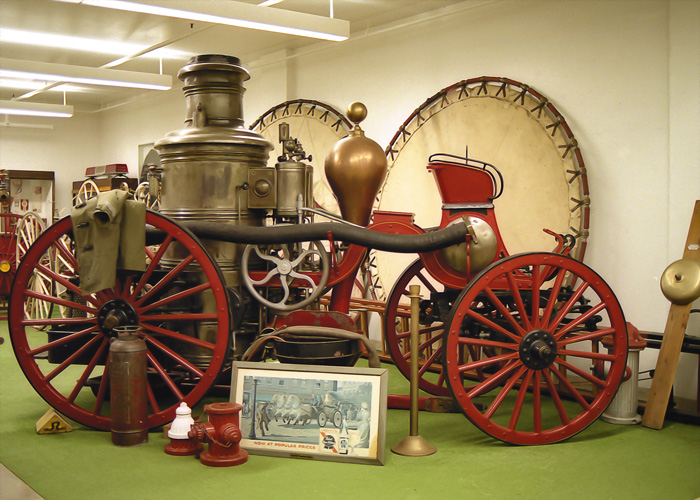 The Firemen’s Home in Boonton is also home to an 8,000 sq. ft.,
two-story museum, which opened in May 1985.
This five-ton, horse-drawn steam pump from 1890
is one of many items on display including steamers,
ornate hose carts, and fire trucks.

Statues, mannequins, truck and car toys, old books, hats, plates, mugs, shields, flags, shovels, suits, old photos, and drawings depicting extraordinary efforts to save property and lives fill two floors. The spookiest pieces might be the old trampolines that would lure only the truly desperate. The most spectacular pieces are the horse drawn carriages ­ among them a white 4-wheel hand-drawn horse carriage from 1890 and a 5-ton horse drawn steam pump from 1890.

On September 24, the Firemen's Home will host a Fire Apparatus Muster. Now in its 24th year, the muster is free to the public who come to see antique and vintage fire apparatus ­ and to stroll through a flea market. Organized by the Antique Fire Association of New Jersey, entrants compete for 80 prizes.

Good chunks of New Jersey's firefighting history can best be found in the memories of the men who reside at the Firemen's Home. Retired firefighters who spent their lives around trucks and gear are often happy to talk to visitors about the past.

On warm days, the more mobile men scatter through facility. Some smoke cigars on a patio overlooking the grounds where deer graze at the edge of the trees. Inside they might gather in a recreation room to watch TV or read (papers and magazines include The New York Times and Firehouse Magazine). They play bingo, enjoy entertainment in the auditorium, exercise, and attend religious services. With two key differences, the Firemen's Home resembles many long-term care facilities throughout the state ­ the residents are male, and their care comes with a truly deep discount.

As Mr. Konrad (Konnie) Mallet, the Warren County Executive Committee Representative for the NJ Firemen's Relief Association, explains, "two percent of the homeowner's insurance premium that is allocated for fire damage goes to the relief association." That allocation pays for the annual convention ­ and care at Boonton.

With 79,000 members, the relief association provides a small cushion for volunteer firemen who might receive a Federal benefit for an injury incurred in the line of duty, but no pension. Through the relief association, when the time comes that the former firefighters need long-term care, both volunteers and pensioners receive a discounted rate, currently $850 a month, at Boonton. It is the only place of its kind in New Jersey.

"Some of these guys are from south Jersey." Lenny Dente says. "I'm lucky. I grew up in Peapack. I've got six brothers nearby." Now the President of resident hall, Lenny copes with Multiple Sclerosis. He looks forward to visitors and a menu with choices, but he remains a fireman. Like most of the other residents, items relating to firefighting are displayed in his room. (A mounted display case contains a model water tanker.) His history is typical, at least among his brethren. Driven by an urge to do something for the community, he began volunteering thirty years ago. If he had been tempted to go with the police, his fate was sealed when he saw fire trucks in a parade.

Thirty years later, Lenny becomes a gear head when he talks about the trucks. His delight comes through quite clearly when he describes a truck built at Pottersville in the 1970s. They built a tanker onto the "horse" ­ the cab, engine and frame of a used oil truck. He is still proud of the self-made tanker, with its 3,200 gallon capacity.

He will also share stories of fires. "The biggest fire was a house fire on Tewksbury's Hell Mountain," Lenny says. "It was an electrical fire in the basement at night. They kept smelling smoke. Then the fire blew up through first floor." He pauses, pleased with one part of the memory. "Everyone got out."

He talks for an hour. Day to day concerns ­ the upcoming convention, a new menu, visits with his family -­ weave through his stories. He is firmly rooted in the present. But asked if he would return to the fire department, he doesn't pause to reflect.