Production companies and presentation houses require different, but equally challenging skills, to survive. Getting people off the couch and away from their flat screens is no easy task. Here is how a local professional theater manages to satisfy a widely diverse audience, sometimes with as much drama off as on the stage. 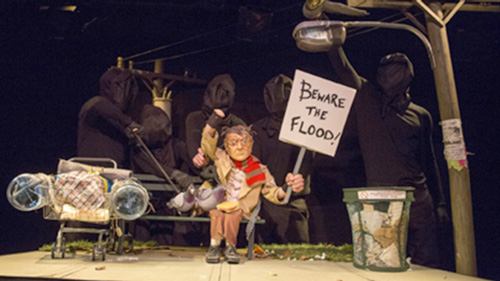 At first glance, life at a presenting theater appears relatively simple. Booked a year in advance, full-blown productions roll into town like traveling circuses. But presentation theaters have their own elaborate requirements. The search for talent often requires Alan Liddell, Director of the Nash Theatre to travel thousands of miles a year.

Cindy Alexander, a seemingly unflappable theater manager, handles contract fulfillment. A concert pianist might request a nine-foot grand piano of a specific vintage from Steinway. Dancers need a comfy stage to warm up on. In addition, Ms. Alexander adds her own signature touch to ensure a pleasant environment. "I try to create an atmosphere that leads to the best work," she explains. "For Patti Page, who had just won a Grammy, I found some old albums which we gave out as prizes. We had a cake ready for after the show."

Her job could intimate the most experienced wedding planner. Talent comes from around the world. Acts have included the Moscow Ballet, the Bulgarian State Opera, and the Peking Acrobats. Translators help, but routine proves indispensable.

Technical support for a show typically arrives early in the morning. The crew sets the rigging, lights and sound. Ms. Alexander might still have to provide meals, airport transportation, shuttle runs to the hotel, a furnished dressing room, and an area to sell merchandise. Meanwhile, buses stuffed with set pieces, crewmembers, and performers arrive throughout the day. When the performance ends, what goes up must come down; crews often load out until the wee hours of the morning.

To serve the theater's diverse audience, the process must function as a well-oiled machine. The folks at Nash Theatre seem to have a knack for controlling chaos. Not surprisingly, financial support comes attendant on that ability. As another not-for-profit, Nash depends on public and private subsidies. Recent funding led to upgrades, including new seats and carpeting in the 1,000-seat theater. Improved ticketing software allows patrons to choose and buy their own seats on line. "We try to make it easy for guests," Ms. Alexander explains. "We also offer free parking."

Ms. Alexander possesses a remarkably sensible outlook. If the former actors' agent knows any tales of behind-the-scenes drama, she doesn't tell. She rolls her eyes. "Everyone has heard about rock stars who want the green M&Ms removed from the candy jar. We don't get that." When necessary, Cindy takes matters into her own hands. When a concert violinist, en route to that evening's performance, called to report a broken-down vehicle, Nash's Theater Manager went out in the snow. She found the musician a short distance from Newark Airport, but the violinist neglected to mention companions. Ms. Alexander jammed the violinist, the violin, and the musician's mother, father, aunt and uncle into her car and drove them to the show. "We got here," she says.

There is a Major Artist Series, the Family Series, a Sunday Sampler Series, Tuesdays With Stories, and Club 28, a relaxed on-stage cabaret setting. There are also special school and community performances throughout the year.